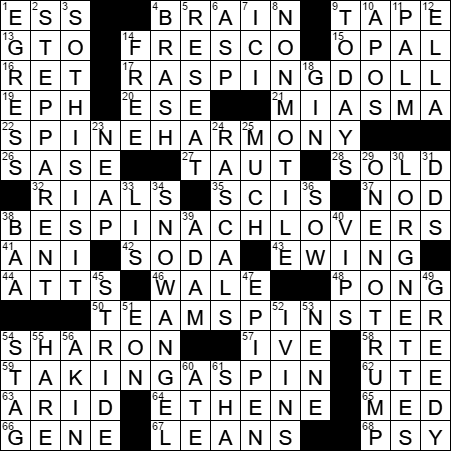 Each of today’s themed answers is a common phrase that TAKES A SPIN, has the word SPIN inserted:

There’s a letter S (ess) at the start of the word “something”.

The 1964 song “G.T.O” was the debut recording for the surf rock group from the sixties known as Ronny & the Daytonas.

Colin Powell was the first African American to serve as US Secretary of State. Earlier in his career, Powell had been a four-star general in the US Army, as well as Chairman of the Joint Chiefs of Staff during the Gulf War. Even though Colin Powell has retired from public service, he is one of the most noted moderate Republicans, often advocating support for centrist and liberal causes.

Mario Puzo created the Corleone Mafia family in his 1969 novel “The Godfather”. The head of the family is Vito Corleone (whose birth name was Vito Andolini), a native of Corleone in Sicily. He was given the name Corleone by immigration officers at Ellis Island. Don Corleone was played so very memorably, with a distinctive rasping voice, by Marlon Brando in the 1972 movie adaptation.

Bobblehead dolls are those little toys with big heads that bobble around if tapped, while the body remains still. They’re often given to ticket buyers at sports events as a promotion.

It seems that the Epistle of Paul to the Ephesians (EPH) is now regarded by scholars as written “in the style of Paul” by someone who was influenced by Paul’s thought.

The word miasma was first used for the poisonous atmosphere thought to arise from swamps and rotting matter, and which could cause disease. Nowadays, a miasma is just a thick cloud of gas or smoke.

The small hammer that one raps on a table or desk to call a meeting to order, or perhaps to signify a sale at an auction, that’s called a gavel. The term “gavel” is actually American English, a word that emerged in the early 19th century.

“Rial” is the name of the currency of Iran (as well as Yemen, Oman, Cambodia and Tunisia).

Isfahan is the name of both a province and a city in Iran, located in the center of the country.

Ani DiFranco is a folk-rock singer and songwriter. DiFranco has also been labeled a “feminist icon”, and in 2006 won the “Woman of Courage Award” from National Organization of Women.

The TV soap “Dallas” revolved around the Ewing family. The show that ran for 13 years was originally intended as a five-part mini-series, with the main characters being newlyweds Bobby and Pam Ewing. But, the devious character in the piece, Bobby’s brother J. R. Ewing, became so popular with audiences that the series was extended with J. R. at the center of the story.

Wales are parallel ribs in a fabric, such as corduroy.

Back in the mid-1300s, a “spinster” was a female spinner of thread. By the 1600s, the term had been adopted as the legal designation for any unmarried who was not of noble rank, the idea being that such women occupied themselves with spinning! By the early 1700s, the term was used generally to refer to a woman beyond the usual marrying age, but still single.

A teamster was originally a person who drove a team of animals that pulled a wagon. “Teamster” became a synonym for “truck driver”, as the trade union called the International Brotherhood of Teamsters grew in importance during the Depression.

Ariel Sharon was a former Prime Minister of Israel. While still in office in 2005, Sharon suffered two debilitating strokes that left him in a permanent vegetative state from early 2006, until he finally passed away in early 2014.

“I’ve Gotta Be Me” is a song that was written for the 1968 Broadway musical “Golden Rainbow” starring Steve Lawrence and Eydie Gormé. The song was released as a single by Lawrence, and more famously by Sammy Davis, Jr. around the same time.

The Ute are a group of Native American tribes that now reside in Utah and Colorado. The Ute were not a unified people as such, but rather a loose association of nomadic groups. The word “Ute” means “Land of the Sun”, and “Ute” also gave us the state name “Utah”.

The barnacle is a marine arthropod related to the crab and the lobster. Barnacles are classified as “encrusters”, meaning that they attach themselves permanently to some solid substrate. It is thought that the name “barnacle” was applied to the marine create from the name of the barnacle goose. According to folklore, the barnacle goose “hatched” underwater, emerging from what we know today as “barnacles”.

That would be in the card game called bridge.

A lorgnette is a pair of spectacles attached to a handle on one side. They were worn more for show than they were for improving the eyesight, and were often used as a fashion accessory at the opera. They were a precursor to the more contemporary opera glasses.

In the Christian tradition, the “fall of man” took place in the Garden of Eden when Adam and Eve succumbed to the temptation of eating from the tree of knowledge of good and evil. This went against the bidding of God, and was at the urging of the serpent. As a result, Adam and Eve were banished from Eden to prevent them becoming immortal by eating from the tree of life. The first humans had transitioned from a state of innocent obedience to a state of guilty disobedience.

EpiPen is a brand name of epinephrine auto-injector. An EpiPen delivers a measured dose of epinephrine, usually for the treatment of an allergic reaction.

Molly Ivins was a newspaper columnist, journalist and political commentator. One of Ivins’ books is a “Bill of Wrongs: The Executive Branch’s Assault on America’s Fundamental Rights”.

Hares belong to the genus Lepus, and young hares, that are under one-year-old, are called leverets.

59. Enjoying the new car … or what four puzzle answers are literally doing : TAKING A SPIN

3. “I guess the moment has finally arrived” : SO THIS IS IT