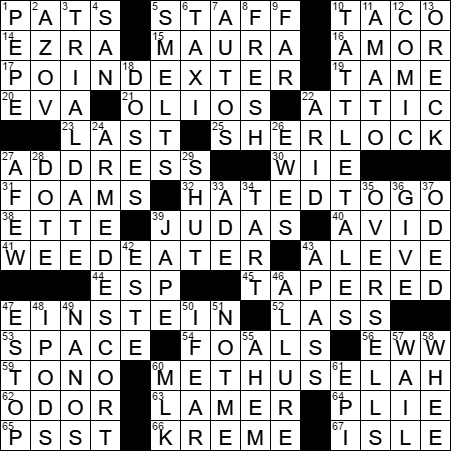 Maura Tierney is an actress from Boston, Massachusetts. Tierney is best known for playing Lisa Miller on television’s “NewsRadio” and Abby Lockhart on “ER”.

Poindexter is a character in the television show “Felix the Cat”, which originally aired in the late fifties. He is a nerdy type, wearing a lab coat and glasses with thick lenses. The character lends his name to the term “poindexter”, meaning just that, a nerd.

Eva Gabor was the youngest of the Gabor sisters, all three of whom were celebrated Hollywood actresses and socialites (her siblings were Zsa-Zsa and Magda). One of Eva’s claims to fame is the unwitting promotion of the game called “Twister”, the sales of which were languishing in 1996. In an appearance on “The Tonight Show” she got on all fours and played the game with Johnny Carson. Sales took off immediately, and Twister became a huge hit.

A marionette is a type of puppet, one that is controlled from above by a series of strings or wires. The term “marionette” is French for “little, little Mary” and is probably a reference to one of the first such puppets, which depicted the Virgin Mary.

Kung ho is a Chinese expression meaning “work together, cooperate”. The anglicized version “gung ho” was adopted by a Major Evans Carlson as an expression of combined spirit for his 2nd Marine Raider Battalion during WWII. From there the term spread throughout the Marine Corps and back to America where it persists to this day.

Weed Eater was the company founded in 1971 that invented the string trimmer used for cutting grass and other plants while protecting nearby objects. Fans of “Dancing with the Stars” might be interested in the fact that the Weed Eater was invented by George C. Ballas, Sr., grandfather of professional dancer Mark Ballas.

Albert Einstein’s first wife was a fellow student of his at the Zurich Polytechnic, Mileva Marić. The couple had a daughter together before they married in 1903, and then two sons. Albert and Mileva divorced in 1919. Albert was remarried that same year, to Elsa Löwenthal. Albert and Elsa had started a relationship in 1912, while he was still married to his first wife. Elsa had also been married before, divorcing Max Löwenthal in 1908. When Elsa took Albert’s name at the time of their marriage, she was regaining her old family name, as she was also an Einstein by birth. Albert and Elsa were first cousins.

The original “Star Trek” TV show opened each episode with a speech from Captain Kirk, played by William Shatner:

Space: the final frontier. These are the voyages of the starship Enterprise. Its five-year mission: to explore strange new worlds, to seek out new life and new civilizations, to boldly go where no man has gone before.

Methuselah was the son of Enoch and the grandfather of Noah, and the man in the Bible who is reported to have lived the longest. Methuselah passed away seven days before the onset of the Great Flood, and tradition holds that he was 969 years old when he died.

There are several species known as skunk cabbage, many of which release an unpleasant odor when the leaves are crushed, hence the name.

The French word for “bent” is “plié”. In the ballet move known as a plié, the knees are bent.

The Isle of Man is a large island located in the middle of the Irish Sea between Great Britain and Ireland. I used to spend a lot of time there in my youth, and a very interesting place it is indeed. The Isle of Man is classed as a British Crown Dependency and isn’t part of the United Kingdom at all. It is self-governing and has its own parliament called the Tynwald. The Tynwald was created in AD 979 and is arguably the oldest continuously-running parliament in the world. The inhabitants of the island speak English, although they do have their own language as well called Manx, which is very similar to Irish Gaeilge and Scottish Gaelic. And then there are those Manx cats, the ones without any tails. I’ve seen lots of them, and can attest that they are indeed found all over the island.

Smelt is the name given to several types of small silvery fish, examples being Great Lake smelts and whitebait smelts.

Something described as “tattletale” is revealing, it gives away a secret. The term is a combination of “tattle” and “tale”, and is probably patterned on the similar word “telltale”. “To tattle” means to tell secrets, and the noun “tattletale” applies to someone who tattles tells secrets and informs.

Al D’Amato was a former Republican Senator who represented the state of New York from 1981 to 1999. Outside of politics, D’Amato is big into poker and is chairman of the Poker Players Alliance, an organization that fights for the rights of poker players in the US, mainly the right to play poker online.

1963’s March on Washington was one of the largest political rallies in the history of the US, with about a quarter of a million people participating in the march itself. The rally was a call for civil and economic rights for African Americans. Famously, Martin Luther King, Jr. delivered his “I Have a Dream” speech to the protesters while standing in front of the Lincoln Memorial.

I remember listening to the full text of Dr. Martin Luther King, Jr’s “I have a dream …” speech not long after I moved to this country. I think I am man enough to admit that my eyes misted up as I listened to the words. I also recall thinking how lucky I was to have been invited to live in this great country, which was facing up to some of the sins of its past.

22. Destination for the last flight? : ATTIC

8. At risk of being slapped : FRESH