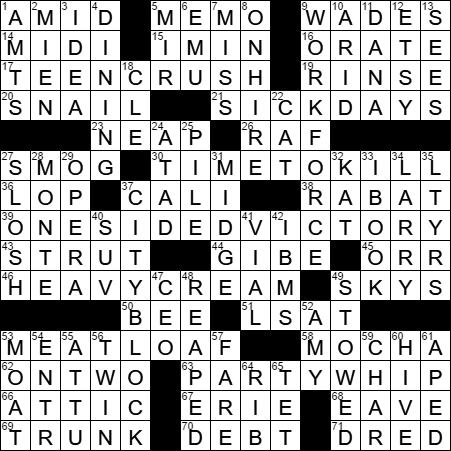 Today’s themed answers end with verbs that might be used in describing a ONE-SIDED VICTORY:

That would be in poker.

Back in the early 1800s, a “poke” was a device attached to domestic animals such as pigs or sheep to keep them from escaping their enclosures. The poke was like a yoke with a pole, and slowed the animal down, hence the term “slowpoke”.

The Royal Air Force (RAF) is the oldest independent air force in the world (i.e. the first air force to become independent of army or navy forces). The RAF was formed during WWI on 1 April 1918, a composite of two earlier forces, the Royal Flying Corps (part of the Army) and the Royal Naval Air Service. The RAF’s “finest hour” has to be the Battle of Britain when the vastly outnumbered British fighters fought off the might of the Luftwaffe causing Hitler to delay his plan to cross the English Channel. This outcome prompted Winston Churchill to utter the memorable words:

In terms of population, Cali is the third largest city in Colombia (after Bogotá and Medellin). Santiago de Cali (the full name for the city) lies in western Colombia. Apparently, Cali is a destination for “medical tourists”. The city’s surgeons have a reputation for being expert in cosmetic surgery and so folks head there looking for a “cheap” nose job. Calia has also been historically associated with the illegal drug trade and money laundering.

That would be a runway at a fashion show.

Mocha is a port city in Yemen on the Red Sea and was once the principal port for the capital city of Sana’a. Mocha was the major marketplace in the world for coffee until the 1600s, and gave its name to the Mocha coffee bean, which in turn gave it’s name to the mocha brown color, and to the flavor of coffee infused with chocolate.

The quarterback (QB) starts each play in football with a “snap” (also called a “hike”). He announces to his teammates the exact moment of the snap by calling out signals, usually including the word “hut” one or more times in a prearranged sequence.

In the world of politics, the party whip is the “heavy”, the person whose job it is to ensure that party members vote according to party policy. “Whip” comes from “whipping in”, a term used in hunting. Any hounds tending to stray from the pack were “whipped in” to prevent them wandering off. “Whipping in” hounds sounds so cruel. “Whipping in” politicians, not so much …

I found this example of a usage of the phrase “on hire” in my dictionary: “a thrashing machine went on hire from farm to farm”. It’s a line from Flora Thompson’s trilogy of novels “Lark Rise to Candleford.

The Cleveland baseball franchise started out in 1869 as the Forest Citys named after Forest City, the nickname for Cleveland. After a number of transitions, in 1914 the team took on the name “Indians”. The media came up with name “Indians” after being asked for suggestions by the team owners. “Indians” was inspired by the successful Boston team of the day, the Boston Braves.

I grew up eating Kit Kat bars as a kid, as the chocolate confection has been around since the thirties. Kit Kats didn’t hit the shelves in the US until the seventies. I’ve seen new varieties of Kit Kat over in the UK, such as an orange-flavored version, but haven’t seen anything like that over here.

A light-year (lt. yr.) is a measure of distance, not time. It is the distance that light travels in a vacuum in one year. The accepted abbreviation for a light-year is “ly”. A light-second is a lot shorter distance: about 186,282 miles.

Attu is the westernmost island in the Aleutian chain, and so is the westernmost part of Alaska. Japanese forces took the island in October 1942, eventually landing as many as 2,900 soldiers there. In May 1943, the US Army retook the island in twenty days of fighting that is now called the Battle of Attu, the only land battle to take place on US soil during WWII. I am very proud of my father-in-law, who served in the Aleutians in WWII …

9. Strolls through the shallows : WADES

30. A few hours for doing whatever : TIME TO KILL

50. One hovering around the flowers : BEE

9. Company employees, as a group : WORKFORCE

48. Gathered from the field : REAPED