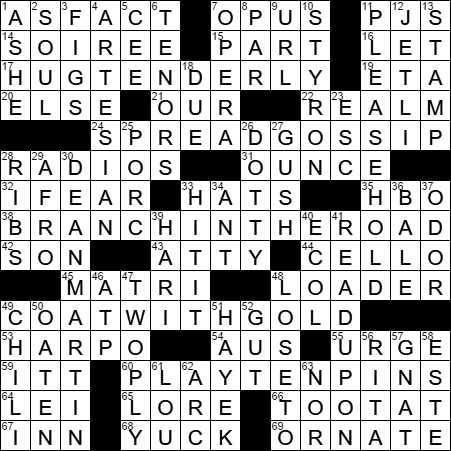 Theme: On the Table

Today’s themed clues might be things that we see on the dinner table, but they aren’t ….

That would be in tennis.

When two people are “spooning”, cuddling in bed perhaps, the person in the back is referred to as the “big spoon”, and the person in front is the “little spoon”.

“The Fault in Our Stars” is a 2012 novel by John Green that was adapted into an extremely successful film of the same name in 2014. Both film and novel are about two teenage cancer patients who fall in love with each other. The title is a rewording of lilnes spoken by Cassius in the play “Julius Caesar” by William Shakespeare:

The fault, dear Brutus, is not in our stars,
But in ourselves, that we are underlings.

A beaver hat is one made from beaver fur that has been “felted”, made into felt cloth. Top hats were often made using felted beaver fur, until silk versions started to become popular in the mid-1800s.

“Girls” is an HBO comedy-drama series that was created by and stars Lena Dunham. The show follows a group of female friends living their lives in New York City. Good show …

The Arthur Ashe Stadium in Queens, New York opened in 1997 and for years was the largest outdoor, tennis-only venue in the world. The stadium was often criticized for not having a retractable dome to protect the playing surface from inclement weather. Well, that changed in 2016 when the stadium debuted its new retractable roof, a $150 million investment in the facility.

The third plant named in the Bible, after the Tree of Life and the Tree of Knowledge, was the fig tree. Adam and Eve used leaves from the fig tree to sew garments when they realized that they were naked.

An artesian well is one that is drilled into an artesian aquifer. As the groundwater in the aquifer is under positive pressure then the water in the well rises without having to be pumped.

There are two letters C (cee) in the word “Chicago”.

The opera “Dido and Aeneas” was written by English Baroque composer Henry Purcell. The story was taken from Virgil’s epic poem “Aeneid” and tells of the love affair between Dido, the Queen of Carthage, and Aeneas, the Trojan hero.

“Lie Down in Darkness” was the first novel by American writer William Styron, published in 1951. He completed it when he was just 26 years old. Styron went on to write “The Confessions of Nat Turner” (1967) and the harrowing “Sophie’s Choice” (1979).

That would be holding on a telephone.

The escape key (esc) was originally used to control computer peripherals. It was a key that allowed the computer operator to stop what the peripheral was doing (cancel a print job, for example). Nowadays the escape key is used for all sorts of things, especially in gaming programs.

Dean Martin was the stage name of singer and actor Dino Crocetti. Martin was famous for his numerous hit songs such as “That’s Amore”, “Volare” and Everybody Loves Somebody”, as well as his film career with Jerry Lewis. Off screen, Martin was a member of the famous “Rat Pack” as he was a great friend of Frank Sinatra. Martin was always associated with Las Vegas and when he passed away in 1995 the lights on the strip were dimmed in his honor.

Cheerios breakfast cereal has the distinction of being the first oat-based cereal introduced into the market, hitting the grocery store shelves in 1941. Back then, “Cheerios” were known as CheeriOats.

The New Yankee’s baseball team of the late twenties had a particularly successful core group of batters. That line-up was nicknamed “Murderers’ Row”. The most famous “Murderers’ Row” played with the 1927 Yankees, and was made up of: