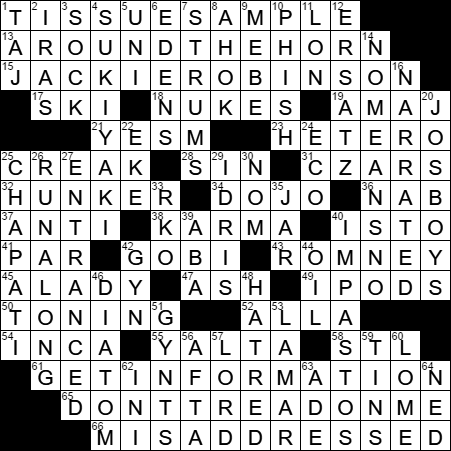 “Around the Horn” is a 30-minute sports roundup aired everyday on ESPN. I’m told that the show takes the format of a debating panel game.

“42” is an excellent film about the baseball career of Jackie Robinson. Stars of the movie are Chadwick Boseman as Robinson and Harrison Ford as Branch Rickey, executive with the Brooklyn Dodgers. The plot revolves around the signing of Robinson with the Brooklyn Dodgers, making him the first African-American player to break the baseball color barrier.

If I had to name which of Beethoven’s symphonies I listen to most often, at the top of the list comes the 7th followed closely by the 9th, and then the 5th a little further down. But that four-note opening of the 5th … that is superb …

The prefix “hetero-” comes from the Greek “heteros” meaning “different, other”.

Karma is religious concept with its basis in Indian faiths. Karma embraces the notion of cause and effect. Good deeds have good consequences at some later point in one’s life, future life, or afterlife and vice versa.

Luck Be a Lady is a song written by Frank Loesser for his Broadway musical “Guys and Dolls” that premiered in 1950. Some years later, “Luck Be a Lady” became a signature song for Frank Sinatra.

A “quipu” is a device used by the Incas for recording numbers. It is made of colored threads that are knotted, and used the base ten number system. The word “quipu” is sometimes translated as “talking knots”.

The St. Louis Cardinals baseball team was originally called the “Brown Stockings”, changing their name to the “Perfectos” in 1899. The new name obviously didn’t go down well with the locals, as the owners changed it one year later to the Cardinals, a nod to the cardinal red color of the team uniforms. Team nicknames include the Cards, the Redbirds and Birds on the Bat.

A unitard is like a leotard, except that it has long legs and sometime long sleeves. It wouldn’t be a good look for me …

Something described as “ersatz” is a copy, and usually not a good one. “Ersatz” comes from the German verb “ersetzen” meaning “to replace”.

The English actor Idris Elba is probably best known in North America for playing the drug lord Stringer Bell in the marvelous HBO drama series “The Wire”, and the title character in the 2013 film “Mandela: Long Walk to Freedom”. Off the screen, Elba works as a disk jockey using the name DJ Big Driis.

“Impasto” is a painting technique in which a canvas is either partially or completely covered in a thick layer of paint in which the brush or painting-knife strokes are clearly visible. This texture results in a painting that appears to have paint coming out of the canvas. “Impasto” is an Italian word meaning “dough, mixture”.

The diatom is a very common type of plankton. Most diatoms are composed of just one cell, but can band together and form filaments or ribbons that are in effect colonies of individual diatoms.

Kendrick Lamar is a hip hop singer from Compton, California. Lamar’s full name is Kendrick Lamar Duckworth, with the singer’s given name in honor of Motown artist Eddie Kendricks.

Lord Voldemort (born Tom Marvolo Riddle) is the main “bad guy” in the “Harry Potter” series of books. I heard author J. K. Rowling on the radio some time back and she tells us that “Voldemort” is supposed to be pronounced with a silent “t” on the end, so it sounds kind of French. But when the movies came out the actors went with the hard “t”, and that’s the pronunciation that seems to prevail now.

Lomé–Tokoin Airport is the main airport serving Lomé, the capital and largest city in Togo.

Togo is a country on the West African coast, one of the smallest nations on the continent. It is located between Ghana to the west, Benin to the east and Burkina Faso to the north.

Ned Vizzini is an American author of books aimed at young adults. Vizzini’s most famous novel is “Be More Chill”, a science fiction tale about a nerdy kid who takes a “magic” pill that makes him cool.

66. Likely to be returned : MISADDRESSED

14. Unequivocal rejection : NO MEANS NO!

26. Words with a dismissive wave : RUN ALONG

27. Unable to look away : ENTRANCED