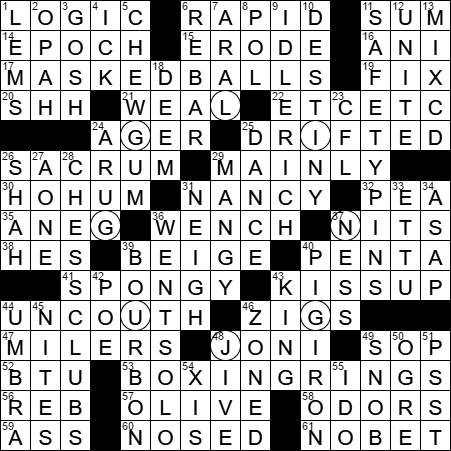 Each of today’s themed answers ends with items that can be used when JUGGLING. And, in the center of the grid we’re JUGGLING the circled letters J-U-G-G-L-I-N-G:

The information coming from adding numbers is the sum.

“Weal” is “prosperity, happiness”, and has the same roots as the word “wealth”.

A “golden ager” is a senior citizen.

Nancy Lopez is an American professional golfer and winner of 48 LPGA Tour events. Lopez turned professional in 1997 and retired in 2003. However, she came out of retirement in 2007 and is still playing today.

Sammy Cahn wrote the lyrics for “High Hopes” for the 1959 film “A Hole in the Head”, and the song won an Oscar that year. Frank Sinatra was the star of the movie, and he recorded the most famous version of the song.

A pentagram is a star-shape with five points that has been drawn using five straight lines. The name “pentagram” comes from the Greek for “five line”. The shape is sometimes also called a “pentacle”, “pentalpha” or “pentangle”. The pentagram is used as a prominent symbol in several religions and movements, notably in modern occultism.

“To curry” is to seek, at least when it is used in the phrase “to curry favor”.

The 4-minute barrier for the mile run was first broken in 1954 by Roger Bannister, when he finished in just over 3m 59s. The record for males now stands at 3m 43s. If you plan on running a 4-minute mile, you should probably be warned that this means you have to run the whole race at an average speed of over 15 mph (do the math!).

Joni Mitchell is a Canadian singer and songwriter from Fort MacLeod in Alberta. Mitchell is perhaps best known for her recordings “Big Yellow Taxi” and “Woodstock”.

The Confederate States of America (CSA) set up government in 1861 just before Abraham Lincoln took office. Jefferson Davis was selected as President of the CSA at its formation and retained the post for the life of the government.

That would be in the card game poker.

Opah is the more correct name for the fish also known as the sunfish, moonfish or Jerusalem haddock. I’ve seen one in the Monterrey Aquarium. It is one huge fish …

Orbit is a sugarless gum made by Wrigley’s. Orbit was first introduced during WWII, but was taken off the shelves in the 1980s when there was a concern that the gum’s sweetener was carcinogenic. Orbit was relaunched in 2001.

11. What can help you avoid getting stuck changing diapers? : SAFETY PINS

The Toronto Argonauts and the Montreal Alouettes play in the Canadian Football League (CFL).

The shuffle is a dance that includes a sliding or scraping step. And, that step is also known as a shuffle.

Bay is a reddish-brown color, usually used to describe the coat of a horse.

In the game of checkers, when a “man” reaches the other side of the board, it is promoted to “king”.

A shadow usually has three distinct parts called the umbra, penumbra and antumbra, with the terms most often used with reference to the shadows cast by celestial bodies. The terms can also be used to describe the levels of darkness in sunspots. The umbra (Latin for “shadow”) is the innermost, darkest part of a shadow. The penumbra (“almost shadow”, from Latin) is a lighter part of a shadow, where part of the light source “leaks” around the body casting the shadow. The antumbra phenomenon is experienced when the object casting the shadow is sufficiently far away from the viewer so that it appears smaller than the light source, with an annular ring around it. When the eye is in the shadow cast by an object that has light passing around it, the eye is in the antumbra.

11. What can help you avoid getting stuck changing diapers? : SAFETY PINS

48. Nonsense talk, whose circled letter is the start of what might be done with items in the four longest puzzle answers : JIVE