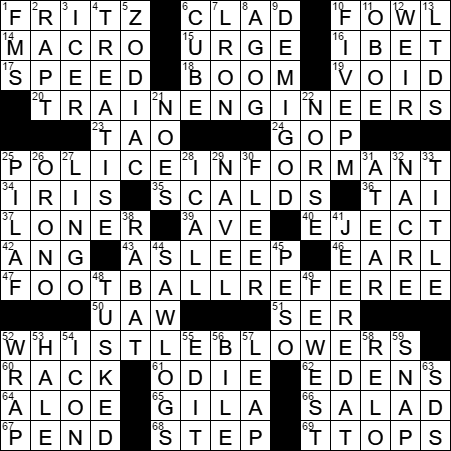 Each of today’s themed answers is a WHISTLE BLOWER:

The American slang term “on the fritz” means “inoperative”. There doesn’t seem to be a definitive etymology for the term, although there are indications it has a theatrical origin.

“Quail” is a name used for several chicken-like wild birds. Quail are common prey for hunters.

Van Gogh painted his “Irises” while he was in an asylum in the south of France the year before he committed suicide. The original owner was a French art critic and supporter of Van Gogh who paid 300 francs to purchase the painting. “Irises” was bought for $53.9 million in 1987 making it the most expensive painting sold up to that point. But, the buyer didn’t actually have the necessary funds, so it had to be resold in 1990. It was picked up by the J. Paul Getty Museum in Los Angeles, where you can see it today.

The Mai Tai cocktail is strongly associated with the Polynesian islands, but the drink was supposedly invented in 1944 in Trader Vic’s restaurant in Oakland, California. One recipe is 6 parts white rum, 3 parts orange curaçao, 3 parts Orgeat syrup, 1 part rock candy syrup, 2 parts fresh lime juice, all mixed with ice and then a float added of 6 parts dark rum.

The street names in the US version of Monopoly are locations in or around Atlantic City, New Jersey.

46. Rank between viscount and marquis : EARL

In the ranking of nobles, an earl comes above a viscount and below a marquess. The rank of earl is used in the British peerage system and is equivalent to the rank of count in other countries. Other British ranks have female forms (e.g. marquess and marchioness, viscount and viscountess), but there isn’t a female word for the rank of earl. A female given the same rank as an earl is known as a countess.

The United Auto Workers (UAW) was founded to represent workers in auto plants in the Detroit area in 1935. Nowadays the UAW’s membership extends into the aerospace, agriculture and other industries.

The city of Detroit was founded in 1701 by Antoine de la Mothe Cadillac, a French explorer. The original settlement was named for the Detroit River, which in turn takes its name from the French word “détroit” meaning “strait”. Detroit became inextricably linked with the automotive business from the very early 20th century when Henry Ford and others set up manufacturing in the area. This link to transportation led to Detroit’s nicknames of “Motor City” and “Motown”. The city’s economic strength declined at the beginning of the 21st century, resulting in a 25% drop in population between 2000 and 2010. Detroit filed for the country’s largest municipal bankruptcy in history in 2013, facing a debt of $18.8 billion. The city exited bankruptcy at the end of 2014.

Odie is Garfield’s best friend and is a slobbery beagle. Both are characters in Jim Davis’ comic strip named “Garfield”.

Raw vegetables, used in salads especially, are sometimes referred to as “rabbit food”.

Most of the signs of the classical Greek zodiac are animals. This fact relates to the etymology of the term “zodiac”, which comes from the Greek “zodiakos kyklos”, literally “circle of animals”.

Leif Erikson was a Norse explorer and was the first European to land in North America, some 500 years before Christopher Columbus’s landing in 1492. The Norsemen named the area they discovered “Vinland”, which might translate as “Wine Land” or “Pasture Land”. Erikson built a small settlement called Leifsbudir, which archaeologists believe they have found in modern day Newfoundland, at L’Anse aux Meadows. The settlement discovered in Newfoundland is definitely Norse, but there is some dispute over whether it is actually Erikson’s Leifsbudir.

“Pilaf” is a Persian word, and we use it to describe rice that is browned in oil and then cooked in a seasoned broth.

26. Home of the University of Maine : ORONO

“Lingo” is a specialized vocabulary, as in “journalese” and “legalese”, for example.

The Fleer Corporation was founded in 1885 and was the first company to successfully manufacture bubblegum (how I wish they hadn’t!).

Topps was a relaunch of an older company called American Leaf Tobacco, with the Topps name used from 1938. The earlier company was in trouble because it could not get supplies of its Turkish tobacco, so it moved into another chewy industry, making bubblegum. Nowadays, Topps is known for including (mainly) sports-themed trading cards in the packs of gum.

41. Made heckling remarks to : JEERED AT

Mexicali is a Mexican city in the state of Baja that lies on the US border, adjacent to Calexico, California. Mexicali is the most northerly city in Latin America.

The warthog is a wild animal from the pig family found in Sub-Saharan Africa. The animal takes its name from four wart-like protrusions on its head that serve as a means of defense, but are also reserves of fat.

Both the words “hale” and “healthy” derive from the the Old English “hal” meaning healthy.

25. Singer for the cops? : POLICE INFORMANT

46. Rank between viscount and marquis : EARL

26. Home of the University of Maine : ORONO

41. Made heckling remarks to : JEERED AT