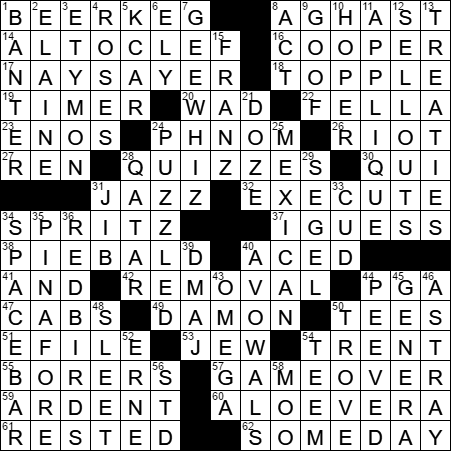 A cooper is a craftsman who makes wooden vessels, such as barrels.

E-file: that’s what I do with my tax return …

“Borer” is a name given to various species of insect that bore into the woody parts of plants.

“The Big Salad” is an episode of the sitcom “Seinfeld”. The episode is built around Elaine asking George to buy a “big salad to go” for her at Monk’s restaurant. George’s girlfriend is the one who actually hands the salad to Elaine, and Elaine thanks her … and not George. Hilarity ensues …

The “etymon” (plural “etyma”) is the word from which another word is derived. For example, the etymon of “Ireland” is “Eriu”, the old Celtic name for the island of Ireland.

Ely Cathedral is a famous and beautiful church in the city of Ely in the county of Cambridgeshire. There is a Gothic door on the north face of the cathedral that was designed by Sir Christopher Wren, the man famous as the architect of St. Paul’s Cathedral in London. Christopher Wren had a personal link to the church, as his uncle was the Bishop of Ely.

An “appliqué” is a small ornamental design that is applied to a surface. Appliqués are often applied to textiles, but also to other surfaces such as ceramics. “Appliqué” is French for “applied”.

As with WWII, tension was building as the European powers jockeyed for position on the world stage in the run-up to the First World War . The event that triggered the open warfare was the June 1914 assassination of Archduke Franz Ferdinand of Austria by a Yugoslav nationalist. There followed an ultimatum by the Austro-Hungarian Empire against the Kingdom of Serbia. This in turn triggered what were basically automatic threats invoked by age old alliances, and within weeks the major powers were at war. As these were colonial powers, the conflict spread around the world. By the time an armistice was signed in November 1918, the Austro-Hungarian Empire and the Ottoman Empire had ceased to exist, and the German and Russian Empires had been defeated.

Doha is the capital city of the state of Qatar located on the Persian Gulf. The name “Doha” translates from Arabic as “the big tree”.

The Franklin Mint was founded in 1964 by Joseph Segel, the same businessman who founded QVC.

A jib is a triangular sail that is set at the bow of a sailboat.

A spinnaker is sail that is used when a sailboat is sailing off the wind. It is a bulbous sail that balloons out when it fills with wind. Spinnakers might be said to resemble parachutes as they use similar light fabric, and both are often very colorful in design.

In early typewriters, the “space bar” was indeed a bar. It was a metal bar that stretched across the full width of the keyboard.

The sleeveless garment known as a pinafore is often worn as a protective apron. In days gone by, pinafores were “pinned” to the front (“fore”) of a dress, hence the name.

Beethoven wrote only one violin concerto, “Violin Concerto in D major” that he completed in 1806. The work was not a success during Beethoven’s lifetime, but has been a favorite since it was revived in 1844, with a performance by 12-year old Joseph Joachim in London, conducted by Felix Mendelssohn.

Homer was a famous poet of Ancient Greece, believed to be the author of the two classic epic poems, the “Iliad” and the “Odyssey”. However, some scholars believe that Homer did not actually exist, but rather he is the personification of oral tradition that was passed down through the ages.

Biological classification is a method used to group organisms by biological type. The method uses a hierarchy of nested classes, with an organism being classified with reference to evolutionary traits. The major taxonomic ranks used are:

A “cache” is a secret supply. We imported the term into English from French Canadian trappers in the 17th century. Back then, “cache” was a slang term for a “hiding place for stores”, derived from the French verb “cacher” meaning “to hide”.

60. It can help with the healing process : ALOE VERA