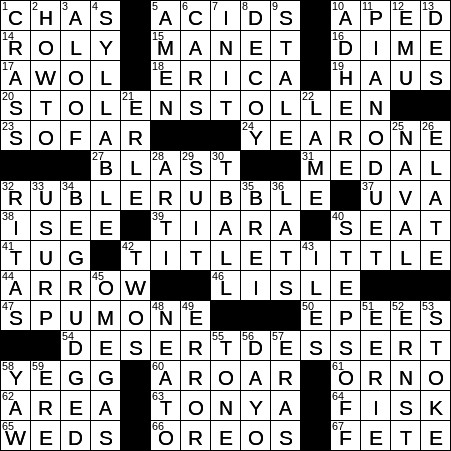 Today’s themed answers comprise two words. The second word is the same as the first, but with a consonant doubled:

The ruble (also “rouble”) is the unit of currency in Russia, as well as several other countries of the former Soviet Union. One ruble is divided into one hundred kopecks (also “kopeks”).

The University of Virginia (UVA) was founded by Thomas Jefferson, who sat on the original Board of Visitors alongside former US Presidents James Madison and James Monroe. In fact, the original UVA campus was built on land near Charlottesville that was once a farm belonging to President Monroe.

A “tittle” is a small diacritical mark used in writing, such as a cedilla or tilde used in some languages, or the dot over the lowercase letters i and j in English.

Lisle is a cotton fabric that has been through an extra process at the end of its manufacture that burns off lint and the ends of fibers leaving the fabric very smooth and with a clean edge.

Spumone (plural “spumoni”) is an Italian dessert, one made with a mixture of three ice cream flavors and containing candied fruit and nuts.

Biscuit Tortoni is an ice cream dessert made with eggs and heavy cream and usually enhanced with a couple of teaspoons of rum. “Tortoni” was apparently an 18th century owner of an Italian café in Paris.

“Yegg” is a slang word for a burglar and often for a safe-cracker. The origin of the term appears to be unknown.

The area of a rectangle is its length multiplied by its width.

Tonya Harding won the US Figure Skating Championships in 1991. Harding’s reputation was greatly tarnished in the run up to the 1994 Olympics, when her former husband and her bodyguard contracted someone to attack Harding’s main competitor, Nancy Kerrigan. During a practice session for the US Championship, a hired thug assaulted Kerrigan with police baton, attempting to break her leg. Kerrigan was forced to withdraw, and Harding won the championship. Both Harding and Kerrigan were selected for the Olympic team, and despite attempts to get Harding removed, both skated at the Games in Lillehammer. Harding finished in eighth place, and Kerrigan won the silver medal. Harding admitted that she helped cover up the attack when she found out about it, and was stripped of her US Championship title.

Carlton “Pudge” Fisk is a retired professional baseball player. Fisk played for both the Boston Red Sox and the Chicago White Sox.

There are two syllables in the word “seven”.

A pew is a bench in a church, usually with a high back. The original pews were raised and sometimes enclosed seats in the church used by women and important men or families. “Pew” comes from the Old French “puie” meaning “balcony, elevation”.

The Hôtel des Invalides is a building complex in Paris that was opened in the 1600s as a home and hospital for unwell and aged soldiers. Today, the complex includes several museums and monuments that relate to France’s military history. The magnificent former chapel known as the Dôme des Invalides houses several tombs, and is most notably the final resting place of Napoleon Bonaparte.

Rita Rudner is a very funny comedian from Miami, Florida. For over ten years now, Rudner has been performing almost exclusively in Las Vegas.

Matzah brei (translated as “fried matzah”) is a traditional Jewish dish made from matzo fried with eggs.

It does indeed take two to tango.

In French, the Mediterranean (la Méditerranée) is a sea (mer) containing “îles” (islands).

That would be a baseball field.

The singer and actor Harry Belafonte is of Caribbean descent, from Jamaica through his mother’s heritage, and from Martinique through his father. Born in New York City, Belafonte came to be known as the “King of Calypso”. His most famous recording is 1956’s “The Banana Boat Song”, and I suspect that his most famous movie performance is in Otto Preminger’s “Carmen Jones”.

The first US city to use gas streetlights was Baltimore, in 1816. The first private residence to be use gas illumination was in Philadelphia. The proliferation of gas lighting was largely driven by economics, as gaslight cost about 75$ less than oil lamps or candles. Gas lighting was also brighter and cleaner.

The word “yaw” means to deviate from the line of a course and is used mainly at sea. “Yaw” is derived from the Old Norse word “jaege” which means “to drive, chase”. As such, “yaw” is etymologically related to our word “yacht”.

27. Play at the highest volume, as a radio : BLAST

9. Opposite of fresh : STALE

40. Measures by pacing : STEPS OFF