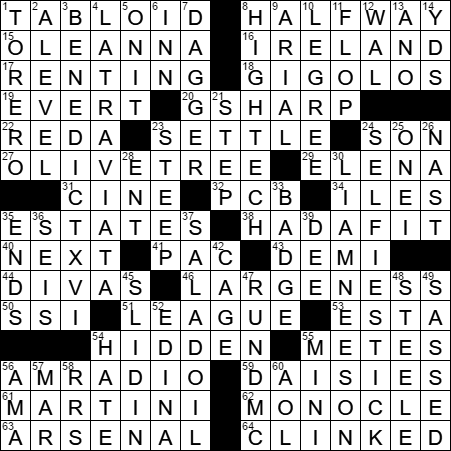 Tabloids are commonly read by those waiting in a grocery store checkout line.

I’ve never seen it, but “Oleanna” sounds like a powerful play to me. Written by David Mamet, it was first performed in 1992. It’s a two-person piece, the tale of a university professor and a female student who accuses him of sexual exploitation. Mimet got many of the themes of the play from the Clarence Thomas confirmation hearings in which Anita Hill accused the future Supreme Court justice of sexual harassment.

In French, a “gigole” is a “dancing girl, prostitute”. The male form of the word, “gigolo”, came into use in English in the 1920s.

Ben Stiller is the son of comic actors Jerry Stiller and Anne Meara. Ben is perhaps as well-known as a director as he is an actor. He made his debut as a director in the film “Reality Bites” in 1994.

Renée Fleming is a marvelous soprano from Indiana, Pennsylvania. Famous for her appearances in opera houses and concert halls all over the world, Fleming is also noted for her willingness to bring her craft to the masses. She was a guest on “Sesame Street”, singing “counting lyrics” to an aria from “Rigoletto”, and she has appeared a few times on Garrison Keillor’s “A Prairie Home Companion”.

Supplemental Security Income (SSI) is federal program that provides financial relief to persons with low incomes who are 65 or older, or who are blind or disabled. The SSI program is administered by the Social Security Administration (SSA) even though the the Social Security trust fund is not used for SSI payments. SSI payments come out of general tax revenue.

Why have a vodka martini shaken and not stirred (as does James Bond, 007)? Well, for one thing the shaken drink tends to be colder. And with more melted ice in the drink, it isn’t as strong. These are my personal observations … no need to write in …

“Toreador” is an old Spanish word for a bullfighter, but it’s a term not used any more in Spain nor in Latin America. In English we use the term “toreador”, but in Spanish a bullfighter is a “torero”. A female bullfighter in a “torera”.

The UK’s education system was reformed in the fifties with the introduction of the General Certificate of Education (GCE). There were two levels of certification that could be awarded in most subjects. The GCE Ordinary Level (O Level) was a much less rigorous standard of examination than the GCE Advanced Level (A Level). The O Levels have largely been replaced now, but students still sit A Level examinations.

Did you know that the former Pope, Benedict XVI, released a music CD while in office? His Holiness is featured singing on an album released by the Vatican called “Alma Mater: Featuring The Voice of Pope Benedict XVI Deluxe Edition”, a collection of sacred music. All proceeds go to help underprivileged children around the world. Benedict XVI was also the first pope to have a Twitter account. His first tweet went out on 12 December 2012:

Dear friends, I am pleased to get in touch with you through Twitter. Thank you for your generous response. I bless all of you from my heart.

Giuseppe Verdi’s opera “La Traviata” was originally titled “Violetta” after the main character in the piece. The title “La Traviata” translates into “The Woman Gone Astray”, reflecting Violetta’s life as a courtesan.

A dagger (also called an obelisk, plural obeli) is a typographical symbol. The dagger is usually used to indicate a footnote.

Selfie sticks, oh how I hate selfie sticks. A walk down the Strip in Vegas is an enlightening exercise in what’s wrong with contemporary photography …

The Thomas Nast Award has been presented annually since 1968 for the best cartoons on international affairs. There’s also a Thomas Nast Prize that has been awarded periodically since 1978 to one German cartoonist and one North American cartoonist. The celebrated cartoonist Thomas Nast was born in Landau, Germany and moved with his family to New York City when he was a child.

Irish actor Liam Neeson got his big break when he played Oskar Schindler in the Spielberg epic “Schindler’s List”. Neeson was in the news several years ago when he lost his wife, actress Natasha Richardson, in a tragic skiing accident in 2009.

In Spanish, when buying “cerveza” (beer), one might purchase a “paquete de seis” (six-pack).

Iceberg lettuce is the most popular lettuce consumed in the US. Also known as “crisphead”, it is considered by many experts to be one of least flavorful varieties of lettuce available. I agree …

There are two letters D (dees) in the word “Donald”.

Edina, Minnesota lies just southwest of Minneapolis. The town takes its name from Edinburgh, the capital city of Scotland. It was suggested by a Scottish mill owner at the time a new village was being set up in 1888.

58. Board game spots with nine sqs. between them : RRS

Moviefone is a movie listing service that is available by telephone in many parts of the country. Moviefone was launched in 1989, and purchased by AOL ten years later for $388 million.

58. Board game spots with nine sqs. between them : RRS