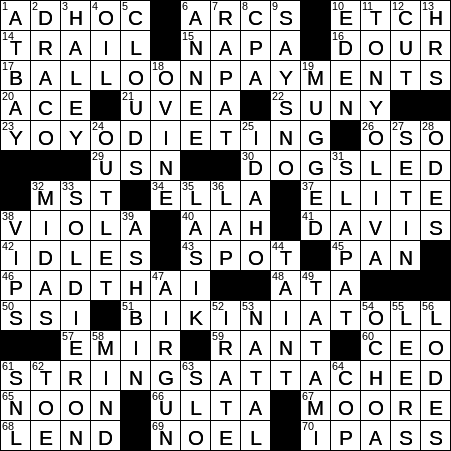 Today’s themed answer each start with an item that usually has STRINGS ATTACHED:

The State University of New York (SUNY) is the largest system of third-level colleges and universities in the world, with almost 500,00 students attending over 60 campuses across the state.

“Top Gun” is an entertaining action movie released in 1986 starring Tom Cruise and the lovely Kelly McGillis. The movie is all about pilots training at the US Navy’s Fighter Weapons School. A lot of footage was shot on board the Navy’s carrier the USS Enterprise during flight operations. At one point in a day’s shooting, the commander of the Enterprise changed course as needed for normal operations, but this altered the light for the cameras that were filming at the time. Director Tony Scott asked for the course to be changed back, but was informed that a course change would cost the Navy $25,000. Scott wrote out a check there and then, and he got another five minutes of filming with the light he needed.

The Iditarod Trail Sled Dog Race covers a massive 1,161 miles, from Anchorage to Nome in Alaska. The race starts every year on the first Saturday in March, with the first race having been held in 1973. The fastest finishing time was set in 2002 at just under 9 days. The first few races only used a northern route, but then a southern route was added to the roster every second year. It’s kind of a good thing, because when the racers take the northern route they don’t even pass through the town of Iditarod!

The “crème de la crème” is the elite, the best of the best. The term is French and translates as “cream of the cream”.

Actress Viola Davis is probably best known on the small screen for playing the lead in the drama “How to Get Away with Murder”. On the big screen, I’d say that her most famous role is the starring role in the 2011 film “The Help”.

People at the gym who are doing weight training will often “spot” for each other. This means that the person who is spotting assists in the lift, allowing the “lifter” to work with more weight than usual.

The delicious dish called Pad Thai is a meld of stir-fried rice noodles with tamarind juice, red chili pepper plus a mix of vegetables and possibly tofu, meat or fish. It is usually topped with crushed peanuts, coriander and lime. The name “Pad Thai” translates as “fried Thai-style”.

Supplemental Security Income (SSI) is federal program that provides financial relief to persons with low incomes who are 65 or older, or who are blind or disabled. The SSI program is administered by the Social Security Administration (SSA) even though the the Social Security trust fund is not used for SSI payments. SSI payments come out of general tax revenue.

The testing of US nuclear weapons by the US at Bikini Atoll in the middle of 1946 went by the codename “Operation Crossroads”. The tests used A-bombs and were designed to measure the effect of blasts on navy vessels. There were three tests planned, but the third had to be cancelled as the Navy couldn’t decontaminate the ships used in the second test.

An emir is a prince or chieftain, most notably in the Middle East. In English, emir can also be written as emeer, amir and ameer (watch out for those spellings in crosswords!).

Mary Barra is the chief executive officer of General Motors (GM). Barra is the first woman to hold the top position in a global automotive manufacturing company.

Our word “noon”, meaning “midday”, comes from the Latin “nona hora” that translates as “ninth hour”. Back in Ancient Rome, the “ninth hour” was three in the afternoon. Over the centuries, traditions such as church prayers and “midday” meals shifted from 3 p.m. to 12 p.m., and so “noon” became understood as 12 noon.

Demi Moore was born Demetria Guynes and took the name Demi Moore when she married her first husband, Freddy Moore. Moore’s second husband was Bruce Willis. She changed her name to Demi Guynes Kutcher a few years after marrying her third husband, Ashton Kutcher. But, Kutcher and Moore split in 2013.

“Noël” is the French word for the Christmas season, ultimately coming from the Latin word for “birth” (natalis). Noel has come to be used as an alternative name for a Christmas carol.

Constitutional law was brought to Athens and Ancient Greece by a legislator called Draco. The legal code that Draco developed was relatively harsh, which is why we use the term “draconian” to describe unforgiving rules.

11. Twins legend who was the first DH to hit a home run : TONY OLIVA

Tony Oliva is a former Major League Baseball (MLB) player who played his whole career for the Minnesota Twins. Oliva suffered from severe knee problems due to multiple injuries, forcing him to play the last four years of his career as a designated hitter (DH). On the bright side, he went into the history books in 1973 when became the first DH to hit a MLB home run.

The verb “to mug” means to make an exaggerated facial expression. The term comes from mugs used to drink beer (called Toby mugs) that are the made in the shape of heads with grotesque expressions. “Mug” can also be a noun meaning “face”.

That would be juice (electricity) provided by a power outlet.

25. Home of most of Sawtooth National Forest : IDAHO

Sawtooth National Forest is located almost completely in Idaho, with a $% of its area spilling over into Utah. Named for the Sawtooth Mountains that cross it, the area was set aside for the nation in a proclamation signed by President Teddy Roosevelt in 1905.

Mosquito is the Spanish for “little fly”. The female mosquito actually has to have a “blood meal” before she is able to lay her eggs.

32. King who turned his daughter into gold : MIDAS

Our word “natal” comes from the Latin “natalis” meaning “pertaining to birth”.

Lorena Ochoa is a retired professional golfer from Mexico who was ranked as the number one female golfer in the world from 2007 to 2010.

“Weekend Update” is the longest-running of any recurring sketch on “Saturday Night Live”. In fact, the segment made its debut on the very first show, back in 1975. The first “anchor” at the “Weekend Update” was Chevy Chase.

61. Proposal conditions … and what the first parts of the answers to starred clues all can have : STRINGS ATTACHED

11. Twins legend who was the first DH to hit a home run : TONY OLIVA

25. Home of most of Sawtooth National Forest : IDAHO

32. King who turned his daughter into gold : MIDAS