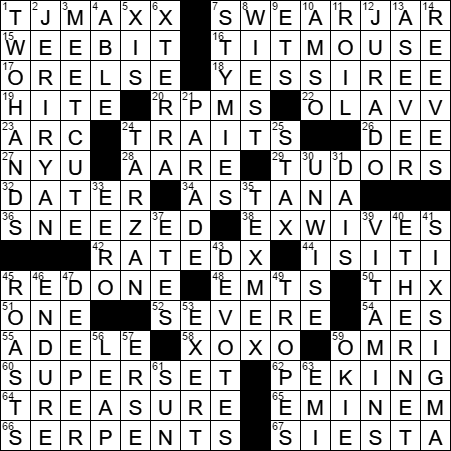 TJ Maxx is a chain of department stores in the US, with outlets in Europe as well. Over in the UK however, the stores are known as TK Maxx.

The birds known as chickadees or titmice in North America, are usually called simply “tits” in the rest of the English-speaking world.

Shere Hite is a German sex educator, although she was born in the US. Hite’s work focuses on sexual experience and what meaning it holds for an individual.

Olav V was King of Norway from 1903 until 1991. Tremendously popular and down-to-earth, Olav V was known as “the People’s King” (“Folkekongen” in Norwegian). He was also a grandchild of Edward VII, the British king.

A story arc is a continuing storyline in say a television show that has a number of episodes. Story arcs are also found in comics, books, video games, and other forms of media.

The opening letter in the word “door” is a letter D (dee).

New York University (NYU) is comprised of fifteen schools, one of which it the Tisch School of the Arts. The Tisch is famous for its acting program, with notable alumni such as Debra Messing, Christopher Guest and Josh Radnor.

Director Oliver Stone attended the Tisch School of the Arts at New York University after he returned from Vietnam. Stone’s instructor in Sight and Sound was Martin Scorsese.

The Wars of the Roses was a series of civil wars fought for the throne of England between the rival Houses of Lancaster and York. Ultimately the Lancastrians emerged victorious after Henry Tudor defeated King Richard III at the Battle of Bosworth Field. Henry was crowned King Henry VII, and so began the Tudor dynasty. Henry Tudor united the rival houses by marrying his cousin Elizabeth of York. Henry VII had a relatively long reign of 23 years that lasted until his death, after which his son succeeded to the throne as Henry VIII, continuing the relatively short-lived Tudor dynasty. Henry VIII ruled from 1509 until his death in 1547. Henry VIII was the last male to lead the the House of Tudor, as his daughter Queen Elizabeth I died without issue. When Elizabeth died, the Scottish King James VI succeeded to the throne as James I of England and Ireland. James I was the first English monarch of the House of Stuart.

Astana is the capital of Kazakhstan, although only since 1997. Prior to 1997, the nation’s capital was Almaty. The decision to move the capital was made as Almaty is in a part of the country populated by ethnic Russians and the new government wanted to distance itself even further from its Soviet history.

The actor Mickey Rooney first appeared on stage in vaudeville, at the age of six. He was still performing regularly when in his nineties, before passing away at 93 years of age in 2014. Rooney made millions of dollars over his long career, but lost it all. He passed away with assets amounting to merely $18,000.

That would be the Roman numeral I.

Adlai Stevenson (AES) ran for president unsuccessfully against Dwight D. Eisenhower (DDE) in 1952 and in 1956. Some years after his second defeat, Stevenson served under President Kennedy (JFK) as Ambassador to the United Nations. Stevenson was always noted for his eloquence and he had a famous exchange in a UN Security Council meeting during the Cuban missile crisis. Stevenson bluntly demanded that the Soviet representative on the council tell the world if the USSR was installing nuclear weapons in Cuba. His words were “Don’t wait for the translation, answer ‘yes’ or ‘no’!” followed by “I am prepared to wait for my answer until Hell freezes over!”

Omri was the sixth king of Israel, and was succeeded by his son Ahab.

The Boxer Rebellion took place in China between 1899 and 1901. It was a violent uprising by nationalists targeting foreigners and Chinese Christians. Leaders of the revolt were the “Yihequan”, known in English as “The Righteous and Harmonious Fists” or “Boxers United in Righteousness” (or simply “Boxers”). The Boxers were typically well-trained, athletic young men who practiced martial arts, hence the moniker. The rebellion was quelled by an international coalition referred to as the Eight Nation Alliance”, comprising military forces from Japan, Russia, Britain, France, the US, Germany, Italy and Austria-Hungary.

The Shady Records label was founded by rapper Eminem and his manager in 1999. The label’s name comes from Eminem’s album “The Slim Shady LP” released earlier that year.

Jeri Ryan’s most famous role is that of the de-assimilated Borg known as Seven of Nine, on “Star Trek: Voyager”. I haven’t seen that show, so I know Ryan from a supporting role on the legal drama “Shark”, playing opposite James Woods. She also plays Ronnie Cooke on “Boston Public”.

The word “stymie” comes from golf, and is a situation in which one’s approach to the hole is blocked by an opponent’s ball.

Dianne Wiest is an actress from Kansas City, Missouri. Wiest has won two Best Supporting Actress Academy Awards, for “Hannah and Her Sisters” in 1987 and for “Bullets over Broadway” in 1995. In both movies, she was directed by Woody Allen.

Katy Jurado was an actress from Guadalajara, Mexico who made several appearances in Hollywood westerns in the fifties and sixties. Jurado became the first Latin American actress to win a Golden Globe, doing so for her performance in 1952’s hit movie “High Noon”. Her second husband was fellow actor Ernest Borgnine.

The actor George Reeves played Superman (aka Clark Kent) on the fifties TV show “Adventures of Superman”. Reeves died from a gunshot wound in the head in 1959. Officially, the death was recorded as suicide, despite a lot of conflicting evidence. The lack of fingerprints on the gun, and lack of gunpowder residue on Reeves’ hands, led to a lot of speculation that the actor might have been murdered.

Stax is a brand of potato snack made by Lay’s. Stax are similar to its famous competitor, Pringles.

Pringles snack chips were introduced in 1967 by Procter & Gamble and were first sold as “Pringles Newfangled Potato Chips”.

Ultimately our word “dais”, meaning “raised platform for a speaker”, comes from the Latin “discus” meaning a “disk-shaped object”.

“Nos étés” (“Our Summers” in English) is a French-Canadian TV series that originally aired from 2005 until 2008. The story follows the lives of two interconnected families over the course of the twentieth century. One family comprises wealthy merchants from Montreal, the other modest famers from a village on the Saint Lawrence River.

General Mills produces a range of breakfast cereals using the “Total” name. The marketing message for the brand is that one serving provides the total daily allowance of several vitamins and minerals.

40. One way to connect nowadays : ETHERNET

Ethernet is the name given to a standardized configuration of local area networks (LANs). An ethernet cable is that one that has a connector on the end that looks like a regular telephone connector, but is about twice as wide. Ethernet dates back to the mid seventies, when it was developed by the Xerox Corporation.

Six Sigma is a quality control process that was introduced by Motorola in 1986. The process uses statistical methods to determine when a manufacturing process has strayed from the norm, requiring it to be halted so that the necessary corrections can be made.

Lake Superior is the largest of the Great Lakes, and the largest freshwater lake in the world by area. The lake was referred to by the first French explorers as “le lac supérieur”, which translates literally as “the upper lake”. The British anglicized the name to “Lake Superior”.

A “trope” is a figure of speech, from the Greek word “tropos” that has the same meaning.

Tartan is sometimes called “plaid” over here in the US, a word not used in the same sense outside of this country. In Scotland a “plaid” is a blanket or a tartan cloth slung over the shoulder.

“Okies” was a derogatory term used during the Dust Bowl of the 1930s for farming families who migrated from Oklahoma (hence the name), Arkansas, Kansas and Texas in search of agricultural jobs in California. The road used by many of these migrant families was Route 66, which is also called “Mother Road”.

Tom Joad is the protagonist the John Steinbeck’s novel “The Grapes of Wrath”. The role of Joad was played by Henry Fonda in the 1940 film adaptation directed by John Ford. Ford’s movie has a place in history, as it was one of the first 25 movies selected for preservation in the US National Film Registry by the Library of Congress.

A “solar flare” is a sudden energy release from the surface of the Sun that can be perceived as a flash of brightness and an eruption of magnetic energy. That magnetic energy reaches the Earth about two days after the event, and can disrupt long-range radio communications on our planet. The location of solar flares has been strongly linked to sunspot groups, groups of dark spots on the Sun’s surface.

The Big Four recording labels were (until EMI was broken up in 2012 and absorbed by what became “the Big Three”):

17. Unspecific threat : OR ELSE

40. One way to connect nowadays : ETHERNET