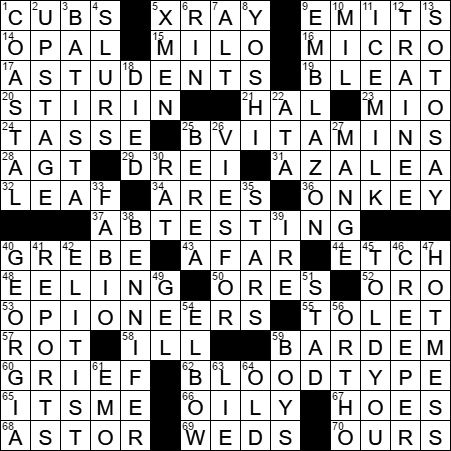 Each of today’s themed answers starts with a BLOOD TYPE:

“Dios mio!” translates from Spanish as “My God!”

The B-vitamins were originally thought to be just one vitamin, which was labeled vitamin B. It was then discovered vitamin B was in fact made up of eight distinct vitamins, which today are given distinct numbers (B1, B6, B12 etc). Supplements often contain a mixture of all eight, a combination known as vitamin B complex.

Thiamine is also known as vitamin B1. A deficiency of thiamine causes the disease known as beriberi, which is a disorder of the nervous system.

Riboflavin is vitamin B2. At one time, riboflavin was known as vitamin G.

A grebe is a small to medium-sized freshwater diving bird. Although they appear to be very different, recent molecular studies have shown that grebes and flamingos are closely related.

Spanish actor Javier Bardem is probably best known for playing the crazed assassin in 2007’s “No Country for Old Men”, and Bond villain Raoul Silva in 2012’ “Skyfall”. Bardem won the Best Supporting Actor for his performance in “No Country for Old Men”, making him the first Spaniard to win an Academy Award. Bardem wasn’t actually born on the Spanish mainland, but rather in Las Palmas in the Canary Island off the Moroccan coast. He is married fellow-actor Penélope Cruz in 2010.

Fidel Castro studied law at the University of Havana and there became a follower of left-wing ideals. He launched his first rebellion against Cuban president Fulgencio Batista in 1953, which landed him in jail for a year. He later led rebels in a guerrilla war against the Cuban government, which led to the Cuban Revolution and the overthrow of Batista in 1959. Castro took control of the country, and immediately formed a strong relationship with the Soviet Union. Concern over the alliance in the US led to the botched Bay of Pigs Invasion of 1961. There followed the Cuban Missile Crisis in 1962. Fidel Castro started to transfer power to his brother Raúl in 2008, and has led a life of increasing retirement ever since.

Yoshi is a dinosaur-like character in some Nintendo video games. Yoshi first appeared as a sidekick for Mario and Luigi in the 1991 game called “Super Mario World”.

Our terms “blazon” and “emblazon” both mean to decorate in a showy way. “To blazon” can also mean to adorn with a coat of arms. In the world of heraldry, a “blazon” is in fact a coat of arms, probably coming from the old French word “blason” meaning “shield”.

The .mil domain was one of the six original generic top-level domains specified. The complete original list is:

Berea College is located in Berea, Kentucky, just south of Lexington. It is a remarkable university that is focused on providing a low-cost education to students from low-income families. There are no tuition fees and instead students must work at least ten hours a week on campus and in service jobs. Berea was also the first college in the Southern US to become coeducational and the first to become racially integrated.

“The Fault in Our Stars” is a 2014 film based on a novel of the same by John Green. Both film and novel are about two teenage cancer patients who fall in love with each other. The leads are played by Shailene Woodley and Ansel Elgort.

“Bennifer” is a portmanteau used for the super-couple pairing of actors Ben Affleck and Jennifer Lopez. Other supercouples are/were:

Ortho is a brand of weed killer owned by Scotts Miracle-Gro.

2. Steal the spotlight from : UPSTAGE