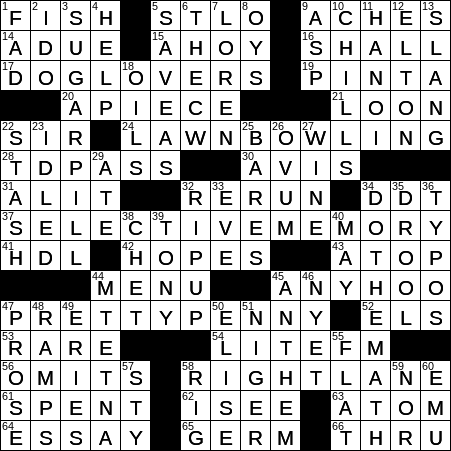 Today’s themed answers each comprise two words. The word on the RIGHT in the grid is a type of LANE:

When in their teens, Paul McCartney and John Lennon would often head into the center of Liverpool together on the bus. The convenient place for them to meet was at the end of Penny Lane. Years later, Paul McCartney wrote the song “Penny Lane”, which was a big hit in 1967. “Penny Lane” was released as a double A-side record with “Strawberry Fields Forever” penned by John Lennon. Coincidentally, Strawberry Field was also a real location, not far from Penny Lane in Liverpool. Strawberry Field was a Salvation Army Children’s Home in the garden of which Lennon would play as a child. I don’t think Lennon and McCartney ever really forgot their roots …

WLTW, 106.7 Lite FM, is a New York City radio station that broadcasts using a transmitter that sits at the top of the Empire State Building. Lite FM specializes in playing popular music from the 1980s to today, but avoiding rap, hard rock and country music that has crossed over to the pop genre. The “Lite FM” name was adopted in 1984 when the station began broadcasting what is often referred to as “elevator music”. The playlist has evolved a lot since then.

The English philosopher and statesman Francis Bacon wrote a celebrated and respected collection of essays called “The Essayes”, first published in 1597. My favorite of these essays is “Of Simulation and Dissimulation”, which observes

The disinfectant called Lysol takes its name from the words “lysosome” and “solvent”. Lysosomes are structures found within cells that have the job of breaking up waste material and cellular debris.

A “placebo” is a medical treatment that is ineffective, but that is deliberated formulated to deceive the patient into thinking it is real. Placebos can be given as control treatments in trials, and so the level of deception can be relatively low, as the patients are aware of the possibility of being given an ineffective treatment. The term “placebo” is the Latin word for “I shall please”. The idea is that the treatment is given more to please than to benefit the patient.

The WB Television Network was launched in 1995 as a joint venture between Warner Bros. Entertainment and Tribune Broadcasting. The WB (for “Warner Bros.”) was shut down in 2006 and replaced by the CW (for “CBS” and “Warner Bros.”).

“Supernatural” is a fantasy horror TV show on the CW channel that was first broadcast in 2005. I don’t do horror …

The 1971 Elton John song “Tiny Dancer” was written by John himself, with lyrics by Bernie Taupin. Apparently the “tiny dancer” in the song is a character reminiscent of the young ladies that Taupin met in California in 1970.

Chet Huntley was a newscaster who co-anchored “The Huntley-Brinkley Report” on NBC with David Brinkley from 1956 to 1970.

Mt. Etna is the largest of three active volcanoes in Italy. Etna is about 2 1/2 times the height of its equally famous sister, Mt. Vesuvius. Mt. Etna is home to a 110-km long narrow-gauge railway, and two ski resorts.

Vladivostok is a Russian city in the very southeast of the country, located close to the borders with China and North korea. It is a port city, and is home to the Russian Pacific Fleet. Indeed, Vladivostok is the largest Russian port on the Pacific Ocean.

The Erie people lived on lands south of Lake Erie. The Erie were sometimes referred to as the Cat Nation, a reference to the mountain lions that were ever-present in the area that they lived. The name “Erie” is a shortened form of “Erielhonan” meaning “long tail”, possibly a further reference to the mountain lion or cat, which was possibly used as a totem. The Erie people gave their name to the Great Lake.

“Fur Elise” is a beautiful piece of music written by Beethoven, and is also known as “Bagatelle in A Minor”. “Fur Elise” means simply “For Elise”, but sadly no one knows for sure the identity of the mysterious dedicatee.

“Flat” is a word more commonly used in the British Isles than here, in the sense of an apartment or condominium. The word “flat” is Scottish in origin, in which language it meant a “floor in a house”.

24. Sport involving some rolling on the grass : LAWN BOWLING (from “bowling lane”)

5. File-renaming command at times : SAVE AS