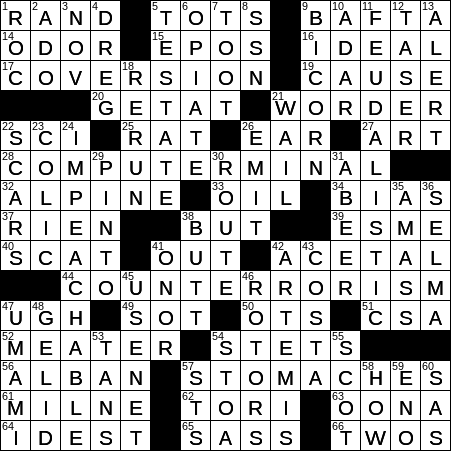 Each of today’s themed answers has been COMPRESSED. The end letters in the first word have been allowed to overlap the identical starting letters in the second word:

The BAFTA awards are presented annually by the British Academy of Film and Television Arts (BAFTA). The BAFTAs are the UK equivalent of the US’s Oscar and Emmy awards, all rolled into one.

“Epos” is the Greek word for a story or a poem. We have absorbed it into English as “epic”, a long narrative poetic work describing heroic deeds and ventures.

“Blue Suede Shoes” was written and first recorded by Carl Perkins, in 1955. The idea for the song was given to him by Johnny Cash. Cash had been serving with the military in Germany and there met an airman who referred to his military regulation air shoes as “blue suede shoes”. The idea was reinforced when Perkins heard a young man who was dancing say to his partner, “Don’t step on my suede shoes”. Perkins version of the song was very, very successful, actually “going gold” in sales. Elvis Presley’s 1956 cover version did even better.

Art is a jealous mistress, and if a man have a genius for painting, poetry, music, architecture or philosophy, he makes a bad husband and an ill provider, and should be wise in season and not fetter himself with duties which will embitter his days and spoil him for his proper work.

J. D. Salinger wrote a short story called “For Esmé – with Love and Squalor”, originally published in “The New Yorker” in 1950. It is a story about a young English girl called Esme and an American soldier, and is set in WWII.

Acetals are a class of organic compounds, the smaller of which are volatile solvents. The simplest of the group is named simply “acetal”, and is a solvent and ingredient used in cosmetics. A much larger example of an acetal is cellulose.

The stuffed toy known as a teddy bear was introduced in the early 1900s and was name after President Theodore “Teddy” Roosevelt. The toy was inspired by a political cartoon that was drawn in 1902 showing President Roosevelt on a bear hunt and refusing to kill black bear cub.

Oona O’Neill dated J. D. Salinger and Orson Welles in her teens, but ended up marrying Charlie Chaplin. Oona was still quite young when she married Chaplin, much to the dismay of her famous father, playwright Eugene O’Neill. Eugene went as far as disowning 18-year-old Oona because of the marriage to 54-year-old Chaplin.

The mythical roc is a huge bird of prey, reputedly able to carry off and eat elephants. The roc was said to come from the Indian subcontinent. The supposed existence of the roc was promulgated by Marco Polo in the accounts that he published of his travels through Asia.

Scorpio is a the eighth astrological sign of the Zodiac.

Someone who dies “intestate” does so without having made a will. Someone with a will is “testate”.

Opiates are the narcotic alkaloids found in the opium poppy plant, although some synthetic versions and derivatives of the same alkaloids are also called opiates. To produce opiates, the latex sap of the opium poppy is collected and processed. The naturally-occurring drugs of morphine and codeine can both be extracted from the sap. Some synthesis is required to make derivative drugs like heroin and oxycodone.

Something described as bicorn is crescent-shaped, or two-horned. The term comes from the Latin “cornu” meaning “horn”.

When the incredibly successful sitcom “Friends” was in development it was given the working title “Insomnia Cafe”. This was changed to “Friends Like Us”, before final going to air as “Friends”.

Baby colic is a condition in which a baby cries for no apparent reason for extended periods. At least one study has shown that breastfed babies are about half as likely to suffer from colic.

Treason is a serious crime committed against the nation (or the sovereign). One who commits “treason” is called a “traitor”. In the past, the term treason also applied to lesser crimes (like a woman killing her husband) so there was a differentiation between high treason against the king, and “petit treason”, against a more common citizen.

A “pinto” is a horse with patchy markings of white mixed with another color. “Pinto” means “painted” in American Spanish.

The Bloody Sunday march took place between Selma and Montgomery, Alabama on 7 March 1965. The 600 marchers involved were protesting the intimidation of African-Americans registering to vote. When the marchers reached Dallas County, Alabama they encountered a line of state troopers reinforced by white males who had been deputized that morning to help keep the peace. Violence broke out with 17 marchers ending up in hospital, one nearly dying. Because the disturbance was widely covered by television cameras, the civil rights movement picked up a lot of support that day.

To be the butt of the joke is to be the jokester’s target. Indeed, back in the 1600’s, a “butt” was a target used in archery practice.

Artemis was an ancient Greek goddess, the equivalent of the Roman goddess Diana. Artemis was a daughter of Zeus and Leto, and the twin sister of Apollo.

Remember the good old days, when you read messages online in “newsgroups”? Well, that system of aggregating public messages is known as Usenet, and it’s still around today. Usenet started operating in 1980, some ten years before the World Wide Web was introduced (which system has displaced Usenet in terms of popularity). Usenet definitely played a significant part in the history of the Internet. For instance, the terms “FAQ” and “spam” were both born on Usenet.

“Chopper” is an informal term used for a helicopter.

“Gelid” is such a lovely word, with the meaning “icy cold”. “Gelid” derives from the Latin “gelum” meaning “frost, intense cold”.

Cleon and Pericles were both statesmen in Ancient Greece, specifically in the city-state of Athens. Pericles and Cleon were political opponents, with Pericles falling foul to the maneuvers of Cleon, and eventually dying of the plague.

The Confederate States of America (CSA) set up government in 1861 just before Abraham Lincoln took office. Jefferson Davis was selected as President of the CSA at its formation, and retained the post for the life of the government. The original seven secessionist slave states were South Carolina, Mississippi, Florida, Alabama, Georgia, Louisiana, and Texas. Virginia, Arkansas, Tennessee and North Carolina seceded soon after the start of the Civil War, with Missouri and Kentucky later joining the confederacy.

Brian Eno was one of the pioneers of the “ambient” genre of music. Eno composed an album in 1978 called “Ambient 1: Music for Airports”, the first in a series of four albums with an ambient theme. Eno named the tracks somewhat inventively: 1/1, 2/1, 2/1 and 2/2.