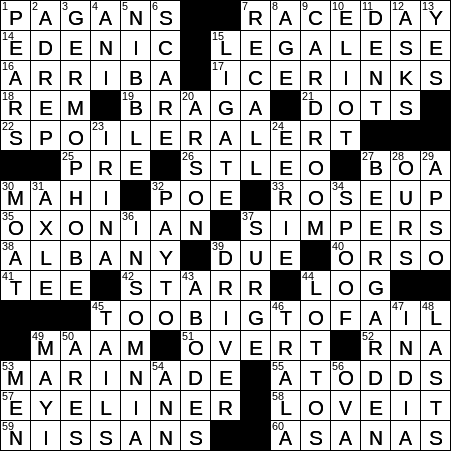 A pagan is someone who holds religious beliefs that are different from the main religions of the world. In classical Latin “paganus” was a villager, a rustic.

The first Kentucky Derby took place in 1875, and is a race modelled on the Epsom Derby in England and the Grand Prix de Paris (now called the “Prix de l‘Arc de Triomphe”). As such, the Kentucky Derby was run over 1½ miles, although in 1896 this was shortened to 1¼ miles. The winning horse is presented with a very elaborate blanket made of red roses, and so the Derby is nicknamed “Run for the Roses”. The race is held on the first Saturday in May each year, and is limited to 3-year-old horses.

The New Jersey Devils are the professional ice hockey team based in Newark. The club was founded in 1974 in Kansas City, originally as the Mohawks, and then quickly renamed the Scouts. The franchise moved to Denver in 1976, becoming the Colorado Rockies. The move to Newark happened in 1982, when the team was renamed the New Jersey Devils.

R.E.M. was a rock band from Athens, Georgia formed in 1980. The name “R.E.M.” was chosen randomly from a dictionary, apparently.

The REM song “Losing My Religion” was released in 1991. The title is a phrase used in the southern US with the meaning “losing my temper, civility”.

Sonia Braga achieved fame in her native Brazil playing the title role in the movie “Gabriela”. There followed roles in American films such as “Kiss of the Spider Woman” and “The Milagro Beanfield War”. She has also played in the Portuguese version of “Desperate Housewives”.

“Rotten Tomatoes” is a website that mainly provides reviews and ratings of movies, although it now covers TV shows as well. The site was launched in 1998 and takes its name from the practice of audience members throwing rotten tomatoes at a unappreciated performer on stage.

The Muppet called Miss Piggy has a pretentious air, and so refers to herself as “moi”. In 1998, Miss Piggy even released her own perfume called “Moi”.

Mahi-mahi is the Hawaiian name for the dolphin-fish, also called a dorado. The mahi-mahi is an ugly looking creature if ever I saw one …

“The Fall of the House of Usher” is perhaps the most famous short story by Edgar Allan Poe, first published in 1839. The story is a Gothic tale, an interview with Robert Usher in his house which literally “falls”, breaks into two and is swallowed up by a lake. Some believe that the story was inspired by events at a real Usher House that once stood on Boston’s Lewis Wharf. When the Usher House was torn down, the bodies of a man and woman were found embracing in a cavity in the cellar, a fact reflected in the story as Robert Usher’s sister is supposedly buried alive in the crypt.

Tony Blair was Prime Minister of the United Kingdom for ten years, from 1997 to 2007. Blair led his Labour Party from the left towards the center, helped along by the phrase “New Labour”. Under his leadership, Labour won a landslide victory in 1997, and was comfortably elected into power again in 2001 and 2005. Blair stepped down in 2007 and Gordon Blair took over as prime minister. Labour was soundly defeated at the polls in the next general election, in 2010.

Ringo Starr’s 1971 song “It Don’t Come Easy” was his first release following the breakup of the Beatles. Although Starr is credited as the sole songwriter, Starr has acknowledged that he wrote it with fellow Beatle George Harrison.

“Dixie” is a nickname sometimes used for the American South, and often specifically for the original 11 states that seceded from the Union just prior to the Civil War. It’s apparently not certain how the name “Dixie” came about. One theory is that it comes from the term “dixie” which was used for currency issued by banks in Louisiana. The 10-dollar bills had the word “dix” on the reverse side, the French for “ten”. From the banknote, the French speaking area around New Orleans came to be known as Dixieland, and from there “Dixie” came to apply to the South in general.

Our verb “to marinate” comes from the French “mariner” meaning “to pickle in sea brine”, which in turn comes from the Latin “marinus” meaning “of the sea”. So, “marinade” is related to “marine”.

Eyeliner has been used for a long time. There is evidence that the Ancient Egyptians and Mesopotamians used a dark black line around the eyes to protect the skin from the sun as early as 10,000 BCE.

The Leaf is an electric car made by Nissan that was introduced in 2010. The model name is an acronym standing for “leading environmentally-friendly affordable car”.

Stud poker is the name given to many variants of poker, all characterized by the dealer giving each player a mix of cards face-down and face-up. The cards facing upwards are called “upcards”. The cards facing downwards are called “hole cards”, cards only visible to the individual who holds that particular hand. This gives rise to the phrase “ace in the hole”, a valuable holding that only the player with the ace is aware of.

“The Lovesong of J. Alfred Prufrock” is a very famous poem by T. S. Eliot, first published in 1915. The rather odd name of “Prufrock” seems to have just come to Eliot, although there was a Prufrock-Littau Company in St. Louis while he lived there.

In the context of surgery, a ligature is a suture tied around an anatomical structure, usually a blood vessel. The term “ligature” comes from the Latin “ligare” meaning “to bind”.

Olga, Masha and Irina were the “Three Sisters” in the play by Anton Chekhov. The three title characters were inspired by the three Brontë sisters, the English authors.

People with insomnia might count sheep as an aid to falling asleep.

44. Powerball and others : LOTTOS

The two sides of a coin are known as the “obverse” and the “reverse”. The obverse is commonly referred to as “heads”, as it often depicts someone’s head. The reverse is commonly called “tails”, as it is the opposite of “heads”.

The brilliant film “Slumdog Millionaire” is a screen adaptation of a 2005 novel by Indian author Vikas Swarup. This low-budget movie won eight Oscars in 2008. I reckon it turned a profit …

50. Father of Phobos and Deimos : ARES

A “varlet” was an attendant or servant, perhaps a knight’s page. The term comes from the Old French “vaslet”, which also gave us our contemporary word “valet”.

Cape Ann is 30 miles north of Boston and is on the northernmost edge of Massachusetts Bay. The Cape was first mapped by the explorer John Smith. Early in his adventurous life Smith had been captured and enslaved by the Ottoman Empire. His “owner” in his days of slavery was a woman called Tragabigzanda, and apparently the slave and owner fell in love. Smith originally called Cape Tragabigzanda in her memory, but King Charles I changed the name to Cape Ann in honor of his own mother, Anne of Denmark.

Rockport is a town in Massachusetts located at the very tip of Cape Ann, about 40 miles northeast of Boston. Given its location, the town is surrounded on three sides by the Atlantic Ocean.

3. One who shuns shaking : GERMOPHOBE

44. Powerball and others : LOTTOS

50. Father of Phobos and Deimos : ARES