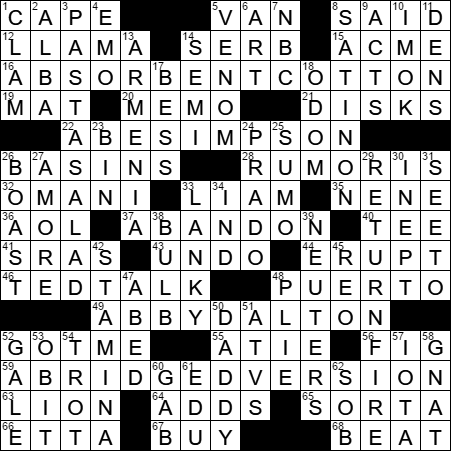 Theme: Ab and On

The Volkswagen Routan is a seven-seat minivan that is a variant of the Dodge Grand Caravan and Chrysler Town & Country. All three brands have been manufactured alongside each other at Chrysler Canada’s Windsor assembly plant.

The acronym TED stands for Technology Entertainment and Design. TED is a set of conferences held around the world by a non-profit group called the Sapling Foundation. The conference subjects are varied, and the meetings are often led by big names such as Bill Clinton, Al Gore, Bill Gates and Jane Goodall. The Sapling Foundation then makes recordings of the conferences available for free online with the intent of disseminating the ideas globally. These conferences are known as “TED Talks”.

Puerto Rico is located in the northeastern Caribbean (in the Atlantic Ocean), east of the Dominican Republic. The name “Puerto Rico” is Spanish for “rich port”. The locals often call their island Borinquen, the Spanish form of “Boriken”, the original name used by the natives.

Actress Abby Dalton played nurse Martha Hale on “Hennesey” and Joey Bishop’s wife on “The Joey Bishop Show”, two sitcoms from the fifties and sixties. More recently, she played Julia Cumson on the primetime soap “Falcon Crest” in the eighties.

Actress Jessica Alba got her big break when she was cast in the Fox science fiction show “Dark Angel”. Alba had a tough life growing up as she spent a lot of time in hospital and so found it difficult to develop friendships. As a youngster she twice had a collapsed lung, frequently caught pneumonia, suffered from asthma, had a ruptured appendix and a tonsillar cyst. On top of all that she acknowledges that she suffered from obsessive-compulsive disorder as a child. It seems that she has really turned her life around …

“Good Luck Chuck” is a 2007 romantic comedy film that wasn’t received well by the critics at all. Stars of the movie are Dane Cook (Chuck) and Jessica Alba. Chuck is a man who has a curse placed on him, so that every woman he sleeps with breaks up with him and marries the next man who asks her out.

There are about 1750 different species of scorpion in the world, but only 25 or so have venom sufficiently toxic to kill a human.

Armenia is a landlocked country found east of Turkey, and a former Soviet Republic. Back in the year 301 CE, the ancient Kingdom of Armenia became the first nation in the world to adopt Christianity as its national religion.

Lamar Odom is a basketball forward in NBA. Apparently Odom loves candy, and that’s how he earned his nickname, “The Candy Man”. Odom was married to Khloé Kardashian, and the couple’s wedding featured on an episode of the reality show “Keeping Up with the Kardashians”. Not a show that I have ever seen …

Giacomo Casanova was an 18th-century adventurer from Venice. We know so much about him, and his reputation as a womanizer, because he left us his autobiography “Histoire de ma vie” (Story of My Life). A guy recounting stories of his love life and conquests. All true, I am sure …

The city of Gary, Indiana is located just 25 miles from downtown Chicago and falls within the Chicago metropolitan area (also known as “Chicagoland”). Gary was founded by US Steel in 1906, as the company selected it as the site for a new steel plant. The name “Gary” was chosen in honor of Elbert H. Gary, who was the key player in setting up US Steel in 1901.

A gale is a very strong wind that is defined by Beaufort Wind Scale as a wind with speeds from 50 to just over 100 kilometers per hour.

37. Leave high and dry … or, when divided into three parts, what the answers to starred clues are encompassed by : ABANDON or AB AND ON