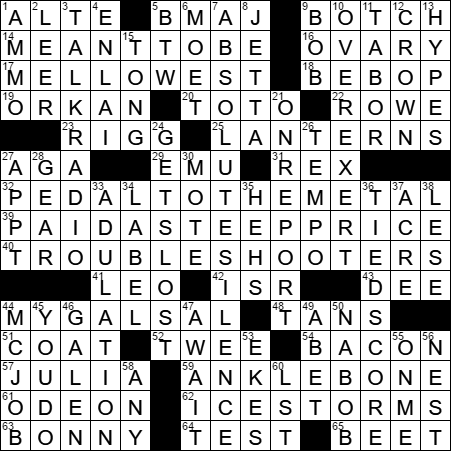 Mannheim is a city in southwestern Germany. The city is a little unusual in that it has streets and avenues laid out in a grid pattern, rather like an American city. For this reason, Mannheim has the nickname “die Quadratestadt” (city of the squares).

An oocyte is an immature egg cell involved in reproduction.

The ovaries are the female reproductive organs. Most female vertebrates have two ovaries. However, only the left ovary develops in female birds, with the right remaining vestigial.

“Mork & Mindy” is a sitcom that originally aired from 1978 to 1982. The title characters were played by Robin Williams and Pam Dawber. Mork is an alien from the planet Ork who reports back to his superior called Orson. Orson is played by voice actor Ralph James. Ralph James was also known for providing the voice of Mr Turtle in famous Tootsie Pop commercials in the seventies. Nanu nanu!

Toto is an American rock band dating back to 1977. As well as their famous “Rosanna”, they also sang another good tune called “Africa”.

Nicholas Rowe was an English playwright and poet who was appointed Poet Laureate in 1715. His last play was “The Tragedy of Lady Jane Grey”.

Lady Jane Grey was known as the “Nine Days’ Queen”. Lady Jane was the cousin of Edward VI and succeeded to the throne when the king named her his successor on his deathbed. Edward VI was the only son of Henry VIII. Henry’s eldest child Mary was the rightful heir to the throne and she deposed Lady Jane Grey in just a few days to become Queen Mary I (aka “Bloody Mary”). Lady Jane was imprisoned in the Tower of London and eventually beheaded.

Diana Rigg is a marvelous actress from England who is best known for playing Emma Peel on the hit sixties show “The Avengers”. Rigg also won an Emmy for her performance in a 1997 television adaptation of “Rebecca”. In my humble opinion, she was also the best-ever Bond Girl (opposite George Lazenby, the worst-ever Bond Guy), in “On Her Majesty’s Secret Service” …

The Queen of Thorns is a character on “A Game of Thrones”.

“Tōrō nagashi” is a ceremony in Japan in which lighted paper lanterns are floated down a river. The ceremony is performed at the end of the Buddhist Bon Festival, with the intent of guiding departed souls into the spirit world. “Tōrō” is a Japanese word for “lantern”, and “nagashi” translates as “cruise, flow”.

The collection of seven bones in the foot just below the ankle are known collectively as the tarsus. One of those bones is the talus (plural “tali”), more commonly called the anklebone. The talus is the lower part of the ankle joint and articulates with the lower ends of the tibia and fibula in the lower leg.

Bonny Doon is a community in California, located just northwest of Santa Cruz. It was founded in the mid-1800s as a logging camp and was named by Scotsman John Burns in 1902 after a line in the Robert Burns song “The Banks O’ Doon”. The Doon is a Scottish river. You might be familiar with Bonny Doon wines. The Bonny Doon Vineyard is a very successful winery operating in the area.

A smorgasbord is a buffet-style meal that originated in Sweden. “Smörgåsbord” is a Swedish word comprised of “smörgås” meaning “open-faced sandwich” and “bord” meaning “table”.

Galen of Pergamum was a physician of Ancient Rome (of Greek ethnicity). Galen mainly worked on monkeys, dissecting their bodies to learn about physiology, as it was not permitted to dissect human bodies in his day.

A nabob is a person of wealth and prominence. “Nabob” comes from the title of a governor in India.

17. Relaxed to the max : MELLOWEST

32. Metaphor for high speed : PEDAL TO THE METAL

54. It makes everything taste better, they say : BACON

10. Exhaust (oneself), as in a workout : OVEREXERT