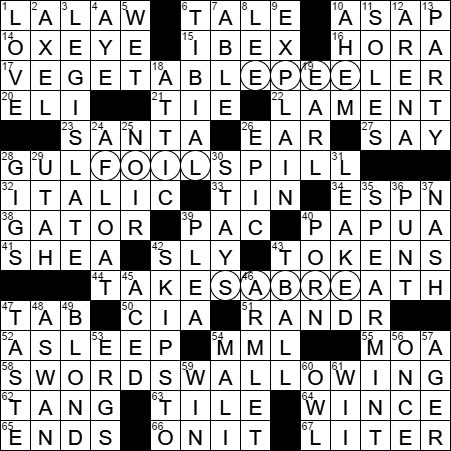 The infamous Deepwater Horizon oil rig was operated by BP from 2001 in the Gulf of Mexico. In 2013, an explosion and blowout killed 11 men, and caused the largest oil spill ever recorded in US waters.

Rummikub is a tile-based game that was created in the 1940s by Ephraim Hertzano in Israel. Hertzano’s game combines elements of mahjong with the card game rummy. Rummikub was the bestselling game in the US back in 1977.

An Axel is a forward take-off jump in figure skating. The maneuver was first performed by Norwegian Axel Paulsen at the 1882 World Figure Skating championships.

A wet blanket might be used to extinguish a fire. We use the phrase “wet blanket” figuratively to describe someone who tends to dampen enthusiasm or enjoyment.

Aeneas was a Trojan who traveled to Italy and became the ancestor of all Romans. Aeneas’s story is told in Virgil’s epic poem “The Aeneid”.

The principal river in western Africa is the Niger, running 2,600 miles through the continent. The river has a boomerang shape, taking a sharp turn around the the ancient city of Timbuktu in Mali.

58. Activity one might see at a circus … or in the Across answers containing circles? : SWORD-SWALLOWING

42. Reaches without reading the intervening pages : SKIPS TO