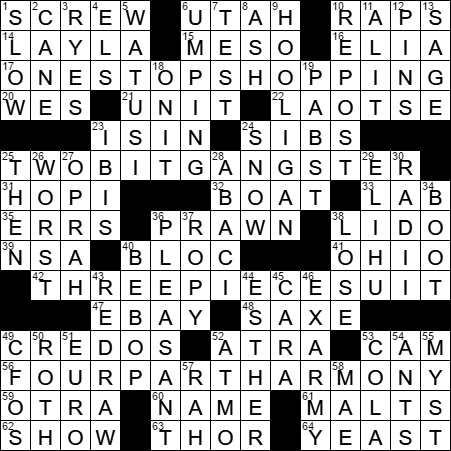 Today’s themed answers each start with a number. We have the sequence ONE, TWO, THREE, FOUR moving from the top to the bottom of the grid:

Layla is one of the great rock anthems of the seventies, released by Derek and the Dominos as a single in 1971. It is a masterpiece of composition, with the first half of the song a great vehicle for the guitar-playing talents of Eric Clapton. The second half is a beautifully melodic piano coda (a coda … taking up half the length of the track!). To top things off we have the “unplugged” version recorded by Clapton in 1992, a fabulous and inventive variation on the original.

Wes Craven was a very successful film director and writer specializing in movies of the horror genre, which means I don’t watch them! He was responsible for “A Nightmare on Elm Street” and the “Scream” films. Craven passed away in August 2015.

A pueblo is a Native American village, a term used in the American Southwest. The buildings in a pueblo are usually made of stone and adobe mud.

The National Security Agency (NSA) seal was introduced in 1965 and features an eagle perched upon a key. The eagle represents the agency’s national mission, and the key represents security.

“Bloc” is the French word for “block”.

Here’s another word that often catches me out. What we call a vest here in the US is a waistcoat back in Ireland. And the Irish use the word “vest” for an undershirt.

Fortunately for crossword constructors, the Atra was introduced by Gillette in 1977 as the first razor with a pivoting head. The Atra was sold as the Contour in some markets and its derivative products are still around today.

Barbershop music is played in the a cappella style, meaning that it is unaccompanied vocal music. Barbershop music originated in the African American communities in the South, as gospel quartets often gathered in neighborhood barber shops to sing together.

“Hooligan” is a word that arose in England in the late 1800s and describes an aggressive and violent youth. The term is apparently derived from the Irish family name of “Houlihan”. I can’t think why …

A “kegler” is a person who plays ten-pin bowling. “Kegel” is a German word for “bowling pin”.

“Parsley, Sage, Rosemary and Thyme” is a studio album released by Simon and Garfunkel in 1966. The title is a lyric from the opening track “Scarborough Fair/Canticle”.

“Scarborough Fair” is a delightful ballad that originated in Yorkshire in the North of England. Simon & Garfunkel recorded a famous version of the song in 1966, setting it in counterpoint with one of Simon’s own creations called “Canticle”.

Oprah Winfrey’s multimedia production company is known as Harpo Studios. “Harpo” is “Oprah” spelled backwards, and is also the name of the husband of the character Winfrey played in the movie “The Color Purple”.

Radius (plural “radii”) is a Latin word, as one might expect, meaning “spoke of a wheel”. Makes sense, huh …?

46. Formerly in the military : EX-ARMY