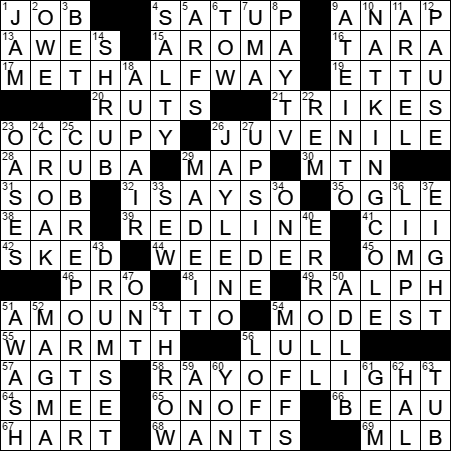 Each of today’s themed answers starts with the name of a Major League Baseball team player:

Scarlett O’Hara’s home is the Tara plantation, in Margaret Mitchell’s “Gone with the Wind”. Tara was founded not far from the Georgia city of Jonesboro by Scarlett’s father, Irish immigrant Gerald O’Hara. Gerald won the square mile of land on which Tara was built in an all-night poker game. He named his new abode after the Hill of Tara back in his home country, the ancient seat of the High King of Ireland.

The New York Mets baseball team was founded in 1962 as a replacement for two teams that the city had lost, namely the Brooklyn Dodgers and the New York Giants. For several years the Mets played very poorly, finishing no better than second-to-last in their division. Then of course along came the “Miracle Mets” (aka “Amazin’ Mets”) who beat the Baltimore Orioles in 1969 to claim the World Series in a huge upset.

The Occupy movement is a protest directed against economic and social inequality worldwide. The first such protest to garner major attention took place in Wall Street in 2011, and from there similar protests spread around the world.

Mount Rainier is an active volcano in the state of Washington in the Cascade Mountain Range. Native Americans first called the peak “Tacoma” meaning “mother of waters”. When Captain George Vancouver discovered Puget Sound in 1792, he named the peak in honor of his friend Rear Admiral Peter Rainier. There have been movements to change the name back to Tacoma, but these seem to have petered out (pun!).

OMG is text-speak for “Oh My Gosh!” “Oh My Goodness!” or any other G words you might think of …

Chlorine is a yellow-green gas that is very poisonous at high concentrations. As such, chlorine gas was used in WWI, earning the shameful title of the world’s first gaseous chemical weapon. Chlorine was mistakenly believed to be an oxide for many years, until English chemist Sir Humphry Davy correctly concluded that the gas was an element. Davy coined the name “chlorine”, from the Greek “chloros” meaning “”green-yellow”.

Ralph Waldo Emerson was an essayist and poet who was active in the mid-1800s. Most of the essays that Emerson wrote were composed originally as lectures and then revised for print. He is often referred to as “The Sage of Concord”, as Emerson spent much of his life in Concord, Massachusetts.

The Tampa Bay Rays are a relatively “young” franchise, having been formed in 1998. The initial name of the franchise was the Tampa Bay Devil Rays. While known as the Devil Rays, the team finished last in the league in almost every year. The name was changed to the Tampa Bay Rays in 2008, and I am told the Rays started into a streak of winning seasons soon after.

In J. M. Barrie’s play and novel about Peter Pan, Smee is one of Captain Hook’s pirates and is Hook’s right-hand man. Smee is described by Barrie as being “Irish” and “a man who stabbed without offence”. Nice guy! Captain Hook and Smee sail on the pirate ship called the Jolly Roger.

Not only did I have to learn new spellings of words when I moved here from Ireland (here I go, whining again!) but I had to learn that down is the “off” position for a switch most times, and up is the “on” position. It’s exactly the opposite on the other side of the pond. Have I ever ranted about the steering wheel position in the car? Aaargh!

69. Sports org. for the players that begin the answers to starred clues : MLB

Uma Thurman started her working career as a fashion model, at the age of 15. She appeared in her first movies at 17, with her most acclaimed early role being Cécile de Volanges in 1988’s “Dangerous Liaisons”. Thurman’s career really took off when she played the gangster’s “moll” in Quentin Tarantino’s “Pulp Fiction” in 1994. My favorite of all Thurman’s movies is “The Truth About Cats & Dog’s”, a less acclaimed romcom released in 1996. She took a few years off from 1998 until 2002, doing very little work in favor of motherhood. It was Tarantino who relaunched her career, giving her the lead in the “Kill Bill” films.

Natalie Cole is the daughter of Nat King Cole. Natalie’s mother was Maria Cole, a singer with the Duke Ellington Orchestra. The most famous version of the hit song “Unforgettable” was released in 1951 by Nat King Cole. In 1991, Natalie Cole recorded a version that was mixed with an earlier 1961 version sung by her father, creating an “unforgettable” father-daughter duet that was made 26 years after Nat King Cole had passed away.

The Washington Nationals (“The Nats”) baseball team started out life as the Montreal Expos in 1969, and were the first Major League Baseball team in Canada. The Expos moved to Washington in 2005 becoming the Nats. There are only two Major Leagues teams that have never played in a World Series, one being the Mariners and the other the Nats.

The Russian cooperative associations known as artels were often pretty informal affairs. Basically any group could get together and form an artel for any specific commercial purpose … anything from gold-mining and fishing, to stealing and begging.

“REM” is an acronym, short for Rapid Eye Movement sleep. REM sleep takes up 20-25% of the sleeping hours and is the period associated with one’s most vivid dreams.

An isolated area of vegetation in a desert is called an oasis (plural “oases”). As water is needed for plant growth, an oasis might also include a spring, pond or small lake.

Erroll Garner was a jazz pianist and composer. Garner’s most famous composition by far is 1954’s “Misty”, which has become a jazz standard.

“Ad libitum” is a Latin phrase meaning “at one’s pleasure”. In common usage the phrase is usually shortened to “ad lib”. On the stage the concept of an “ad lib” is very familiar.

“Hither and yon” is a phrase meaning “from here to over there”.

15. One may drift in from the kitchen : AROMA

69. Sports org. for the players that begin the answers to starred clues : MLB