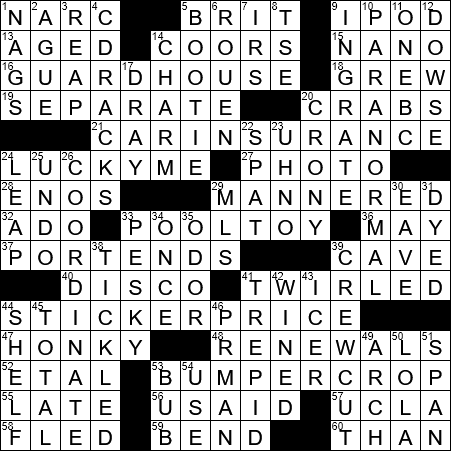 Today’s CROP of themed answers each start with a word that often follows BUMPER:

Bumper guards are the front and rear bumpers on a car.

Dungeness crabs are found of the west coast of North America. The species takes its name from the port of Dungeness in Washington state, although the port is named for a headland in the southwest of England called Dungeness.

Fishing for Alaskan king crab is a dangerous occupation, about 80 times more dangerous that the average job. Apparently, about one crab fisherman dies every week during the fishing season, mostly from drowning or hypothermia.

Bumper cars are a fairground ride comprising electrically-powered cars that are driven with the intent of bumping into each other. Invented in the US, one of the most successful brands of bumper car is the Dodgem. In fact, the term “dodgem” is used generically instead of “bumper car” outside of North America.

Bumper pool is a variant of pocket billiards that is played on a special pool table that includes cushioned obstacles (called “bumpers” on the surface. Several of the bumpers guard the pockets, which are actually circular holes in the playing surface.

The month of May was named after Maia, the Greek goddess of fertility.

Wayne Manor is where Bruce Wayne lives, the alter-ego of Batman. It is a huge manor that lies just outside Gotham City. Looking after the house is the Wayne family servant, Alfred. Beneath the grounds of the manor is an extensive cave system where Bruce Wayne put together his Batcave. Access is to the cave is via a staircase behind a hidden door. The door is opened by moving the hands of a non-functioning grandfather clock to 10:47, the time at which Wayne’s parents were murdered. It is the murder of his parents that sets Bruce off on his journey of crime fighting.

“Honky Tonk Women” is a 1969 song released by the Rolling Stones that topped the charts both in the US and the UK. The term “honky tonk women” refers to dancing girls who worked in a saloon. Mick Jagger and Keith Richards actually wrote the song while on vacation on a ranch in the city of Matão, Brazil.

The US Agency for International Development (USAID) was set up by President John F. Kennedy in 1961. The agency’s mission is to end extreme poverty and promote democratic societies, while helping to advance the security and prosperity of the US.

A garner is a granary, a building in which grain is stored. The related verb “to garner” means to gather into a granary. We also use the verb figuratively to mean “accumulate, collect” in general.

Dowsing is the practice of divining, not just for water, but also for buried metals and gemstones. Often a dowser will use a Y-shaped or L-shaped rod as a tool, which can also be called a dowser. Here in the US, the tool used might be referred to as a “witching rod”, as it is usually made from witch-hazel.

A dray is a sideless, 4-wheeled cart that is used for hauling goods.

The Chicago Fire is the name of the city’s Major League Soccer (MLS) team. The Fire were founded in 1997, and are named for the Great Chicago Fire of 1871.

“Lola” is a fabulous song, written by Ray Davies and released by the Kinks back in 1970. Inspired by a real life incident, the lyrics tell of young man who met a young “lady” in a club, danced with her, and then discovered “she” was actually a transvestite. The storyline isn’t very traditional, but the music is superb.

The Kinks were an English band who participated in the British Invasion of America in the sixties, although only briefly. After touring the US in the middle of 1965, the American Federation of Musicians refused permits for the Kinks to book concerts for four years, apparently in response to some rowdy on-stage behavior by the band.

“Bub” is American slang, a term used to address males. “Bub” is possibly a variation of “bud”.

53. Abundant farm yield … and what the first words of the answers to starred clues comprise? : BUMPER CROP