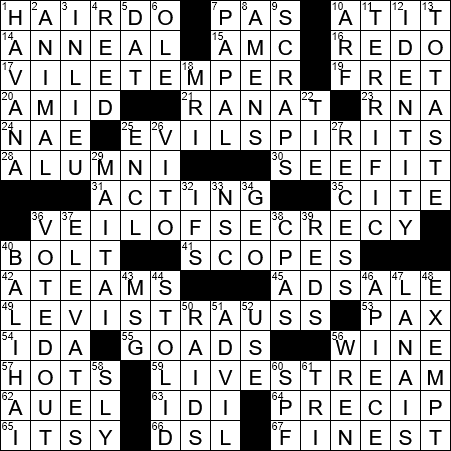 Today’s themed answers each start with words formed from the letters I-V-E-L:

That distinctive “beehive” hairstyle is also called a B-52, because the round, beehive-shape also resembles the bulbous nose of a B-52 bomber! The style originated in 1958, and is credited to Margaret Vinci Heldt, the owner of a hair salon in downtown Chicago. I’m not a fan of the beehive, but I do have to say that Audrey Hepburn carried it off in “Breakfast at Tiffany’s”, as did Dusty Springfield in her heyday.

14. Free from stress by heating, as metal : ANNEAL

One anneals glass or metal by exposing to a very specific temperature profile, resulting in a tougher or less brittle product.

There doesn’t seem to be a definitive account for the origin of the term “Mulligan”, most often used for a shot do-over in golf. There are lots of stories about golfers named Mulligan though, and I suspect one of them may be true …

An “alumnus” (plural … alumni) is a graduate or former student of a school or college. The female form is “alumna” (plural … alumnae). The term comes into English from Latin, in which alumnus means foster-son or pupil. “Alum” is an informal term used for either an alumna or an alumnus.

Pax was the Roman goddess of peace, and was the daughter of Jupiter (the god of the sky and thunder) and Justitia (the goddess of justice). The Greek equivalent to Pax was Eirene.

Beaujolais is a red wine made from the Gamay grape that is produced in the Beaujolais historical province that is part of the Burgundy wine-making region.

Red Hots are cinnamon-flavored candy pieces. I just found out that Red Hots are sometimes used in apple sauce …

“Our Man in Havana” is a marvelously entertaining novel by Graham Greene, first published in 1958. It’s all about a British vacuum cleaner salesman who lives in Havana, Cuba. The salesman is recruited by the British secret service, and then sends fake information to London, just to get paid. The novel was adapted into a fabulous film of the same name in 1959, starring Alec Guinness.

Graham Greene was a writer and playwright from England. Greene wrote some of my favorite novels, including “Brighton Rock”, “The End of the Affair”, “The Confidential Agent”, “The Third Man”, “The Quiet American” and “Our Man in Havana”. Greene’s books often feature espionage in exotic locales. Greene himself worked for MI6, the UK’s foreign intelligence agency. In fact, Greene’s MI6 supervisor was Kim Philby, the famed Soviet spy who penetrated high into British intelligence.

Rex Reed is a film critic who used to co-host “At the Movies”, the show that originally featured Gene Siskel and Roger Ebert.

The entire community of fans of the New Orlean Saints are sometimes referred to as the “Who Dat Nation”. The name comes from a popular chant heard at a Saints game:

7. Like a visit from the Bishop of Rome : PAPAL

The Pope is the Bishop of Rome and the leader of the Roman Catholic Church. The term “pope” comes from the Latin “papa”, and ultimately from the Greek “pappas”, with both terms being a child’s word for “father”.

A collage is a piece of artwork that is made by assembling pieces of paper and objects that are glued onto paper or canvas. The term “collage” comes from the French “coller” meaning “to glue”.

Mario Puzo created the Corleone Mafia family in his 1969 novel “The Godfather”. The head of the family is Vito Corleone (whose birth name was Vito Andolini), a native of Corleone in Sicily. He was given the name Corleone by immigration officers at Ellis Island.

Geos were small vehicles manufactured by General Motors mainly in the nineties. Geos were designed to compete head-to-head with the small imports that were gaining market share at the time in the US. Some Geo models that you might remember are the Metro, the Prizm and the Storm. The cars were actually built as joint-ventures with Japanese manufacturers. The Prizm was a GM/Toyota project, the Metro was GM/Suzuki, and the Storm was GM/Isuzu.

A lanai is a type of veranda, and a design that originated in Hawaii. A kind blog reader tells me that the etymology of “lanai” seems unclear, but that the island name of “Lana’i” is not related.

14. Free from stress by heating, as metal : ANNEAL

25. Demons and such : EVIL SPIRITS

7. Like a visit from the Bishop of Rome : PAPAL

36. Removed from office via election : VOTED OUT