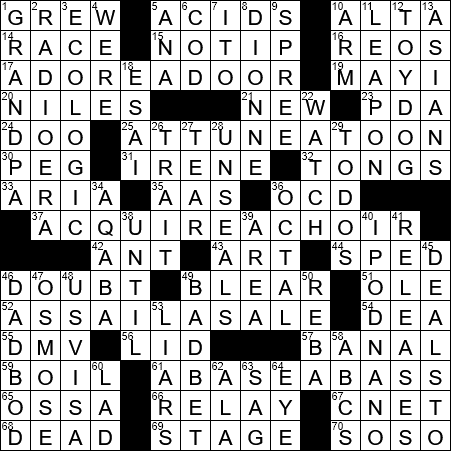 Each of today’s themed answers comprises two parts: a verb followed by an indefinite article with a noun. The catch is that the two parts of the answer sound exactly the same:

Alta ski resort actually lies within the Salt Lake City Metropolitan Area. The first ski lift in the resort was opened way back in 1939. Today, Alta is one of only three ski resorts in the country that prohibits snowboarding (along with Deer Valley, Utah and Mad River Glen, Vermont. The ski resort of Snowbird located next to Alta has been in operation since 1971.

“Scooby-Doo, Where Are You!” is a series of cartoons produced for Hanna-Barbera Productions, first broadcast in 1969. The title character is a great Dane dog owned by a young male called Shaggy Rogers. The character’s name was inspired by the famous “doo-be-doo-be-doo” refrain in the Frank Sinatra hit “Strangers in the Night”. Shaggy was voiced by famed disk jockey Casey Kasem.

Bugs Buggy debuted in the 1940 animated short “A Wild Hare”. Since then, Bugs has appeared in more films than any other cartoon character.

The AMC drama “Breaking Bad” is a well-written show about a high school teacher stricken by lung cancer who turns to a life of crime to make money. It turns out that the teacher has a talent for making high-quality crystal meth. The show was created by Vince Gilligan who had spent many years as producer and writer of “The X-Files”. There is a “Breaking Bad” spin-off show running on AMC called “Better Call Saul” that focuses on the life of lawyer Saul Goodman. I hear that it’s pretty good …

Mount Ossa in Greece is located between Mt. Pelion in the south, and the famed Mt. Olympus in the north. Mount Ossa is also known as Kissavos.

“Ugly Betty” is a drama-comedy show that originally aired on television from 2006 to 2010. The show is based on a telenovela soap opera from Colombia called “Yo soy Betty, la fea”. The title role of Betty Suarez is played by America Ferrera.

Midori Ito is a Japanese figure skater. Ito was the first woman to land a triple/triple jump and a triple axel in competition. In fact, she landed her first triple jump in training when she was only 8 years old.

Dionne Warwick is a very, very successful singer, with more Top 100 hits than any other female vocalist other than Aretha Franklin. Warwick had a pretty successful cousin who was a singer as well … named Whitney Houston.

The coastal city of Aqaba is the only seaport in the country of Jordan. The city lies at the very northern tip of the Gulf of Aqaba, which is off the Red Sea.

47. Diffuse slowly through a membrane : OSMOSE

48. Permit to enter the States : US VISA

17. Fall in love with something at the home improvement center? : ADORE A DOOR

37. Get voices in all ranges? : ACQUIRE A CHOIR

28. Opens, as an official document : UNSEALS

47. Diffuse slowly through a membrane : OSMOSE

48. Permit to enter the States : US VISA