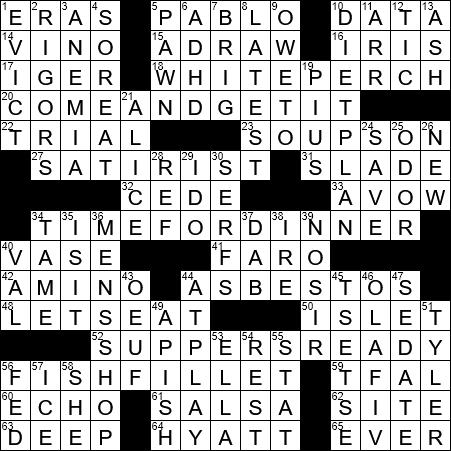 Each of today’s themed answers has the same clue. And, that clue is provided by the reveal answer “TIME FOR DINNER”:

Pablo Sandoval is a Major League third baseman from Venezuela. Sandoval has the cute and cuddly nickname “Kung Fu Panda”, a nickname given to him by teammate Barry Zito when they played together for the San Francisco Giants.

Nate Silver is a statistician who first gained notoriety by developing a forecasting system that predicted the future performance of baseball players. He then made a name for himself in the world of politics by predicting the outcome of the 2008 US presidential race on his website FiveThirtyEight.com. Silver successfully predicted the outcome of the election in 49 of the 50 states, missing out on Indiana, which Barack Obama won by less than 1% of the vote. FiveThirtyEight was less successful in predicting the specifics of the 2012 presidential election, but came closer than almost all other pollsters. In 2016, FiveThirtyEight predicted a victory for Hillary Clinton, but with a much lower probability than other poll aggregators. And, they all got it wrong. Oh, and why the name FiveThirtyEight.com? Because there are 538 electors in the US electoral college.

In Italian, one might order a glass of “vino” (wine) in a “ristorante” (restaurant).

The fish known as a white perch is a perch at all, but rather is a member of the temperate bass family.

Chesapeake Bay is on the Atlantic coast and is surrounded by the states of Maryland and Virginia. Chesapeake Bay is the largest estuary in the whole country, with over 150 rivers and streams draining into it, including the Potomac.

Jack Slade was a Pony Express superintendent originally from Illinois who developed a reputation as a Wild West gunfighter. Apparently, that reputation was greatly exaggerated. Of the 26 killings attributed to Slade, only the first one is undisputed. He was also fond of the booze, and was fired from his job because of his drinking problem. In 1864, Spade was hanged by a bunch of vigilantes in Virginia City, Montana for disturbing the peace during a drunken spree.

Faro is a card game somewhat akin to Baccarat that was popular in England and France in the 18th century. Faro made it to the Old West, where it became a favorite of Doc Holliday and Wyatt Earp. The origin of the name “Faro” is unclear. One popular theory is that Faro is a contraction of ‘pharaoh’ given that Egyptian motifs used to be common on playing cards of the period. There’s another theory involving the usual suspects: Irish immigrants and famines …

Asbestos was very, very popular in so many applications for many years. The world’s largest asbestos mine was in Quebec, Canada in the town of … Asbestos.

The Hyatt hotel chain takes its name from the first hotel in the group, i.e. Hyatt House at Los Angeles International Airport that was purchased in 1957. Among other things, Hyatt is famous for designing the world’s first atrium hotel, the Hyatt Regency in Atlanta.

The term “anemia” (or “anaemia” as we write it back in Ireland) comes from a Greek word meaning “lack of blood”. Anemia is a lack of iron in the blood, or a low red blood cell count. Tiredness is a symptom of the condition, and so we use the term “anemic” figuratively to mean “lacking in vitality or substance”.

5. Chess piece that may be promoted : PAWN

A brig, short for brigantine, is a two-masted sailing vessel. It was the use of brigantines as prison ships that led to use of “brig” as the word for a jail or prison cell on a seagoing vessel.

The weight control company called Jenny Craig was started in 1983 by Jenny and Sidney Craig in Melbourne, Australia. Jenny Craig came to North American two years later, and is headquartered in Carlsbad, California.

“The Young Pope” is an English-language drama produced in Italy that has a cast headed by Jude Law and Diane Keaton. Law plays newly elected Pope Pius XIII, and former Archbishop of New York. Keaton plays an American nun who serves as the pope’s personal secretary.

Alice Walker is an author and poet. Walker’s best known work is the novel “The Color Purple”, which earned her the National Book Award and the Pulitzer Prize. “The Color Purple” was adapted into a very successful film of the same name, directed by Steven Spielberg.

A football referee is sometimes called a “zebra”, a reference to the striped shirt that is part of a referee’s uniform.

Back in the 14th century, a haberdasher was a dealer in small wares. By the late 1800s, the term had evolved to mean a purveyor of menswear, and in particular was associated with the sale of hats.

Val Kilmer’s first big leading role in a movie was playing Jim Morrison in Oliver Stone’s 1991 biopic “The Doors”. A few years later, Kilmer was chosen for the lead in another big production, “Batman Forever”. Things haven’t really gone as well for Kilmer since then, I’d say. Off the screen, he flirted with the idea of running for Governor of New Mexico in 2010. A Hollywood actor as a Governor? Would never happen …

“Tombstone” is a 1993 Western movie that has a storyline centered on the Gunfight at the O.K. Corral and its aftermath. The cast includes Val Kilmer as Doc Holliday, and Kurt Russell as Wyatt Earp. “Tombstone” was released six months before the ostensibly competing movie “Wyatt Earp” starring Kevin Costner. If there was a competition between the two films, then “Tombstone” won, both in terms of ticket sales and critical response.

In French, an “oeuf” (egg) is the main ingredient in “une omelette” (an omelet).

Tyler Perry is an actor, comedian and writer who is perhaps best known in front of the camera for his drag performances as tough elderly woman “Madea”. Perry also created the sitcom “Tyler Perry’s House of Payne” that ran for eight seasons from 2006 until 2012.

5. Chess piece that may be promoted : PAWN

9. Have financing from : OWE TO