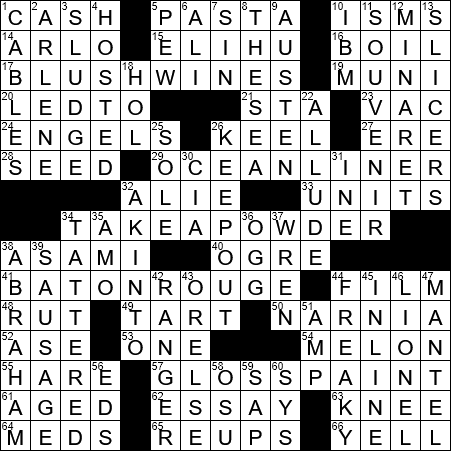 Each of today’s themed answers includes an item used by a cosmetologist:

5. Alfredo may be associated with it : PASTA

A municipal bond (A “muni”) is one that is issued by a city or local government, or some similar agency. Munis have an advantage over other investments in that any interest earned on the bond is usually exempt from state and federal income taxes.

A janitor is someone who takes care of the maintenance or cleaning of a building. An older definition of the term is “doorman”. Our word comes from the Latin “ianitor” meaning “doorkeeper”.

The literal meaning of “keel over” is to capsize, turn a boat over so that her keel lies up from the surface. We use the term figuratively to mean “collapse, faint”.

Artist and writer Marius de Zayas interviewed Pablo Picasso in 1910, and published the interview in an article titled “Picasso Speaks”. One of Picasso’s most famous quotes (“Art is a lie …”) is found this article:

We all know that Art is not truth. Art is a lie that makes us realize truth, at least the truth that is given us to understand. The artist must know the manner whereby to convince others of the truthfulness of his lies.

The phrase “to take a powder” means “to scram, vanish”. This meaning was first recorded in the 1920s, and may derive from the medical instruction “take a powder”, which may imply having to make a quick exit!

The fruit of the crabapple tree is very sour and tart. It is from this acidic quality that we get the term “crab”, describing a person who is grouchy and irritable.

In the C. S. Lewis series of books known as “The Chronicles of Narnia”, Aslan is the name of the lion character (as in the title “The Lion, the Witch and the Wardrobe”). “Aslan” is actually the Turkish word for lion. Anyone who has read the books will recognize the the remarkable similarity between the story of Aslan and the story of Christ, including a sacrifice and resurrection.

Enzymes are basically catalysts, chemicals that act to increase the rate of a particular chemical reaction. For example, starches will break down into sugars over time, especially under the right conditions. However, in the presence of the enzyme amylase (found in saliva) this production of sugar happens very, very quickly.

Yosemite Sam is a cartoon character who frequently goes up against Bugs Bunny. As Sam himself would say, “I’m the fastest gun north, south, east, aaaaaaand west of the Pecos.” Yosemite Sam made his debut appearance in a 1945 cartoon short titled “Hare Trigger”.

An essay might be part of a final examination.

8. Annabel Lee’s kingdom was by it : THE SEA

Elinor Dashwood is the delightful main character in Jane Austen’s novel “Sense and Sensibility”. Dashwood is played by Emma Thompson in my favorite adaptation of the story, the 1995 movie of the same name directed by Ang Lee. Actress Thompson wrote the film’s screenplay.

A souvenir is a memento, a token of remembrance. We imported the word from French, in which language it has the same meaning. The term comes from the Latin “subvenire” meaning “to come to mind”, or literally “to come up”.

It is believed that the first snow globes were introduced in France in the early 1800s. They were a development of glass paperweights that were already common, and were initially used to do the same job. Do you know who owns the biggest collection of snow globes in the world, over 8,000 of them? That would be the actor Corbin Bernsen of “LA Law” and “Psych” fame.

A minaret is an architectural feature of Islamic mosques, a tall tower with an onion-shaped crown that is used for the call to prayer. The world’s oldest minaret is part of the Great Mosque of Kairouan in Tunisia, having been completed in 836 CE. The term “minaret” comes from the Arabic for “lighthouse”.

A muezzin is someone responsible for leading prayer in a mosque. The muezzin is also the man who recites the Adhan, the call to prayer, at five designated times each day.

After six years in the US House of Representatives, Mike Pompeo was named CIA Director by President Trump. Before going into politics, Pompeo served in the US Army for five years, and worked in industry for nine years.

Lionel is the name most associated with toy trains in the US. The first Lionel trains rolled off the production line in 1901 and they are still produced today, although the original Lionel Corporation is long gone. In 1995, the brand was bought by an investment company that included train enthusiast Neil Young (the singer), and operated as Lionel, LLC. Neil Young’s financial involvement ended after a 2008 reorganization of the company following a Chapter 11 bankruptcy filing, but the company is still producing and selling.

“Sap” is slang for a fool, someone easily scammed. The term arose in the early 1800s in Britain when it was used in “saphead” and “sapskull”.

CBS used to be known as the Columbia Broadcasting System. It is the second-largest broadcaster in the world, second only to the BBC in the UK. CBS introduced its “eye” logo in 1951. That logo is based on a Pennsylvania Dutch hex sign.