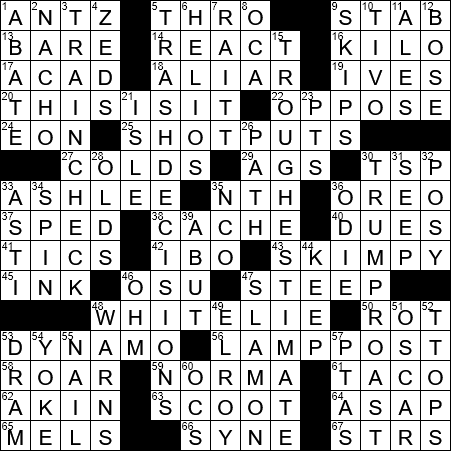 Today’s themed answers are all in the down-direction. Each is a common term, but with a letter T added on TOP:

West Point is a military reservation in New York State, located north of New York City. West Point was first occupied by the Continental Army way back in 1778, making it the longest, continually-occupied military post in the country. Cadet training has taken place at the garrison since 1794, although Congress funding for a US Military Academy (USMA) didn’t start until 1802. The first female cadets were admitted to West Point in 1976, and today about 15% of all new cadets are women.

Currier and Ives was a printmaking concern in New York City, run by Nathaniel Currier and his partner James Merritt Ives from 1834 to 1907. The firm specialized in making affordable, hand-colored black and white lithographs.

Shot put, or events like shot put, have been around for millennia, but the first events that truly resemble today’s track and field event had to come with the invention of the cannonball. Soldiers would “putt” (throw) cannonballs as far as possible in attempts to outperform each other. Shot put has been in the modern Olympic Games since day-one, with American Robert Garrett winning the gold in the first games in 1896.

The common cold is caused by a viral infection of the upper respiratory tract. There are over 200 strains of virus that are known to cause the disease.

Ashlee Simpson is the younger sister of Jessica Simpson. They are both reality show stars. I know no more … I don’t want to know any more …

A cache is a secret supply. We imported the term into English from French Canadian trappers in the 17th century. Back then, “cache” was a slang term for a “hiding place for stores”, derived from the French verb “cacher” meaning “to hide”.

The Igbo (also “Ibo”) people are an ethnic group living in southeastern Nigeria.

Corvallis is a city in western Oregon that is home to Oregon State University (OSU). Corvallis was the capital of the Oregon Territory before Salem was selected as the seat of government.

Between you, me and the lamppost.

In the sitcom “The Wonder Years”, Kevin Arnold’s mother Norma was played by actress Alley Mills.

“The Wonder Years” is a comedy drama that originally ran on television from 1988 to 1993. Star of the show was 13-year-old Fred Savage who played Kevin Arnold. Kevin’s love interest was Winnie Cooper, played by Danica McKellar.

The dish known as “nachos” were supposedly created by the maître d’ at a restaurant called the Victory Club in the city of Piedras Negras, Coahuila, Mexico. The maître d’’s name was Ignacio “Nacho” Anaya.

Helios was the god of the Sun in Greek mythology. He was the brother of Selene, the goddess of the moon, and Eos, the goddess of the dawn. Helios drove his chariot of the sun across the sky during the day, returning to the East at night be travelling through the ocean. The Roman equivalent to Helios was Sol.

Bonnie Raitt is a blues singer originally from Burbank, California. Raitt has won nine Grammys for her work, but she is perhaps as well known for her political activism as she is for her music. She was no fan of President George W. Bush while he was in office, and she sure did show it.

The plant called an oca is also known as the New Zealand Yam. The tubers of the oca are used as a root vegetable.

The deli meat known as “baloney” (i.e. “Bologna sausage”) is an American invention. It was given the name “baloney” because it resembles Italian mortadella sausage, which originated in the city of Bologna in northern Italy.

52. Features of some sports cars, and what this puzzle’s four longest answers have in common : T-TOPS