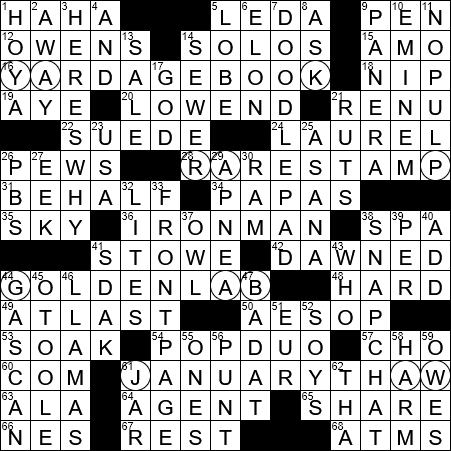 The starting and ending letters in today’s themed answers spell out a synonym of CHAT. So, those CHAT words have been SNAPPED, to make room for the middle letters in each answer:

The Paper Mate pen was introduced in 1949 by the Frawley Pen Company, with the attraction being that it delivered a revolutionary ink that dried instantly on paper.

Iron Man is another one of those comic book superheroes, this one created by Stan Lee for Marvel Comics. The character has become very famous in recent years since the appearance of the 2008 action movie “Iron Man” starring Robert Downey, Jr. in the title role. Iron Man’s love interest, Pepper Potts, is routinely played by Gwyneth Paltrow in the same series of films.

Harriet Beecher Stowe’s most famous and most successful work is “Uncle Tom’s Cabin”. It was also her first novel. Her second was published in 1856:”Dred: A Tale of the Great Dismal Swamp”.

A golden Labrador is a cross between a golden retriever and a Labrador. The same cross is also referred to as a “goldador”.

50. One of his stories is the source of the idiom “sour grapes” : AESOP

Our expression “sour grapes” is an allusion to one of Aesop’s fables, the story of “The Fox and the Grapes”. In the fable, a squirrel could climb up to grapes high in a tree that a fox was unsuccessful in getting to. On seeing this, the fox said, “It’s okay, the grapes were sour anyway”.

Singing duo Sonny & Cher started out in the mid-1960s as backing singers working with Phil Spector. The couple married in 1964, and the next year released their breakthrough numbers “Baby Don’t Go” and “I Got You Babe”. Sonny and Cher divorced in 1975, and dissolved their act that same year. Cher moved onto a successful solo career that continues to this day. Sonny Bono was elected as a US Congressman for California in 1995. Sadly, he didn’t finish his term in the House as he died from injuries sustained in a skiing accident in 1998.

John Cho is an actor and musician who was born in Seoul, South Korea but who has lived in the US since he was a young boy. Cho’s break in movies came in playing Harold Lee in the ”Harold & Kumar” films. He is now making a name for himself playing Mr. Sulu in the latest “Star Trek” movies.

Elon Musk is successful businessman who has founded or led some very high-profile companies, namely PayPal, Tesla Motors and SpaceX. Musk was born and raised in South Africa, and moved to Canada when he was seventeen years old, and then to the US two years later.

Panera Bread is a chain of bakery/coffeehouses. A Panera restaurant is a good place to get online while having a cup of coffee. Back in 2006 and 2007, Panera was the largest provider of free Wi-Fi access in the whole of the US.

Rap star Eminem’s real name is Marshall Mathers. Mathers grew up poor in Saint Joseph, Missouri. He was raised by a single-mom as the family was abandoned by his father when he was 18 months old. Marshall and his mother moved around the country before settling in a suburb of Detroit. He didn’t do well at school, and dropped out at the age of 17. But in the end he made it pretty big …

Team USA won the gold medal in men’s hockey at the 1980 Winter Olympics in Lake Placid. The victory was a surprising one given the decades-long dominance of the USSR team. The “big result” for the American team was the epic victory against the Soviets, a victory often referred to as the “Miracle on Ice”. The US went on to defeat Finland in the final and secured the gold medal.

38. Popular mobile app … and, as shown by circles, what the inner parts of the answers to starred clues do : SNAPCHAT

“Per capita” is a Latin term used to mean “per person, per unit of population”. The literal translation of the term is “by heads”.

Irish actor Peter O’Toole got his big break in movies when he played the title role in the 1962 epic film “Lawrence of Arabia”. My favorite of O’Toole’s movies is much lighter fare, namely “How to Steal a Million” in which he stars opposite Audrey Hepburn. O’Toole never won an Oscar, but holds the record for the greatest number of Best Actor nominations without a win.

Luxembourg is a relatively small country in the middle of Europe, just 1,000 square miles in area with a population of over half a million. The country is a representative democracy (just like the United Kingdom) and it has a constitutional monarch, namely Henri, Grand Duke of Luxembourg. As such, Luxembourg is the only remaining sovereign Grand Duchy in the world.

62. Article in some hip-hop titles : THA