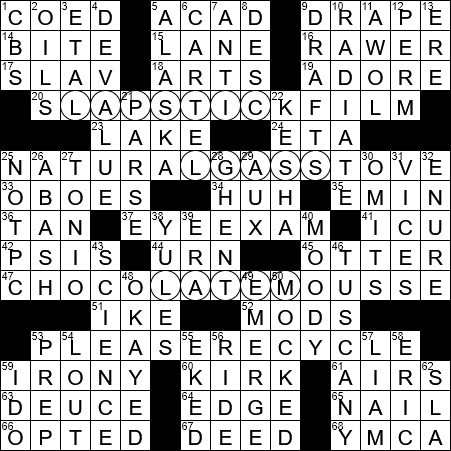 Today’s themed answers contain hidden words, the letters of which have been RECYCLED. Those recycled letters are circled in my grid. Also, the hidden words are three materials that we often recycle, namely PLASTIC, GLASS and METAL:

The term “liberal arts” dates back to classical antiquity. The liberal arts were those subjects deemed essential to master for a citizen to take active part in civil life. “Citizens” were “free people”, hence the use of the term “liberal arts”. The list of subjects studied in olden times were generally sevenfold: grammar, logic, rhetoric, arithmetic, geometry, music and astronomy/astrology.

Slapstick is a physical form of comedy, horseplay. Back in the late 19th century, the term described a device made from two sticks loosely fastened together, which could be “slapped” together to create a sound effect offstage. The sound effect added to the laugh when a clown or actor was given a slap on stage.

The reservoir on the Colorado River known as Lake Mead used to the largest reservoir in the US. Located outside Las Vegas, drought and increasing demand for water has shrunk Lake Mead so that now Lake Sakakawea on the Missouri in North Dakota has a larger surface area and volume of water.

An induction cooktop heats cooking vessels directly, rather than passing heat from a flame or electrical heating element. There is a coil of copper wire under the pot, within the stove, through which passes an alternating current. A ferromagnetic pot placed over the coil then heats up under the effect of the oscillating magnetic field produced by the coil. One of the great advantages of an induction cooktop is that excess heat is not lost from the cooking surface into the kitchen.

A patient might leave an operating room (OR) and head for an intensive care unit (ICU).

Psi is 23rd letter in the Greek alphabet, and the one that looks a bit like a trident or a pitchfork.

“Mod” is short for “modernist”, and describes a subculture that originated in London in the late fifties. Young men who called themselves mods tended to wear tailored suits, listen to pop music and drive around on Italian motor scooters. Mods came into conflict with another subculture that emerged at the same time in the UK called the rockers. Rockers were into rock and roll music, and drove motorcycles I remember as a young kid in school having to declare myself as either a mod or a rocker. I don’t think our “gangs” back then were quite the same as they are today though …

Kurt Vonnegut was an writer from Indianapolis whose most famous work is probably the novel “Slaughterhouse-Five” from 1969. Beyond his writing, Vonnegut was noted for his support of the American Civil Liberties Union and American Humanist Association. Kurt had a brother who made a big contribution to society. Bernard Vonnegut was the atmospheric scientist who discovered that silver iodide could be used to seed clouds and artificially create rain.

According to the storyline in “Star Trek”, Captain James Tiberius Kirk was born in Riverside, Iowa. The town of Riverside displays a plaque, noting Riverside as the “future birthplace of James T. Kirk.”

“Kevin Can Wait” is a sitcom starring comedian Kevin James that premiered in 2016. James plays retired police officer. In season one, he costarred with Erinn Hayes, who played the police officer’s wife. Things didn’t work out between the show’s producers and actress Hayes, so her character was killed between seasons one and two, and a new female lead character was introduced played by Leah Remini. James and Remini had played husband and wife on the very successful sitcom “The King of Queens”.

The initials “G.I.” stand for “Government Issue”, and not “General Infantry” as is often believed. GI was first used in the military to denote equipment made from Galvanized Iron and during WWI, incoming German shells were nicknamed “GI cans”. Soon after, the term GI came to be associated with “Government Issue” and eventually became an adjective to describe anything associated with the Army.

“Pagliacci” (“The Clowns” in English) is an opera by Ruggero Leoncavallo that premiered in 1892 in Milan. Included in the opera is one of the most famous arias of all time, “Vesti la giubba” (“put on the costume”).

Ghent is a city in the Flemish region of Belgium. The War of 1812 (between Britain and the US) was formally concluded with the signing of the Treaty of Ghent In 1814. The American negotiating team in Ghent included Henry Clay and John Quincy Adams.

The musical “La Cage aux Folles” opened on Broadway in 1985. It is a musical adaptation of the French play of the same name by Jean Poiret that was first staged in 1973. I’ve never had the pleasure of seeing the stage play nor the musical, but I love the wonderful movie adaptation called “The Birdcage”, which was released in 1996. The film has a very strong cast that includes Robin Williams, Nathan Lane, Gene Hackman and Hank Azaria.

The Era of Good Feelings lasted from about 1816 to 1824, during the administration of President James Monroe. The term described the feeling of bipartisanship that permeated politics at that time, largely due to President Monroe deliberately downplaying differences between the parties in Washington. One can only dream …

Tuscany is a beautiful region of central Italy, the capital of which is the city of Florence. Tuscany is considered to be the birthplace of the Italian Renaissance, centered around Florence. It was home to great artistic icons such as Dante, Botticelli, Michelangelo, da Vinci, Galileo and Puccini.

If you want to get into a business school’s graduate program then you might have to take the Graduate Management Admission Test (GMAT), which will cost you about $250, I believe …