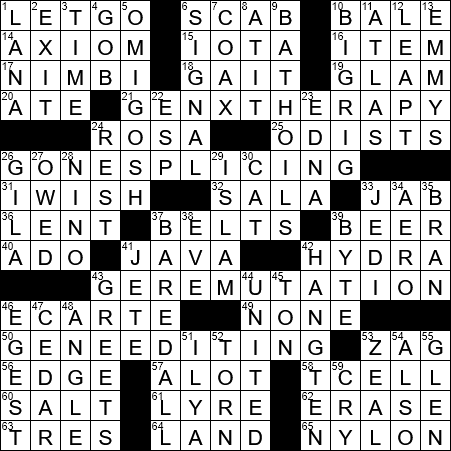 Each of today’s themed answers is a phrase that starts with the word GENE, but GENE has been EDITED; one letter of GENE has been changed:

A nimbus (plural “nimbi”) is a halo, or an aura. “Nimbus” is Latin, and can also translate as “cloud”.

The term Generation X (often shortened to “Gen-X”) originated in the UK where it was the name of a book by Jane Deverson. Her book detailed the results of a study of British youths in 1964, contrasting their lifestyle to those of previous generations. It was Canadian author Douglas Coupland who was responsible for popularizing the term, with his more successful publication “Generation X: Tales for an Accelerated Culture”. By the latest accepted definition, Gen-Xers were born between 1961 and 1981.

Recombinant DNA is DNA made under laboratory conditions. The recombination technique (sometimes referred to as “gene splicing”) brings together genetic material from multiple sources. The sources of that genetic material might be from a different part of the same gene, or even from the gene of a different organism. The end result is a new, man-made, genetic combination.

In Spanish, the term “hacienda” is usually used for a large estate.

Perhaps in the martial arts?

The Lernaean Hydra was a mythical sea snake that had multiple heads. Heracles had to slay the Hydra of Lerna as the second of his Twelve Labors.

Écarté is a card game that comes to us from France, with a name that translates into ‘discarded”. Écarté is similar to whist but is played with a stripped-down deck and involves only two players.

T cells are a group of white blood cells that are essential components of the body’s immune system. T cells are so called because they mature in the thymus, a specialized organ found in the chest.

The lyre is a stringed instrument most closely associated with Ancient Greece, and with the gods Hermes and Apollo in particular. According to myth, Hermes slaughtered a cow from a sacred herd belonging to Apollo and offered it to the gods but kept the entrails. Hermes used the entrails to make strings that he stretched across the shell of a tortoise, creating the first lyre. Apollo liked the sound from the lyre and agreed to accept it as a trade for his herd of cattle.

A kithara (also “cithara”) was a lyre-like instrument in Ancient Greece. Our word “guitar” is ultimately derived from “kithara”. Indeed, “kithara” is the modern Greek word for “guitar”.

Woody Guthrie was a singer-songwriter best known for his recording of the folk song “This Land is Your Land”, the lyrics of which were written by Guthrie himself.

1. Turner of “The Bad and the Beautiful” : LANA

Lana Turner started work as a Hollywood actress at a very young age, signing up with MGM at only sixteen. Early in her career she earned the nickname “The Sweater Girl” after wearing a pretty tight sweater in the film “They Won’t Forget”, which was her film debut. She married eight times, to seven different husbands, the first of which was bandleader Artie Shaw. Shaw and Turner eloped and married on their very first date, when the young actress was just nineteen years old. After divorcing Shaw she married restaurateur Joseph Crane, but had the marriage annulled when she found out that Crane was still married to his first wife. The two had a daughter together, and so remarried when Crane’s divorce was finalized. Cheryl Crane was the daughter from the marriage to Joseph and she lived with Turner after her parents split up. When Cheryl was 14-years-old, her mother was romantically involved with a shady character named Johnny Stompanato. One evening Cheryl found her mother engaged in a violent argument with Stompanato, and Cheryl became so scared that she pulled out a gun and killed him in what was deemed to be justifiable homicide. Turner’s last marriage was to a nightclub hypnotist, Ronald Pellar, and that union lasted just six months as Pellar disappeared one day with a lot of Turner’s money and jewelry. Years later Turner said, “My goal was to have one husband and seven children, but it turned out to be the other way around.”

“The Bad and the Beautiful” is a 1952 film that won five Academy Awards, including Best Supporting Actress for Gloria Grahame. Remarkably, Grahame was on screen for just nine minutes in the movie, so she set a record for the shortest performance to ever win an acting Oscar. That record stood until Beatrice Straight’s Oscar-winning performance in the 1976 film “Network”, a performance that took up 5 minutes and 2 seconds of screen time.

I wish all drivers would use their turn signals. Back in Ireland we don’t call them “turn signals”, but rather “indicators”.

Zener cards were developed in the early thirties by psychologist Karl Zener, for use in experiments related to extra-sensory perception (ESP). These five simple and distinctive cards replaced the standard deck of cards that had been used in trials up to that point. The five symbols used on the cards are a circle, a cross, three wavy lines, a square and a star.

Edna Ferber was a novelist and playwright from Kalamazoo, Michigan. Ferber won a Pulitzer for her novel “So Big”, which was made into a film a few times, most famously in 1953 starring Jane Wyman. Ferber also wrote “Show Boat”, “Cimarron” and “Giant”, all three of which were adapted successfully for the stage and/or big screen.

“Show Boat” is a 1926 novel by Edna Ferber that tells the story of performers on a floating theater, a riverboat named Cotton Blossom. The novel was famously adapted into a stage musical by Jerome Kern and Oscar Hammerstein that premiered in 1927. “Show Boat”, the musical, gave us classic songs such as “Ol’ Man River” and “Can’t Help Lovin’ Dat Man”.

The Yucatán Peninsula is located in southeastern Mexico, where it separates the Gulf of Mexico to the northwest from the Caribbean Sea to the southeast.

The Force is a metaphysical power much cited in all of the “Star Wars” movies. We may even hear someone in real life say “May the Force be with you”.

A “jeté” is a leap in ballet, coming from the French word “jeter” meaning “to throw”. A “jeté en avant” is a “leap to the front”, towards the audience. A “grand jeté” is a long horizontal jump, a split in the air, leaping from one foot to the other.

“To hang ten” is a verb used in surfing. A surfer hangs ten when he or she is able to walk forward and hang ten toes over the nose of the board because the back of the board is covered by the wave being ridden.

Planking is a technique used to roast or bake fish or meat (mainly). While using an open flame, the food items are placed in contact with planks so that natural oils and moisture from the wood can be imparted into the meat or fish. A common wood used for planking is cedar.

Ilya Kovalchuk is a Russian-born hockey player who turns out for the New Jersey Devils of the National Hockey League.