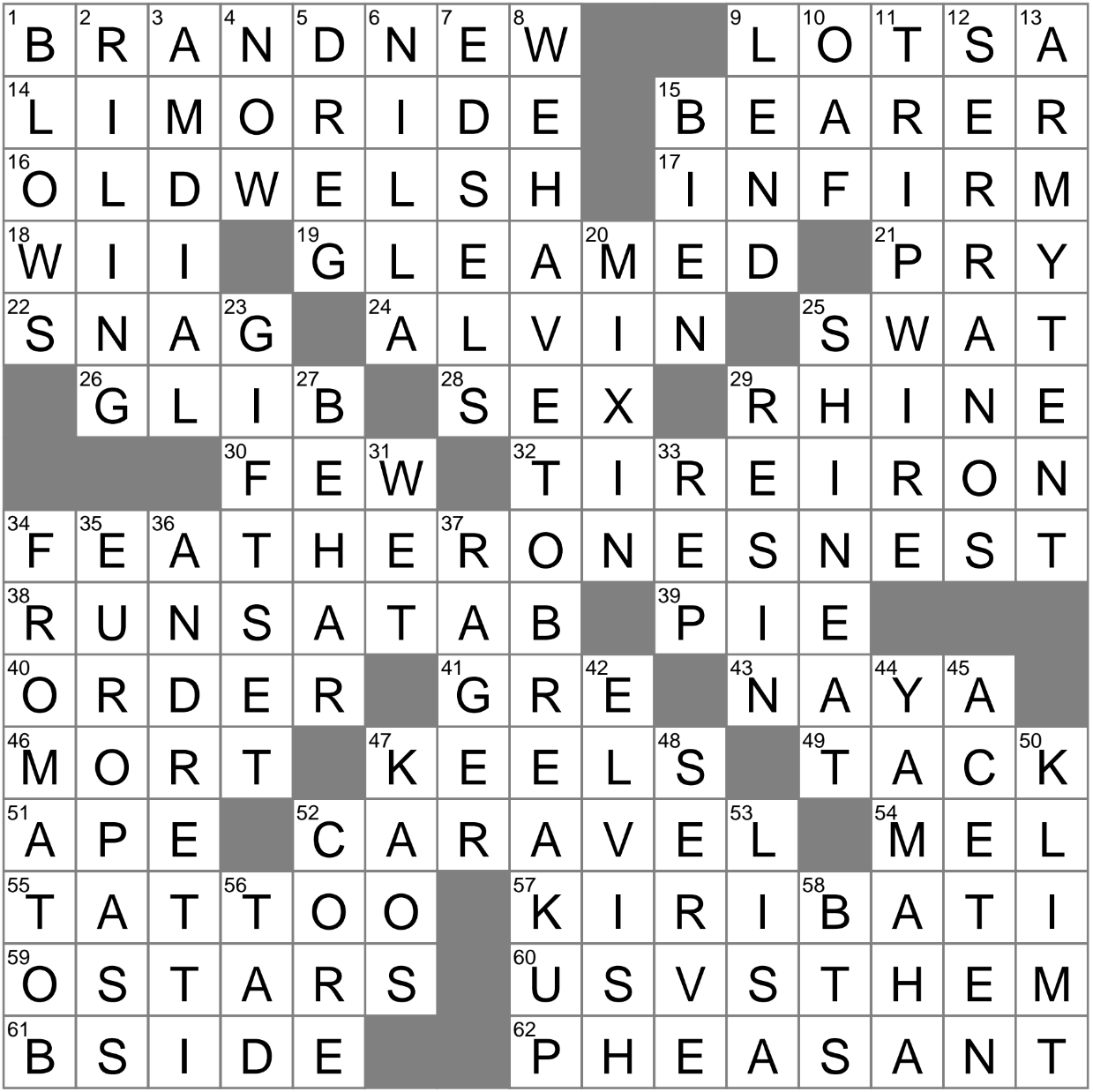 Alvin Ailey was a dancer who formed his own troupe in New York in 1958, naming it “the Alvin Ailey American Dance Theater”. The most famous work that Ailey choreographed was called “Revelations”. President Barack Obama awarded Ailey the Presidential Medal of Freedom posthumously, in 2014.

The Riesling grape variety originated in the Rhine region of Germany, and is used to make wines that are often described as fruity and aromatic. The wine generally has a high level of acidity which makes it ideal for aging, with some examples being proclaimed as excellent at over a hundred-years-old.

You won’t see tire irons in many trunks anymore, as they were tools used in working with tires that had inner tubes. That said, if you have a bicycle you might have a set of tire irons.

The Naya brand of bottled water uses a spring in the Laurentian Mountains in Quebec as its source. Bottled water — don’t get me going …

“Tack” is the term used for equipment used in riding or working horses. Examples of tack are saddles, stirrups, bridles, reins, bits and halters.

The US slang “go ape” is actually a cleaner version of a similar expression, and is American slang that only dates back to about 1955.

A caravel was a ship of Portuguese origin that was small and very maneuverable. Caravels had triangular lateen-rigged sails which allowed them to sail quite close to the wind. Caravels were indeed quite small, only accommodating a crew of twenty or so sailors. Christopher Columbus’ Nina, Pinta and Santa Maria were all caravels.

Kiribati is an island nation in the central Pacific Ocean that gained its independence from the UK in 1979. Under the UK’s rule, the archipelago was known as the Gilbert Islands, named for British mariner Thomas Gilbert. Gilbert was captaining one of two vessels that sailed through the island chain in 1788, after transporting convicts to Australia.

The part of the Pacific Ocean known as “Oceania” is roughly equivalent to the tropical islands of the South Pacific. Oceania can be divided into the regions of Polynesia, Melanesia and Micronesia.

That would be the B-side of a record.

11 Security element that may be detected by Silly String : TRIP WIRE

Silly String is a brand of aerosol string. The “string” exits the aerosol can as a liquid, with the solvent evaporating rapidly in mid-air resulting in a continuous strand. Aerosol string is used as a toy, an application that really annoys me (I’m an old grouch!). However, the military has a use for the product, spraying it over areas where tripwires are suspected. The string falls to the ground if none are present, but gets caught on tripwires that are present without activating any explosive.

12 Peppers between jalapeño and tabasco on the Scoville scale : SERRANOS

The serrano chili pepper is native to the mountainous regions of the Mexican states of Puebla and Hidalgo. The name “serrano” comes from the Spanish “sierra” meaning “mountain”.

Joy Behar is a comedian, and former co-host of the hit talk show “The View”. Behar was one of the original co-hosts of “The View”, and stayed with the show from 1997 until 2013, and then rejoined the show in 2015. She briefly hosted her own talk show called “Late Night Joy” in November 2015.

The balm of the Gilead tree is also known as the balsam poplar. The tree’s resin is extracted for use in cough syrups and as a first-aid salve.

Cori Bush became a member of the US House of Representatives in 2021. A Democrat from St. Louis, Missouri, Bush joined the group of progressive lawmakers known as “The Squad”.

In my days as a student, the way to backpack around Europe was using a Europass. Nowadays that is known as a Eurail pass. The Eurail pass gives you access to most trains (and some shipping lines) right across the continent.

42 Quenya or Sindarin, in fiction : ELVISH

The Japanese company Yamaha started out way back in 1888 as a manufacturer of pianos and reed organs. Even though the company has diversified since then, Yamaha’s logo still reflects its musical roots. Said logo is made up of three intersecting tuning forks, and can even be seen on Yamaha motorcycles and ATVs.

“Snow Flower and the Secret Fan” is a 2005 novel set in 19th-century China, and penned by American author Lisa See. The book takes the form of an 80-year-old woman named Lily telling the story of her long life.

“Mic Drop” is a 2017 song by the boy band BTS from South Korea. They released two versions of the song simultaneously, one in Korean and one in Japanese.