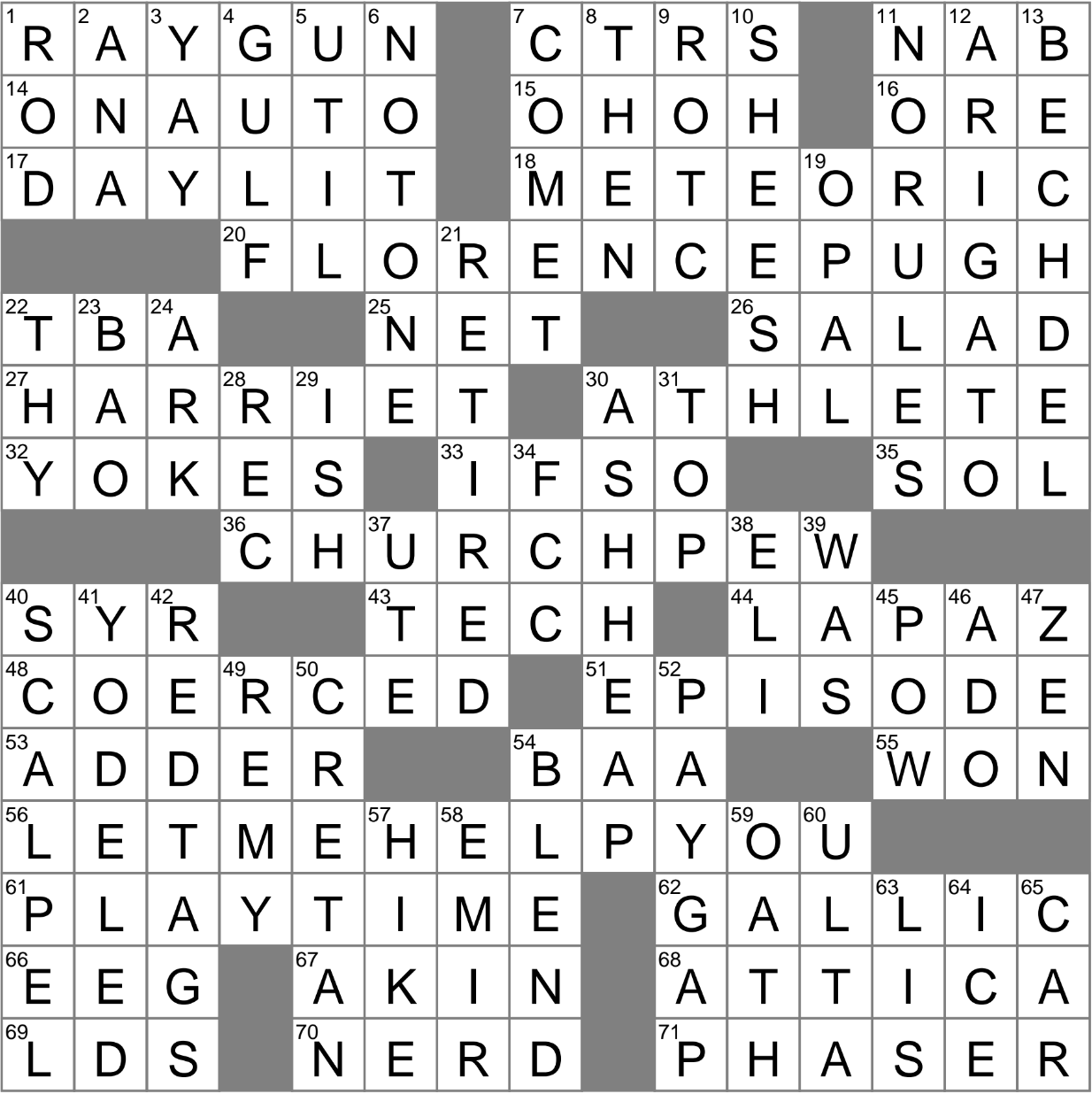 Themed answers each end with the sound made by a RAY GUN or PHASER:

The use of “phenom” for “phenomenon” originated as baseball slang, back in the 19th century.

Florence Pugh is an English actress whom I best know from playing Amy March in the 2019 big-screen adaption of the novel “Little Women”. Younger members of the viewing audience might recognize her for playing Yelena Belova in the film “Black Widow” and the related TV series “Hawkeye”. In 2019, Pugh started a relationship with fellow actor Zach Braff (who played the lead in “Scrubs”).

The Altiplano (“high plain”, in Spanish) of South America is also known as the Andean Plateau. It is located in the Central Andes, and has an average height of around 12,300 feet. The Altiplano is home to the Bolivian capital La Paz as well as Lake Titicaca, which is often referred to as the highest navigable lake in the world.

I’m a big fan of binge-watching, the practice of watching perhaps two or three (even four!) episodes of a show in a row. My wife and I will often deliberately avoid watching a recommended show live, and instead wait until the whole series has been released online. I’m not a big fan of “tune in next week …”

The word “fold” describes an enclosure for sheep, and is also an alternative name for a flock, a group of sheep. Both “flock” and “fold” are used figuratively to describe a church’s congregation.

71 Sci-fi weapon that makes the sounds heard at the ends of the answers to the starred clues : PHASER

A MASER is a device that was around long before LASERs came into the public consciousness. A MASER (Microwave Amplification by Stimulated Emission of Radiation) is similar to a LASER, but microwaves are emitted rather than light waves. When the storyline for “Star Trek” was being developed, the writers introduced a weapon called a “phaser”, with the name “phaser” derived from PHoton mASER.

“Blonde” is a 2022 biographical film about Marilyn Monroe. It is a fictionalized account of the actress’ life, and is based on Joyce Carol Oates’ 2000 novel of the same name. Monroe is played by Ana de Armas.

13 Alison who wrote the graphic memoir “The Secret to Superhuman Strength” : BECHDEL

American cartoonist Alison Bechdel introduced what’s now known as the Bechdel test in 1985. The test is used to highlight gender inequality in works of fiction. To pass the test, a work must feature at least two female characters who talk to each other about something other than a boy or a man. Apparently, only half of all movies made meet this criterion.

The constellation of Libra is the seventh sign of the zodiac, and is named for the scales held by the goddess of justice. Libra is the only sign that isn’t named for a living creature.

A baozi (also “bou, bao”) is a steamed, filled bun in Chinese cuisine.

“Parks and Recreation” (sometimes just “Parks and Rec”) is a sitcom that started airing on NBC in 2009, and is a show that has grown on me. It stars the “Saturday Night Live” alum Amy Poehler. The creators of “Parks and Recreation” are part of the team responsible for the American version of “The Office”, so you’ll notice some similarities in the style of the two shows, and some actors that have appeared in both.

“The ash heap of history” is a phrase used to refer to artifacts or locations that have lost their relevance over time.

Eli Wallach appeared consistently and made great performances on the big and small screens from the 1950s onwards. Wallach’s most famous role was probably “the Ugly” in “The Good, the Bad and the Ugly”. More recently he gave a very strong performance in 2006’s “The Holiday”. Sadly, Wallach passed away in June 2014, at the age of 98.