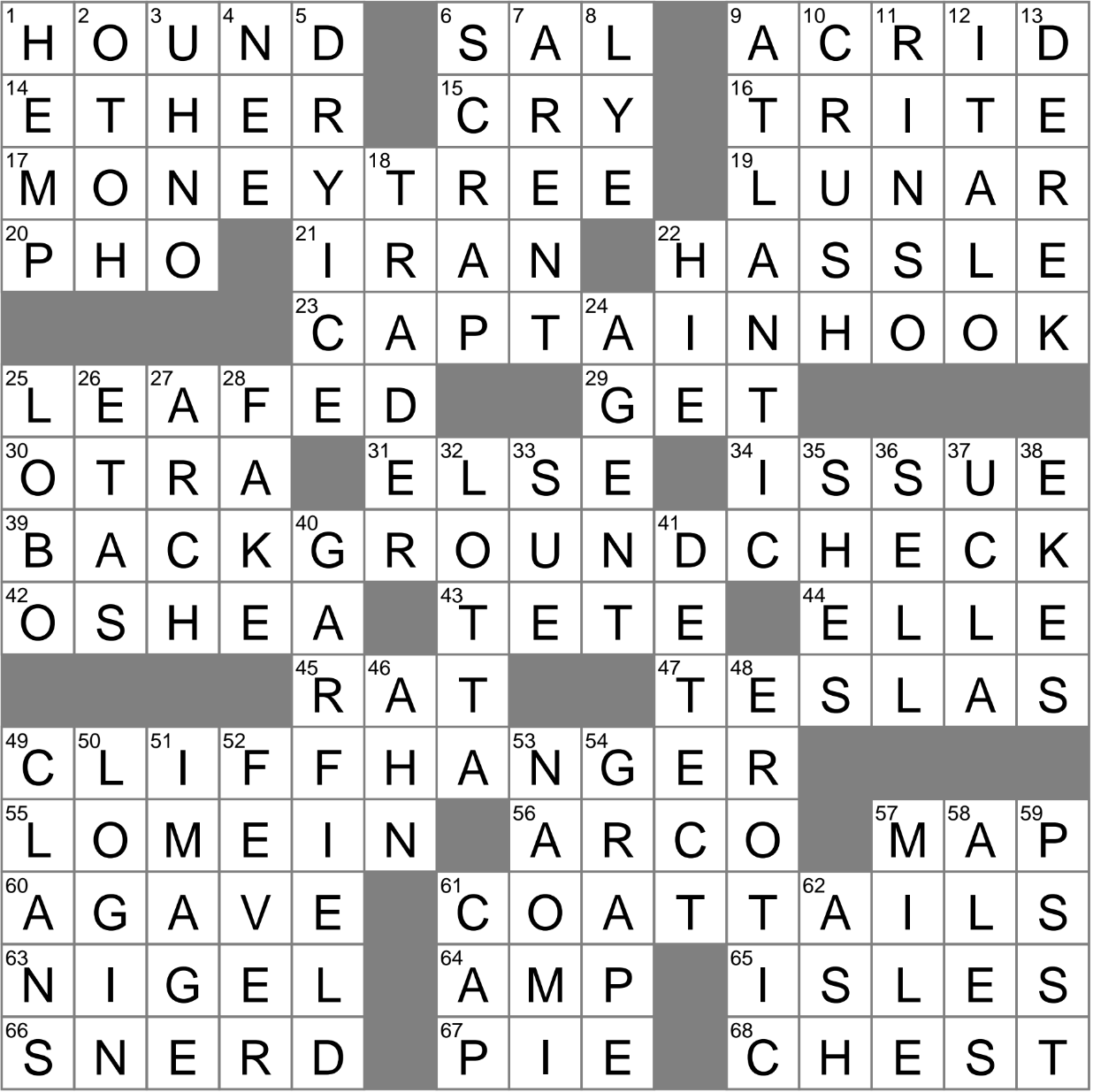 Themed answers each end with a word that often follows (“TAILS”) the word “COAT”:

Disney’s 1981 animated feature “The Fox and the Hound” is based on a novel of the same name by Daniel P. Mannix. Both the novel and movie tell the tale of a young fox (Tod) and a young hound (Copper) who are good friends. The fox and hound struggle to maintain their friendship as they grow older, even as their animal instincts kick in and social pressures demand that they become adversaries. Heavy stuff!

Captain Hook is the bad guy in “Peter Pan”, the famous play by J. M. Barrie. Hook is Peter Pan’s sworn enemy, as Pan had cut off Hook’s hand causing it to be replaced by a “hook”. It is implied in the play that Hook attended Eton College, just outside London. Hook’s last words are “Floreat Etona”, which is Eton College’s motto. Barrie openly acknowledged that the Hook character is based on Herman Melville’s Captain Ahab from the novel “Moby Dick”.

The character Nigel Tufnel is the lead guitarist in the fictional rock band in the 1984 movie “This Spinal Tap”. He is played by actor Christopher Guest. Famously, the amplifier for Tufnel’s guitar has a volume dial that goes up to 11, rather than the usual 10. To honor this fact, fans of the movie celebrated Nigel Tufnel Day in 2011, on the 11th of November (11/11/11).

4 Word before a maiden name : NEE

Dry ice is the solid form of carbon dioxide (CO2). The material’s main use is to preserve food and for cooling in general. It is also used in fog machines in theaters and haunted houses.

Atlantic City, New Jersey was developed in the 1850s as a potential resort town. The first version of the celebrated Atlantic City Boardwalk was installed in 1870. The city’s heyday came with Prohibition, when illegal drinking and gambling thrived in the backrooms of nightclubs and restaurants. After a long period of decline, Atlantic City was revitalized with the introduction of legalized casino gambling in 1976.

Rinso was a laundry detergent that was first manufactured in England in 1908 by a company called Hudson’s Soap. It was introduced into the US in 1918. In America, Rinso took to radio advertising and sponsorship in the days of “soap operas”. Their most famous program association was with “The Amos ‘n’ Andy Show” in the 1940s. One of the brand’s slogans was “Solium, the sunlight ingredient”. I have no idea what Solium is, but it certainly did sell a lot of soap!

25 Rebecca in the Basketball Hall of Fame : LOBO

Rebecca Lobo is a former WNBA basketball player who launched a second career as a sports reporter and analyst for ESPN. Lobo played with the New York Liberty, Houston Comets and Connecticut Sun.

Sue Grafton wrote detective novels, and her “alphabet series” features the private investigator Kinsey Millhone. She started off with “’A’ Is for Alibi” in 1982 and worked her way up to “‘Y’ is for Yesterday” before she passed away in 2017.

Tom Jones … someone with a real voice and a great showman. I saw him in Las Vegas many, many moons ago, and it was one of the best Vegas shows I’ve ever attended. Although “Tom Jones” is a carefully selected stage name (he was born Thomas Woodward) the name isn’t too far from reality as Jones is his mother’s maiden name. The stage name was chosen by his manager to capitalize on the appeal of “Tom Jones”, a filmed version of the Henry Fielding novel that was having a successful run at the time. The name also emphasized Tom’s Welsh roots, as Jones is a very common name in Wales.

“Garfield” is a comic strip drawn by Jim Davis from 1978. The title character is an orange tabby cat. Davis named his cartoon hero Garfield after his own grandfather.

Actress Naomi Watts was born in the UK and moved to Australia when she was 14 years of age. It was in Australia that Watts got her break in television and movies. Probably her most acclaimed role was in the 2003 film “21 Grams” with Sean Penn and Benicio del Toro. Watts is best friends with fellow Australian actress Nicole Kidman.

Humans have been cultivating grapes as a foodstuff for 6,000 to 8,000 years. They were first cultivated in the Middle East. The surface of grape skins are a natural home for yeasts, and it was this coexistence of yeast and grapes that led to the discovery of the alcoholic drink we refer to as wine.