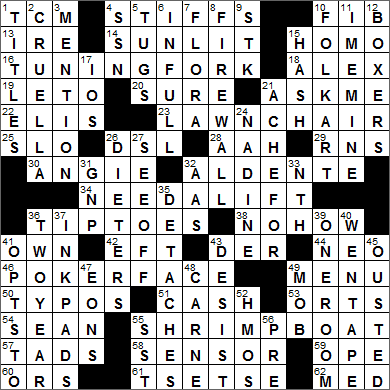 CROSSWORD SETTER: Greg Johnson
THEME: Need a Lift … each of today’s themed answers ends with a type of LIFT:

4. Doesn’t leave a gratuity STIFFS
The etymology of our verb “to stiff”, meaning “to fail to tip”, seems unclear. The usage originated in the late 1930s, and is possibly an extension of the noun “stiff” meaning “corpse”. The idea is that dead men don’t leave tips.

10. Little untruth FIB
To “fib” is to “to tell a lie”. The term likely comes from “fibble-fable” meaning “nonsense”, itself derived from “fable”.

14. Like an atrium SUNLIT
In modern architecture an atrium (plural “atria” or “atriums”) is a large open space usually in the center of a building and extending upwards to the roof. The original atrium was an open court in the center of an Ancient Roman house. One could access most of the enclosed rooms of the house from the atrium.

15. __ sapiens HOMO
The literal translation of “Homo sapiens” from Latin is “wise or knowing man”. The Homo genus includes the species Homo sapiens (modern humans), but we’re the only species left in that genus. The last known species related to humans was Homo neanderthalensis (Neanderthal Man) which died off about 24,000 years ago. However, another species was discovered in Indonesia in 2003 that has been dubbed Homo floresiensis (Flores Man … sometimes called “hobbit”), and it may possibly have lived as recently as 12,000 years ago. Watch this space …

18. Trebek with all the answers ALEX
The word is that Alex Trebek will step down as host of the game show “Jeopardy” in 2016, when his current contract expires. The list of names mentioned to replace Trebek includes Brian Williams, Dan Patrick, Matt Lauer and Anderson Cooper. I vote for Cooper, but I can’t see him taking the job …

19. “Dallas Buyers Club” Oscar winner Jared LETO
Jared Leto is an actor and musician. In the world of music, Leto is the lead singer and rhythm guitarist for the rock band 30 Seconds to Mars. In the film world his most critically acclaimed role was that of a heroin addict in “Requiem for a Dream”. He also appeared in “American Psycho”, “Panic Room” and “Lord of War”.

“Dallas Buyers Club” is a 2013 film that tells the real-life story of AIDS patient Ron Woodruff. Woodruff smuggled unapproved AIDS drugs across the US border into Texas in opposition to the Food and Drug Administration (FDA). The movie won the Best Actor Oscar for Matthew McConaughey and Best Supporting Actor for Jared Leto.

22. New Haven collegians ELIS
Eli is the nickname for a graduate of Yale University, a term used in honor of the Yale benefactor Elihu Yale.

26. Internet access letters DSL
The abbreviation “DSL” originally stood for Digital Subscriber Loop, but is now accepted to mean (Asymmetric) Digital Subscriber Line. DSL is the technology that allows Internet service be delivered down the same telephone line as voice service, by separating the two into different frequency signals.

30. Eponymous Hicks with an online list ANGIE
Angie’s List is a website used by consumers to rate and research local businesses. The “list” was founded in 1995, originally as a call-in service and publication with reviews, by William S. Oesterle and the eponymous Angie Hicks. Angie’s List moved to the Internet in 1996, and by 2013 had 70,000 subscribers.

32. Pasta specification AL DENTE
The Italian expression “al dente” literally means “to the tooth” or “to the bite” and is used to describe not only pasta, but also vegetables that are cooked so that they are tender yet still crisp.

42. Baby newt EFT
Newts wouldn’t be my favorite animals. They are found all over the world living on land or in water depending on the species, but always associated with water even if it is only for breeding. Newts metamorphose through three distinct developmental stages during their lives. They start off as larvae in water, fertilized eggs that often cling to aquatic plants. The eggs hatch into tadpoles, the first developmental form of the newt. After living some months as tadpoles swimming around in the water, they undergo another metamorphosis, sprouting legs and replacing their external gills with lungs. At this juvenile stage they are known as efts, and leave the water to live on land. A more gradual transition takes place then, as the eft takes on the lizard-like appearance of the adult newt.

43. Berlin article DER
“Der”, “die” and “das” are German words meaning “the”. “Der” is used with a masculine noun, “die” with a feminine noun and “das” with a neuter noun.

44. Prefix with conservative NEO-
By definition, a neoconservative supports the use of American power and military to bring democracy, liberty, equality and human rights to other countries.

55. Bubba Gump company vessel SHRIMP BOAT (giving “boatlift”)
“Boatlift” is a derivative from “airlift”, and describes an operation in which large numbers of people or large quantities of supplies are transported by a flotilla of boats to provide emergency relief.

57. Little boys TADS
Back in the 1800s “tad” was used to describe a young child, and this morphed into our usage of “small amount” in the early 1900s. The original use of “tad” for a child is very likely a shortened version of “tadpole”.

61. Botswana biter TSETSE
Tsetse flies live on the blood of vertebrate mammals. The name “tsetse” comes from Tswana, a language of southern Africa, and translates simply as “fly”. Tsetse flies are famous for being carriers of the disease known as “sleeping sickness”. Sleeping sickness is caused by a parasite which is passed onto humans when the tsetse fly bites into human skin tissue. If one considers all the diseases transmitted by the insect, then the tsetse fly is responsible for a staggering quarter of a million deaths each year.

Down
1. Names on spines TITLES
In the US, the convention is to write the title on the spine of a book from top-to-bottom. In most of Europe, the convention is to write the title from bottom-to-top. We have a lot of books in the “library” in our house from both sides of the Atlantic, and so there is much moving of the head from left to right as we glance along our bookshelves.

2. “101 Dalmatians” villain de Vil CRUELLA
Cruella de Vil is the villain in the 1956 novel “The Hundred and One Dalmatians” written by Dodie Smith. Most famously perhaps, Cruella was played so ably by Glenn Close in the Disney movie adaption “101 Dalmatians”, released in 1996.

4. Confidential personal ID SSN
The main purpose of a Social Security Number (SSN) is to track individuals for the purposes of taxation, although given its ubiquitous use, it is looking more and more like an “identity number” to me. The social security number system was introduced in 1936. Prior to 1986, an SSN was required only for persons with substantial income so many children under 14 had no number assigned. For some years the IRS had a concern that a lot of people were claiming children on their tax returns who did not actually exist. So, from 1986 onward, it is a requirement to get an SSN for any dependents over the age of 5. Sure enough, in 1987 seven million dependents “disappeared”.

11. Harrison song on the Beatles’ “Let It Be” album I ME MINE
“I Me Mine” is one of the relatively few Beatles songs to have been written by George Harrison (and indeed performed by him). Harrison chose the same title for his autobiography, published in 1980 just a few weeks before John Lennon was assassinated in New York City.

12. Stocky dogs BOXERS
The boxer breed of dog (one of my favorites!) originated in Germany. My first dog was a boxer/Labrador mix, a beautiful animal. Our current family dog is a boxer/pug mix, another gorgeous creature.

15. Corned beef dish HASH
“Hash”, meaning a dish of beef and vegetables mashed together, is a very American term and one that really surprised me when I first came across it. “Hash” just seems like such an unappetizing item, but I soon found out how delicious it was. The name “hash” in this context comes from the French “hacher” meaning “to chop”. Back in the early 1900s the dish called “hashed browned potatoes” was developed, which quickly morphed into “hash browns”. From there the likes of corned beef hash was introduced.

17. Aegean island IOS
The Cyclades are a group of islands in the Aegean Sea lying southeast of the Greek mainland. There are about 200 islands in the group, almost all of which are the peaks of a submerged mountain range. Ios is one of the larger islands, 11 miles long and 6 miles wide.

24. Literature Nobelist Gordimer NADINE
Nadine Gordimer is an author and political activist from South Africa. Gordimer’s writing was recognized in 1991 when she was awarded the Nobel Prize in Literature. One of the main focuses of her works is the apartheid that was once part of South African culture and law.

31. Econ. measure GNP
A country’s Gross National Product (GNP) is the value of all services and products produced by its residents in a particular year. GNP includes all production wherever it is in the world, as long as the business is owned by residents of the country concerned. Gross Domestic Product (GDP) is different, although related, and is the value of all services and goods produced within the borders of the country for that year.

48. Chili con __ CARNE
The full name of the dish that is often called simply “chili” is “chili con carne”, Spanish for “peppers with meat”. The dish was first created by immigrants from the Spanish Canary Islands in the city of San Antonio, Texas (a city which the islanders founded). The San Antonio Chili Stand was a popular attraction at the 1893 Chicago World’s Fair, and that stand introduced the dish to the rest of America and to the world.

55. Bygone jet, briefly SST
The most famous supersonic transport (SST) is the retired Concorde. Famously, the Concorde routinely broke the sound barrier, and cruised at about twice the speed of sound. Above Mach 2, frictional heat would cause the plane’s aluminum airframe to soften, so airspeed was limited.