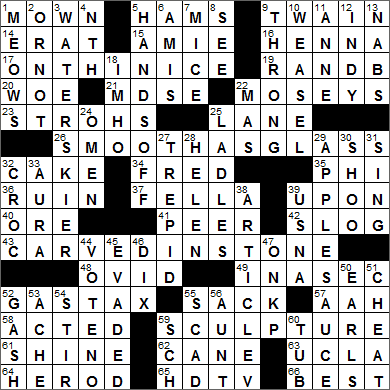 CROSSWORD SETTER: Brock Wilson
THEME: Sculpture Media … each of today’s themed answers ends with a material that may be used for a SCULPTURE:

17A. In a precarious situation ON THIN ICE
26A. Like a lake during a dead calm SMOOTH AS GLASS
43A. Permanent CARVED IN STONE

Today’s Wiki-est, Amazonian Googlies
Across
5. Stage showoffs HAMS
The word “ham”, describing a performer who overacts, is apparently a shortened form of “hamfatter” and dates back to the late 1800s. “Hamfatter” comes from a song in old minstrel shows called “The Ham-Fat Man”. It seems that a poorly performing actor was deemed to have the “acting” qualities of a minstrel made up in blackface.

14. The “E” in Q.E.D. ERAT
QED is used at the end of a mathematical proof or a philosophical argument. The QED abbreviation stands for the Latin “quod erat demonstrandum” meaning “that which was to be demonstrated”.

15. Parisian gal pal AMIE
A male friend in France is “un ami”, and a female friend is “une amie”.

16. Salon dye HENNA
Henna has been used for centuries as a dye, not just for leather and wool, but also for the hair and skin. In modern days, henna is also used for temporary tattoos.

19. Fats Domino genre, briefly R AND B
Antoine “Fats” Domino was born and raised in New Orleans, with Creole as his first language. He made into the big time in 1949 when he recorded an early rock and roll record called “The Fat Man”. That record sold over a million copies, the first rock and roll record to achieve that milestone.

23. Pabst brand STROH’S
Bernard Stroh was the son of a German brewer. Stroh immigrated to the US in 1848 and set up his own brewery in 1850 in Detroit. Years later, the Stroh Brewing Company introduced a European process called fire-brewing. This results in higher temperatures at a crucial stage in the brewing process, supposedly bringing out flavor. Stroh’s is the only American beer that still uses this process. By the way, even though the American Stroh’s brewery was set up in 1850, the label bears the words “since 1775”. This is a reference to the date that the Stroh family started brewing back in Germany.

35. __ Beta Kappa PHI
Phi Beta Kappa was the first collegiate Greek fraternity in the US, founded in 1776 at the College of William and Mary. The organization served as a model for future collegiate fraternities and sororities, although in the 19th century Phi Beta Kappa distanced itself from the fraternal focus and transformed into the honor society that it is today, recognizing academic excellence. The initials Phi Beta Kappa stand for “philosophia biou kybernētēs”, which translates into “philosophy is the guide of life”. The symbol of the Phi Beta Kappa Society is a golden key.

37. Dude FELLA
Our term “dude” arose as slang in New York City in the 1880s, when it was used to describe a fastidious man. In the early 1900s, the term was extended to mean “city slickers”, Easterners who vacationed in the West. The first use of the term “dude ranch” was recorded in 1921.

48. Exiled Roman poet OVID
The Roman poet Publius Ovidius Naso is today known simply as Ovid. Ovid is usually listed alongside the two other great Roman poets: Horace and Virgil. Ovid was very popular in his day, but somehow he fell foul of Emperor Augustus. For a reason unknown today, Augustus banished Ovid to Tomis, an island in the Black Sea. He lived there for about ten years, until he died.

62. Mr. Peanut’s stick CANE
Planters is the company with the Mr. Peanut icon. Mr. Peanut was the invention of a first-grader named Antonio Gentile, a young man who won a design contest in 1916. A remarkable achievement, I’d say …

63. Pac-12 member UCLA
The UCLA Bruins mascots are Joe and Josephine Bruin, characters that have evolved over the years. There used to be “mean” Bruin mascots but they weren’t very popular with the fans, so now there are only “happy” Bruin mascots at the games.

64. “The Great” king of Judea HEROD
Herod the Great was made king of the Roman province of Judea (now the southern part of Israel). Herod the Great’s son was Herod Antipas, the Herod who appears in the New Testament in the stories of the execution of Jesus of Nazareth and John the Baptist.

6. “London Fields” author Martin AMIS
I suppose the successful English novelist Martin Amis must have writing in his blood. He is the son of the respected author Kingsley Amis, a Booker Prize winner. Amis’s best-known novels are his so-called “London Trilogy” consisting of “Money” (1984), “London Fields” (1989) and “The Information” (1995).

10. “Pop goes” critter WEASEL
“Pop! Goes the Weasel” is an English nursery rhyme, and a relatively young one that probably dates back only to the mid-1800s. No one really knows for certain the significance of the “pop” and the “weasel”.

11. Novelist Brontë ANNE
Anne was the youngest of the three sisters in the literary Brontë family. Her older sisters wrote novels that are more recognized, but Anne’s two novels do have a following. “Agnes Grey” is based on her own experiences working as a governess. Her other novel, “The Tenant of Wildfell Hall” is written as a long letter from a young man describing the events leading up to his first meeting with his wife-to-be. Anne Brontë’s writing career was cut short in 1849, when she died of pulmonary tuberculosis, at only 29 years of age.

12. “500” race, familiarly INDY
The first Indy 500 race was held on Memorial Day in 1911. The winner that day was one Ray Harroun. Harroun had seen someone using a rear view mirror on a horse-drawn vehicle, and decided to fit one on his Marmon “Wasp” motor car. Supposedly that was the first ever use of a rear-view mirror on a motor vehicle.

22. Live __: Taco Bell slogan MAS
Taco Bell was founded by a former US Marine, 25-year-old Glen Bell. His first restaurant was Bell’s Drive-In, located in Southern California. After opening that first establishment, Bell bought up some more restaurants including four named El Taco. He sold off the El Taco restaurants but used the name in part when he opened his first Taco Bell in 1962. Bell sold then sold franchises, with the 100th Taco Bell opening in 1967. The ex-Marine sold off the whole chain to PepsiCo in 1978, and I am guessing he made a pretty penny. Taco Bell has been using the “Live Más” slogan since 2012, with “más” being the Spanish word for “more”.

28. Her face launched a thousand ships HELEN
According to Greek mythology, Helen was the daughter of Zeus and Leda. When Helen reached the age of marriage, she had many suitors as she was considered the most beautiful woman in the world. Menelaus was chosen as her husband, and he took her back to his home of Sparta. Paris, a Trojan prince, seduced Helen, as she eloped with him and travelled to Troy. This event sparked the Trojan War that waged between the city of Troy and Greece. Because of this war, Helen was said to have “the face that launched a thousand ships”. And because of this phrase, it has been suggested, probably by author Isaac Asimov, that the amount of beauty needed launch a single ship is one “millihelen”.

32. Gator’s kin CROC
Crocodiles and alligators bear a resemblance to each other, although they belong to distinct biological families. One of the main ways used to distinguish them is by their teeth and jaws. Both the upper and lower sets of teeth of a crocodile are visible when its mouth is closed, whereas only the upper teeth of an alligator are visible with the mouth shut.

38. Section describing the United States Constitution’s amendment process ARTICLE V
Article V of the US Constitution defines the process for altering the document. An amendment to the constitution takes places in two steps. The first step is a proposal to amend the Constitution, usually by a two-thirds supermajority in both the House of Representatives and the Senate. The second step is ratification, which usually requires a supporting vote by three-quarters of the state legislatures.

39. Annapolis inst. USNA
The United States Naval Academy (USNA) is located in Annapolis, Maryland. The USNA was founded in 1845 and educates officers for both the US Navy and the US Marine Corps. The motto of the USNA is “Ex Scientia Tridens”, which translates as “From Knowledge, Sea Power”.

46. New Jersey fort DIX
Fort Dix is the name commonly used for what is now more correctly called Joint Base McGuire -Dix-Lakehurst, a US Army base located near Trenton, New Jersey. Fort Dix was established in 1917 by the Army, and was consolidated with nearby Air Force and Navy facilities in 2009.

47. Like a GI scraping plates ON KP
KP is a US military slang term that stands for either “kitchen police” or “kitchen patrol”.

50. Viscounts’ superiors EARLS
In the ranking of nobles, an earl comes above a viscount and below a marquess. The rank of earl is used in the British peerage system and is equivalent to the rank of count in other countries. Other British ranks have female forms (e.g. marquess and marchioness, viscount and viscountess), but there isn’t a female word for the rank of earl. A female given the same rank as an earl is known simply as a countess.

55. Large amount SCAD
The origin of the word “scads”, meaning “lots and lots”, is unclear, although back in the mid-1800s “scads” was used to mean “dollars”.

56. Marie, to Donny’s sons AUNT
The former teen idol Donny Osmond was of course a member of the Osmond Brothers singing group that appeared for years on the “The Andy Williams Show”. At the height of his solo career, Donny teamed up with his younger sister Marie Osmond in their own variety show called “Donny & Marie”. The pair have been working together ever since and have been appearing at the MGM Grand in Las Vegas since 2008.