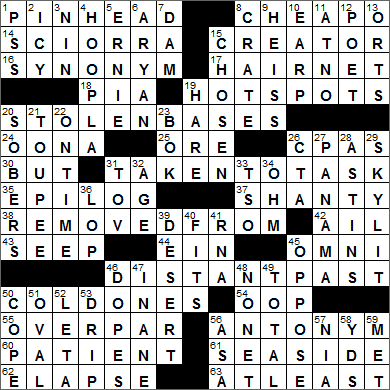 19A. *Popular clubs HOTSPOTS
20A. *Ty Cobb specialties STOLEN BASES
31A. *Dressed down TAKEN TO TASK
38A. *Didn’t allow to remain in, as political office REMOVED FROM
46A. *It’s ancient history DISTANT PAST
50A. *They might be knocked down in a bar COLD ONES

Today’s Wiki-est, Amazonian Googlies
Across
14. Annabella of “Jungle Fever” SCIORRA
The actress Annabella Sciorra played Tony Soprano’s lover on HBO’s “The Sopranos”. I also remember Sciorra as the tormented mother in “The Hand That Rocks the Cradle”.

The 1991 film “Jungle Fever” is a Spike Lee project. Set in New York City, it is a romantic drama about an extramarital, interracial relationship between an architect (played by Wesley Snipes) and his secretary (played by Annabella Sciorra).

17. Equestrian’s head cover HAIR NET
I did not know this until now. Apparently equestrians with long hiar routinely hold their tresses in place using a heavy-duty hair net under a helmet.

18. Newscaster Lindström PIA
Pia Lindström is a retired television journalist who was born in Sweden, but who lived most of her life in the US. Lindström is the oldest child of actress Ingrid Bergman.

20. *Ty Cobb specialties STOLEN BASES
Ty Cobb was one of the richest baseball players of all times. When he retired, Cobb was a major stockholder of the Coca-Cola Corporation. By the time he passed away in 1961, Cobb had an even bigger investment in General Electric. He left an estate after his death worth about $86m (in 2008 dollars).

24. The last Mrs. Chaplin OONA
Oona Chaplin is an actress from Madrid in Spain. Chaplin is getting a lot of airtime these days as she plays Talisa Maegyr on HBO’s hit fantasy series “Game of Thrones”. Oona is the granddaughter of Charlie Chaplin, and is named for her maternal grandmother Oona O’Neill. the daughter of playwright Eugene O’Neill.

30. Save BUT
For example, my day would have been boring but for this crossword, save for this puzzle.

31. *Dressed down TAKEN TO TASK
To give someone a “dressing down” is to give a reprimand, a scolding. One suggestion is that the phrase has nautical roots. Sails that had become old and dry were “dressed down” to make them more useful. They were taken down and dressed with oil and wax so that they performed better in the wind. Similarly, a sailor might be given a figurative dressing down in order to improve his effectiveness.

35. Closing words EPILOG
Our word “epilog”, meaning an addition at the end of a play or other literary work, ultimately comes from Greek. “Epi-” is a prefix signifying “in addition”, and “logos” is the noun for “a speech”.

37. Hut SHANTY
Our word “shanty” is used for a rough cabin. It comes from the Canadian French word “chantier”, which is a “lumberjack’s headquarters”.

Form W-2 is provided by US employers to their employees by January 31 each year. The form reports wages paid to the employees and taxes withheld from them.

45. Magazine that published advance excerpts from Stephen King’s “Firestarter” OMNI
I used to enjoy reading the science magazine “OMNI”, a very entertaining yet interesting read. It was founded in 1978 by Kathy Keeton, wife of Bob Guccione the publisher of “Penthouse”. The print magazine folded in 1995, and a web version continued for a few years, until Keeton passed away in 1998.

Stephen King’s novel “Firestarter” was adapted into a movie of the same name in 1984 starring Drew Barrymore.

54. Hamlin’s caveman OOP
“Alley Oop” is a comic strip that ran for four decades starting in 1932. “Alley Oop” was drawn by V. T. Hamlin. The title character lived in the prehistoric kingdom of Moo, although for much of the strip’s life, Alley Oop had access to a time machine. Alley Oop also had a girlfriend called Ooola. I had assumed that Ooola’s name was a play on “hula hoop”, but that wasn’t invented until the 1950s (a kind blog reader informs me) …

55. Like bogeys OVER PAR
The term “Bogey” originated at the Great Yarmouth Golf Club in England in 1890, and was used to indicate a total round that was one-over-par (and not one-over-par on a particular hole, as it is today). The name Bogey came from a music hall song of the time “Here Comes the Bogey Man”. In the following years it became popular for players trying to stay at par to be “playing against Colonel Bogey”. Then, during WWI, the marching tune “Colonel Bogey” was written and named after the golfing term. If you don’t recognize the name of the tune, it’s the one that’s whistled by the soldiers marching in the great movie “The Bridge on the River Kwai”.

Down
1. Some email enders PSS
One adds a PS (post scriptum, or simply “postscript”) at the end of a letter (ltr.). A second postscript is a post post scriptum, a PPS.

3. Writer who said “The only abnormality is the incapacity to love” NIN
Anaïs Nin was a French author, famous for her journals that she wrote for over sixty years from the age of 11 right up to her death. Nin also wrote highly regarded erotica and cited D. H. Lawrence as someone from whom she drew inspiration. Nin was married to banker and artist Hugh Parker Guiler in 1923. Decades later in 1955, Nin married former actor Rupert Pole, even though she was still married to Guiler. Nin and Pole had their marriage annulled in 1966, but just for legal reasons, and they continued to live together as husband and wife until Nin passed away in 1977.

4. Hullabaloo HOOPLA
The word “hoopla” means “boisterous excitement”. The term probably comes from “houp-là”, something the French say instead of “upsy-daisy”. Then again, “upsy-daisy” probably isn’t something said very often here in the US …

Our word “hullabaloo” meaning a “commotion” is a derivative of an older term “hollo-ballo”. “Hollo-ballo” was a word used for an uproar in the north of England and Scotland.

10. 1994 Costner role EARP
The legendary Western gunfighter and lawman Wyatt Earp has been portrayed on the big and small screen many, many times. Kevin Costner played the title role in 1994’s “Wyatt Earp”, and Val Kilmer played Earp in 2012’s “The First Ride of Wyatt Earp”. Joel McCrea had the part in 1955’s “Wichita”, and Kurt Russell was Earp in 1993’s “Tombstone”.

11. 5 for B or 6 for C AT NO
The atomic number of an element is also called the proton number, and is the number of protons found in the nucleus of each atom of the element.

12. Orpheus, for one POET
Orpheus is a figure from Greek mythology, very often associated with poetry, singing, music and the lyre in particular. In ancient Greece there was even an Orphic cult that in effect adopted the poetry ascribed to Orpheus as central to the cult’s belief system. The adjectives “Orphic” and “Orphean” describe things pertaining to Orpheus, and because of his romantic, musical bent, the term has come to describe anything melodious or enchanting.

27. Colombia neighbor PANAMA
The nation that we now know as Panama sits on an isthmus that formed about 3 million years ago. The isthmus was the result of a land bridge forming between North and South America as two tectonic plates of the Earth’s crust slowly collided. Man first attempted to create a waterway across the Isthmus of Panama in 1881, but the 48-mile long Panama Canal only opened for business in 1914.

28. Actors John and Sean ASTINS
The actor John Astin is best known for playing Gomez, the head of the household on “The Addams Family” TV series.

Sean Astin is best known for playing the title role in the 1993 film “Rudy” and the character Samwise Gamgee in the “Lord of the Rings” movies. You might also have seen Astin playing Lynn McGill in the 5th season of “24”. Astin is the son of actress Patty Duke.

33. Musical org. based in Kawasaki TSO
The Tokyo Symphony Orchestra (TSO) was founded just after WWII, in 1946. The orchestra is based in Kawasaki, a city located in the Greater Tokyo Area, and routinely performs in several Tokyo concert halls.

34. Electrical measure OHM
The unit of electrical resistance is the ohm (with the symbol omega) named after German physicist Georg Simon Ohm. Ohm was the guy who established experimentally that the amount of current flowing through a circuit is directly proportional to the voltage applied, (V=IR) a relationship that every school kid knows as Ohm’s Law.

36. __-eared LOP
A creature that is “lop-eared” has bent or drooping ears.

48. Good-sized combo NONET
A nonet is a piece of music requiring nine musicians for a performance. The term is also used for the group itself.

56. Arkansas governor Hutchinson ASA
Asa Hutchinson is a Republican politician who took over as Governor of Arkansas in January of 2015. Hutchinson comes from a politically active family. Asa’s older brother Tim served a term as US Senator for Arkansas from 1997 to 2003. Tim’s identical twin sons were the first twins to serve alongside each other in the Arkansas General Assembly.

57. Actress Vardalos NIA
Not only is the delightful Nia Vardalos the star of the 2002 hit movie “My Big Fat Greek Wedding”, she also wrote the screenplay. The film never made it to number one at the box office, but it still pulled in more money than any other movie in history that didn’t make it to number one. That record I think reflects the fact that the film wasn’t a blockbuster but rather a so-called “sleeper hit”, a movie that people went to see based on referrals from friends. The big fat mistake came when a spin-off TV show was launched, “My Big Fat Greek Life”. It ran for only 7 episodes.

For the sake of completion, here is a full listing of all the answers:
Across
1. Birdbrain PINHEAD
8. Crummy CHEAPO
14. Annabella of “Jungle Fever” SCIORRA
15. Producer CREATOR
16. What each successive starting word of the answers to starred clues is to the starting word that precedes it SYNONYM
17. Equestrian’s head cover HAIR NET
18. Newscaster Lindström PIA
19. *Popular clubs HOTSPOTS
20. *Ty Cobb specialties STOLEN BASES
24. The last Mrs. Chaplin OONA
25. Valuable extraction ORE
26. Pros with schedules CPAS
30. Save BUT
31. *Dressed down TAKEN TO TASK
35. Closing words EPILOG
37. Hut SHANTY
38. *Didn’t allow to remain in, as political office REMOVED FROM
42. Trouble AIL
43. Barely come (through) SEEP
44. Box “b” on a W-2: Abbr. EIN
45. Magazine that published advance excerpts from Stephen King’s “Firestarter” OMNI
46. *It’s ancient history DISTANT PAST
50. *They might be knocked down in a bar COLD ONES
54. Hamlin’s caveman OOP
55. Like bogeys OVER PAR
56. What the start of 50-Across is to the start of 19-Across ANTONYM
60. Playing the waiting game PATIENT
61. Resort site SEASIDE
62. Pass ELAPSE
63. Minimally AT LEAST