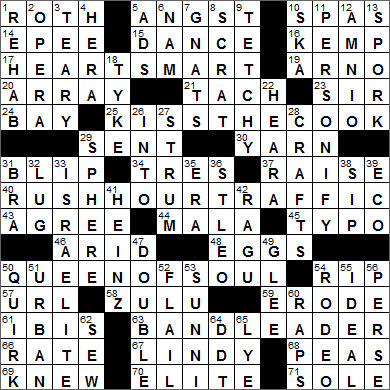 CROSSWORD SETTER: Gareth Bain
THEME: Bandleader … each of today’s themed answers LEADS off with the name of a BAND:

63A. Musical conductor … and, literally, what the start of each answer to a starred clue is BANDLEADER

Today’s Wiki-est, Amazonian Googlies
Across
1. “Goodbye, Columbus” author Philip ROTH
Author Philip Roth’s two most famous works are probably his 1959 novella “Goodbye, Columbus” for which he won a National Book Award, and his extremely controversial 1969 novel “Portnoy’s Complaint”. The latter title was banned in some libraries in the US, and was listed as a “prohibited import” in Australia. The controversy surrounded Roth’s treatment of the sexuality of the main character, a young Jewish bachelor undergoing psychoanalysis for his “complaint”.

14. Fencing choice EPEE
The sword known as an épée has a three-sided blade. The épée is similar to a foil and sabre, both of which are also thrusting weapons. However, the foil and saber have rectangular cross-sections.

16. Quarterback-turned-congressman Jack KEMP
Jack Kemp was a Vice Presidential candidate in the 1996 presidential election, on the Republican ticket with Bob Dole. Prior to politics, Kemp played football in the NFL, serving as quarterback and captain of the San Diego Chargers and the Buffalo Bills. Kemp passed away in 2009, and was posthumously awarded the Presidential Medal of Freedom by President Obama.

17. *Cardiologically healthy, as a diet HEART-SMART (giving “Heart”)
Heart is a rock band from Seattle, Washington, founded in the seventies and still going strong. The band has had a changing lineup, except for sisters Ann and Nancy Wilson.

19. River of Pisa ARNO
The Arno is the principal river in the Tuscany region of Italy, passing through the cities of Florence and Pisa. Famously the Arno flooded in 1966, the worst flood in the region for centuries. There were numerous deaths and extensive destruction of priceless art treasures, particularly in Florence.

44. __ fide: in bad faith MALA
Mala fide means “in bad faith” and is in essence the opposite to bona fide (“in good faith”). Bad faith is a concept defined by the law, which addresses the motives behind certain actions.

46. Dry as the Atacama ARID
Even deserts get rain at some point in the year, with very few exceptions. One of those exceptions is the Atacama Desert in South America, which receives no rain at all.

50. *Title for Aretha Franklin QUEEN OF SOUL (giving “Queen”)
I think Aretha Franklin, the Queen of Soul, had a tough life. Franklin had her first son when she was just 13-years-old, and her second at 15. In 2008, “Rolling Stone” magazine ranked Franklin as number one in their list of the greatest singers of all time.

Queen is an English rock band that was formed back in 1970. With the help of lead singer Freddie Mercury (now deceased), Queen has a long list of great hits, including “Bohemian Rhapsody”, “We Will Rock You” and “We Are the Champions”. “Bohemian Rhapsody” spent a total of nine weeks at number one in the UK.

61. Long-billed wader IBIS
The ibis is a wading bird that was revered in ancient Egypt. “Ibis” is an interesting word grammatically speaking. You can have one “ibis” or two “ibises”, and then again one has a flock of “ibis”. And if you want to go with the classical plural, instead of two “ibises” you would have two “ibides”!

67. “Lucky” aviator, familiarly LINDY
The renowned aviator Charles Lindbergh was dubbed “Lucky Lindy” by the press, which was perhaps a reference to his narrow escape in four airplane crashes, including two incidents when he had to deploy his parachute.

Down
2. Word before house or after horse OPERA
“Horse opera” is a slang term for a western movie or show.

4. Wife of Zeus HERA
In Greek mythology, Hera was the wife of Zeus and was noted for her jealousy and vengeful nature, particularly against those who vied for the affections of her husband. The equivalent character in Roman mythology was Juno. Hera was the daughter of Cronus and Rhea.

6. “China Beach” war zone, for short NAM
“China Beach” is a drama TV series set during the Vietnam War that aired in the late eighties and early nineties. The show’s storyline revolves around the women who worked at an evacuation hospital. The name “China Beach” was a nickname given to a beach in the city of Da Nang, Vietnam by American soldiers during the conflict.

8. “Ice Age” saber-toothed squirrel SCRAT
Scrat is a character in the “Ice Age” series of animated films. He is a sabre-toothed squirrel, a species that is alleged to be the ancestor of the modern squirrel and rat. The name “Scrat” is a melding of “squirrel” and “rat”.

9. Easily annoyed TETCHY
Someone described as “tetchy” is easily irritated. I seem to hear that word a lot …

10. Caribbean music SKA
Ska originated in Jamaica in the late fifties and was the precursor to reggae music. No one has a really definitive etymology of the term “ska”, but it is likely to be imitative of some sound.

11. Be the epitome of PERSONIFY
The more common meaning of “epitome” is a perfect example of a group, quality, type etc. An “epitome” is also an abstract or summary of a book or article.

12. Prenatal test, for short AMNIO
Amniocentesis is the prenatal test which involves the removal of a small amount of the amniotic fluid surrounding the fetus using a hypodermic needle. The fluid naturally contains some fetal cells, the DNA of which can then be tested to determine the sex of the child and to check for the presence of genetic abnormalities.

13. Hybrid utensil SPORK
“Spork” is the more common name for the utensil that is a hybrid between a spoon and a fork. It is less commonly referred to as a “foon”.

18. Kid TYKE
“Tyke” has been used playfully to describe a young child since at least 1902, but for centuries before that a tyke was a cur or mongrel, or perhaps a lazy or lower-class man.

22. “Do I __ Waltz?”: Rodgers/Sondheim musical HEAR A
“Do I Hear a Waltz?” is a musical by Richard Rodgers and Stephen Sondheim. The musical is based on the 1952 play “The Time of the Cuckoo”, as was the 1955 film “Summertime” starring Katharine Hepburn.

31. Lingerie item BRA
“Lingerie” is a French term, but as used in France it just means any underwear, worn by either males or females. In English we use “lingerie” to describe alluring underclothing worn by women. The term “lingerie” comes into English via the French word “linge” meaning “washables”, and ultimately from the Latin “linum”, meaning “linen”. We tend not to pronounce the word correctly in English, either here in the US or across the other side of the Atlantic. The French pronunciation is more like “lan-zher-ee”, as opposed to “lon-zher-ay” (American) and “lon-zher-ee” (British).

33. Descendant of Jacob ISRAELITE
In the Torah, the Israelites are traced back to Jacob, the grandson of Abraham. Jacob had twelve sons, six with each of his concurrent wives Leah and Rachel. The sons became the ancestors of the Twelve Tribes of Israel. The sons were:

36. Fifth cen. pope called “The Great” ST LEO
The first pope named Leo is now known as Pope Saint Leo the Great. Leo I is famous for meeting with the feared Attila the Hun and persuading him to turn back his invading force that was threatening to overrun Western Europe.

41. “57 Varieties” brand HEINZ
The HJ Heinz Company is an American concern, based in Pittsburgh, Pennsylvania. The company was founded in 1869, by Henry John Heinz. It was Heinz himself who came up with the marketing slogan of “57 Varieties”. The “57” really doesn’t have any relevance to the range of products available as Heinz chose the “5” because it was his lucky number, and the “7” because it was his wife’s lucky number.

42. Classico rival RAGU
The Ragu brand of pasta sauce is owned by Unilever. The name ” Ragù” is the Italian word for a sauce used to dress pasta, however the spelling is off a little. In Italian the word is “Ragù” with a grave accent over the “u”, but if you look at a jar of the Unilever sauce, it is spelled “Ragú” on the label, with an acute accent. Sometimes I think we just don’t try …

Classico is a brand of pasta sauce. One of Classico’s marketing techniques is to sell its products in Mason jars.

52. Swing wildly FLAIL
To flail about is to swing wildly, either literally or figuratively. The verb comes from the noun “flail”, which is an implement for threshing grain.

54. Event with lots of horsing around? RODEO
“Rodeo” is a Spanish word, which is usually translated as “round up”.

56. Intrinsically PER SE
“Per se” is a Latin phrase that translates as “by itself”. We use “per se” pretty literally, meaning “in itself, intrinsically”.

60. Emulates Eminem RAPS
Rap star Eminem’s real name is Marshall Mathers, a native of Saint Joseph, Missouri. Mathers grew up poor, raised by a single-mom as the family was abandoned by his father when he was 18 months old. Marshall and his mother moved around the country before settling in a suburb of Detroit. He didn’t do well at school, and dropped out at the age of 17. But in the end he made it pretty big …

64. Prohibited pesticide DDT
DDT is dichlorodiphenyltrichloroethane (don’t forget now!). DDT was used with great success to control disease-carrying insects during WWII, and when made available for use after the war it became by far the most popular pesticide. And then Rachel Carson published her famous book “Silent Spring”, suggesting there was a link between DDT and diminishing populations of certain wildlife. It was the public outcry sparked by the book, and reports of links between DDT and cancer, that led to the ban on the use of the chemical in 1972. That ban is touted as the main reason that the bald eagle was rescued from near extinction.

65. Chemical in Drano crystals LYE
To clean out drains we might buy Crystal Drano which is sodium hydroxide (lye) mixed with sodium nitrate, sodium chloride (table salt) and aluminum. The contents of Drano work in concert to clear the clog. The lye reacts with any fats creating soap which may be enough to break up the clog. Also, the finely-divided aluminum reacts with water creating tremendous heat so that that mixture boils and churns, then any hair or fibers are cut by the sharp edges of the nitrate and chloride crystals. Having said all that, I find that boiling water poured down the drain almost always does the job …