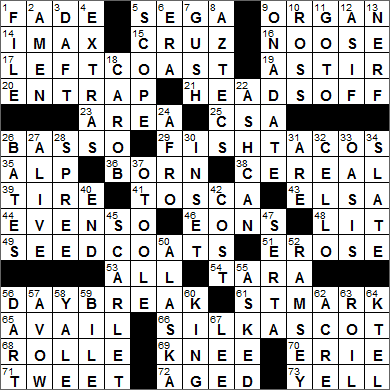 CROSSWORD SETTER: Jerome Gunderson
THEME: Tosca, Confused in the End … each of today’s themed answers ends with an anagram of TOSCA:

41A. Puccini title soprano whose name is an anagram of the ends of the four longest puzzle answers TOSCA

Today’s Wiki-est, Amazonian Googlies
Across
5. Sonic the Hedgehog developer SEGA
Sonic the Hedgehog is a title character in a videogame and the mascot of Sega, the COMPUTER game developer. Sonic was set up as a rival to Nintendo’s mascot “Mario”.

14. High-resolution film format IMAX
The IMAX Corporation, which is behind the IMAX film format, is a Canadian company. The impetus for developing the system came after Expo ’67 in Montreal. Back then large format screenings were accomplished using multiple projectors with multiple screens, with images basically stitched together. The team behind the IMAX technology set out to simplify things, and developed a single-camera, single-projector system.

17. Political nickname for the Pacific states LEFT COAST
The expression “Left Coast”, when used politically to describe the West Coast of the US, refers to the fact that the states of Washington, Oregon and California usually vote for the Democratic Party.

25. Civil War side: Abbr. CSA
The Confederate States of America (CSA) set up government in 1861 just before Abraham Lincoln took office. Jefferson Davis was selected as President of the CSA at its formation and retained the post for the life of the government.

26. Deep voice BASSO
The bass is the lowest male singing voice. A man with such a voice might be called a “basso” (plural “bassi”).

38. Trix or Kix CEREAL
Trix is a corn-based breakfast cereal that has been around since 1954, produced by General Mills. Ads for the cereal featured Trix Rabbit, who would try hard to get hold of bowls of the cereal. He would always get caught though, and be admonished with, “Silly rabbit, Trix are for kids!” With 46% sugar content, the rabbit probably wouldn’t have liked it anyway …

Kix cereal has been around since 1937, would you believe? Kix used to be just puffed grains, processed to give the characteristic shape. Then the decision was made to add sugar to get better penetration into the young kid marketplace. Sad really …

41. Puccini title soprano whose name is an anagram of the ends of the four longest puzzle answers TOSCA
Unlike so many operas, “Tosca” was a big hit right from day one, when it was first performed in 1900 at the Teatro Costanzi in Rome. “Tosca” is currently the eighth-most performed opera in America, although I’ve only seen it once myself …

43. Designer Schiaparelli ELSA
Elsa Schiaparelli was an Italian fashion designer, a great rival of the perhaps more famous Coco Chanel. Schiaparelli was most successful between the two World Wars, but her business closed in 1954 as she failed to adapt to changing tastes after WWII.

46. Geological timespans EONS
Geological time is divided into a number of units of varying lengths. These are, starting from the largest:

51. Uneven, as a leaf’s edge EROSE
An edge that is “erose” is irregularly notched or indented.

54. “Gone With the Wind” plantation TARA
Rhett Butler hung out with Scarlett O’Hara at the Tara plantation in Margaret Mitchell’s “Gone with the Wind”. Tara was founded not far from the Georgia city of Jonesboro by Scarlett’s father, Irish immigrant Gerald O’Hara. Gerald named his new abode after the Hill of Tara back in his home country, the ancient seat of the High King of Ireland.

61. Gospel writer enshrined in a Venice basilica ST MARK
St. Mark’s Basilica is the Roman Catholic cathedral in the the city of Venice, Italy. In front of the basilica is the Piazza San Marco, the city’s main public square. St. Mark’s Square is a remarkable urban space in Europe as the sound of the human voice dominates, rather than the sound of traffic. That is indeed remarkable …

66. Foppish neckwear SILK ASCOT
An Ascot tie is a horrible-looking (I think!) wide tie that narrows at the neck, which these days is only really worn at weddings. The tie takes its name from the Royal Ascot horse race at which punters still turn up in formal wear at Ascot Racecourse in England.

68. Esther of “Good Times” ROLLE
Esther Rolle was an actress best known for playing the character Florida Evans on the sitcom “Maude” and on the show’s spinoff “Good Times”.

70. Lake on New York’s western border ERIE
Lake Erie is the fourth largest of the five Great Lakes by area (Lake Ontario is the smallest). The lake takes its name from the Erie tribe of Native Americans that used to live along its southern shore. Erie is the smallest of the Great Lakes by volume and the shallowest, something for which nearby residents must be quite grateful. Being relatively shallow, much of Erie freezes over part way through most winters putting an end to most of the lake effect snow that falls in the snow belt extending from the lake’s edge.

71. 140-characters-or-less message TWEET
I have never tweeted in my life, and have no plans to do so (but one should never say “never”). Twitter is a microblogging service that limits any post sent to just 140 characters. In a sense, it is similar to this blog. Here I send out a post once a day containing information that I think might be useful to folks (thank you for reading!). I don’t think I could send out much of interest using just 140 characters.

Down
5. Mouthwash brand SCOPE
Scope is a brand of mouthwash made by Procter & Gamble. Scope has been marketed as the “better-tasting alternative” to Listerine.

8. Early Mexicans AZTECS
The Aztec people of Central America dominated the region in the 14th – 16th centuries. Two traits of the Aztec people are oft cited today. They built some magnificent pyramids, and they also engaged in human sacrifice. The two traits were linked in a way … for the consecration of the Great Pyramid of Tenochtitlan, 84,400 prisoners were sacrificed over a period of four days.

10. ’90s candidate H. __ Perot ROSS
Ross Perot graduated from the US Naval Academy in 1953, as president of his class. Perot served his 4-year commitment but then resigned his commission, apparently having become somewhat disillusioned with the navy. He was ranked number 101 on the Forbes 400 List of Richest Americans in 2012, and at that time was worth about $3.5 billion. Back in 1992, Perot ran as an independent candidate for US president. He founded the Reform Party in 1995, and ran as the Reform Party candidate for president in 1996.

13. Soft ball maker NERF
Nerf is the name given to the soft material used in a whole series of toys designed for “safe” play indoors. The Nerf product is used to make darts, balls and ammunition for toy guns. “NERF” is an acronym, standing for Non-Expanding Recreational Foam.

18. Chocolate substitute CAROB
The carob is a tree or shrub in the pea family, mainly grown for its seed pods. The carob seeds are dried or roasted, and when powdered or chipped make a good substitute for chocolate.

24. Dr. J hairstyle AFRO
Julius Erving is a retired professional basketball player who was known as “Dr. J”, a nickname he picked up in high school. Dr. J was a trailblazer in many ways, being the first player associated with slam dunking and other moves above the rim.

26. Motel in a Hitchcock classic BATES
Bates Motel and house were constructed on the backlot of Universal Studios for the 1960 HItchcock movie “Psycho”. They are still standing, and for me are the highlight of the backlot tour that is available to visitors.

34. Pool table slab SLATE
A good pool table has a very flat surface, usually made from 2-3 ground slabs of slate sourced from quarries in Italy, Brazil or China.

37. “Becket” star Peter O’TOOLE
Irish actor Peter O’Toole got his big break in movies when he played the title role in the 1962 epic film “Lawrence of Arabia”. But my favorite of O’Toole’s movies is much lighter fare, namely “How to Steal a Million” in which he stars opposite Audrey Hepburn.

45. Miss in the game of Clue SCARLET
Clue is another board game that we knew under a different name growing up in Ireland. Outside of North America, Clue is marketed as “Cluedo”. Cluedo was the original name of the game, introduced in 1949 by the famous British board game manufacturer Waddingtons. There are cute differences between the US and UK versions. For example, the man who is murdered is called Dr. Black (Mr. Boddy in the US), one of the suspects is the Reverend Green (Mr. Green in the US), and the suspect weapons include a dagger (a knife in the US), a lead pipe (lead piping in the US) and a spanner (a wrench in the US). I think it’s a fabulous game, a must during the holidays …

47. Mattress choice SERTA
Serta was founded in 1931 when a group of 13 mattress manufacturers came together, essentially forming a cooperative. Today, the Serta company is owned by eight independent licensees in a similar arrangement.

50. 49th state ALASKA
Statehood was approved by the US Congress for Alaska in 1958. Alaska became the 49th state in the union on January 3rd, 1959. Hawaii became the 50th state just a few months later, on August 21st.

52. Jazz pianist Lewis RAMSEY
Ramsey Lewis is a jazz composer and pianist from Chicago. Three of Lewis’s more famous recordings are “The In Crowd”, “Hang on Sloopy” and “Wade on the Water”, all of which were hits in 1966.

58. Third-oldest U.S. university YALE
The oldest universities in the US are:

64. “Power Hits” series record label K-TEL
K-Tel was founded in 1962 in Winnipeg, Manitoba by one Philip Kives. K-Tel’s recipe for success was the sale of inexpensive goods with a simple sales pitch and mail-order distribution.

67. Robert E. __ LEE
Robert E. Lee is renowned as a southern officer in the Civil War. Lee was a somewhat reluctant participant in the war in that he opposed the secession of his home state of Virginia from the Union. At the beginning of the war, President Lincoln invited Lee to take command of the whole Union Army but he declined, choosing instead to stay loyal to his home state. During the Civil War, Lee’s men referred to him affectionately as “Marse Robert”, with “marse” being slang for “master”.