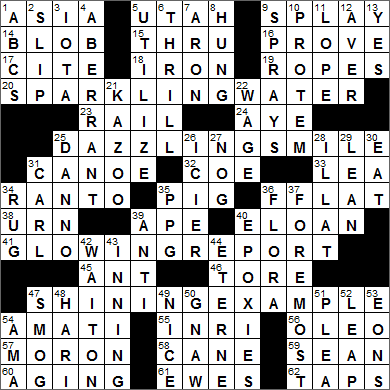 Today’s Wiki-est, Amazonian Googlies
Across
1. Singapore’s continent ASIA
The Asian city-state of Singapore takes its name from the Malay word “Singapura” which means “Lion City”. However, lions in the wild never made it to Singapore, so the city is probably misnamed and perhaps should have been called “Tiger City”.

31. Boat not to rock CANOE
The boat called a canoe takes its name from the Carib word “kenu” meaning “dugout”. It was Christopher Columbus who brought “kenu” into Spanish as “canoa”, which evolved into our English “canoe”.

32. Miler Sebastian COE
Sebastian Coe is a retired middle distance runner from the UK who won four Olympic medals including golds in the 1500m in 1980 and 1984. After retiring from athletics, Coe went into politics and served as a Member of Parliament from 1992 to 1997. In the year 2000, he was made a Life Peer, and so Coe now sits in the House of Lords. Lord Coe headed up London’s successful bid to host the 2012 Summer Olympic Games.

39. Galoot APE
“Galoot” is an insulting term meaning an awkward or boorish man, an ape. “Galoot” comes from the nautical world, where it was originally what a sailor might call a soldier or marine.

40. Online finance company E-LOAN
E-Loan used to be based just down the road from me in the San Francisco Bay Area, but after takeover by a Rosemont, Illinois company it was moved to the parent’s headquarters. E-Loan was founded in 1997 to provide customers access to mortgages over the Internet.

45. Tiny farm denizen ANT
Nowadays we use “denizen” to mean simply a resident, but historically a denizen was an immigrant to whom certain rights had been granted, something like today’s “resident alien”.

47. Epitome SHINING EXAMPLE
The more common meaning of “epitome” is a perfect example of a group, quality, type etc. An “epitome” is also an abstract or summary of a book or article.

54. Italian violin maker AMATI
The first of the Amati family to make violins was Andrea Amati, who lived in the 14th century. He was succeeded by his sons, Antonio and Girolamo. In turn, they were succeeded by Girolamo’s son, Nicolo. Nicolo had a few students who achieved fame making musical instruments as well. One was his own son, Girolamo, and another was the famed Antonio Stradivari.

55. Cross inscription INRI
The letters written on the cross on which Jesus died were “INRI”. INRI is an initialism for the Latin “Iesus Nazarenus, Rex Iudaeorum”, which translates into English as “Jesus the Nazarene, King of the Jews”.

57. Slow-witted one MORON
The rather unsavory term “moron” was formerly used by the medical community to describe someone with a degree of mental retardation. The term comes from the Greek “moros” meaning “foolish, dull”. Back in the early 1900s, IQ tests were used to classify those suffering from mental retardation into categories:

59. Actor Penn of “Mystic River” SEAN
“Mystic River” is a 2003 drama film based on a novel of the same name by Dennis Lehane. The movie was directed by Clint Eastwood and stars Sean Penn. The film has quite a dark storyline and deals with the difficult subject of pedophilia.

62. Repertoire requirement for a military bugler TAPS
“Taps” is played nightly by the US military, indicating “lights out”. It’s also known as “Butterfield’s Lullaby” as it is a variation of an older bugle call named the “Scott Tattoo”, arranged during the Civil War by the Union Army’s Brigadier General Daniel Butterfield. The tune is called “taps”, from the notion of drum taps, as it was originally played on a drum, and only later on a bugle. The whole tune comprises just 24 notes, with there only being four different notes within the 24, i.e. “low G”, C, E and “high G”. Minimalism at its best …

Down
3. Greek “i” IOTA
Iota is the ninth letter in the Greek alphabet. We use the word “iota” to portray something very small as it is the smallest of all Greek letters.

7. Elvis __ Presley ARON
Elvis Aron Presley (aka “the King”) was the younger of two identical twins. His brother was stillborn, delivered 35 minutes before Elvis. The brother was named Jesse Garon Presley. So, although born a twin, Elvis was raised as an only child.

10. President __: Senate bigwig PRO TEM
“Pro tempore” can be abbreviated to “pro tem” or “p.t.” “Pro tempore” is a Latin phrase that best translates as “for the time being”. It is used to describe a person who is acting for another, usually a superior. The President pro tempore of the US Senate is the person who presides over the Senate in the absence of the Vice President of the US. It has been tradition since 1890 that the president pro tem is the most senior senator in the majority party. The president pro tem ranks highly in the line of succession to the presidency, falling third in line after the Vice President and the Speaker of the House.

21. Hummed-into instrument KAZOO
The modern instrument we know today as the kazoo was invented by one Alabama Vest of Macon, Georgia in the 1800s. The kazoo first came to the public’s attention at the Georgia State Fair of 1852, when it was known as the “Down-South Submarine” (because of it’s shape, I would imagine).

25. “Hawaii Five-O” nickname DANNO
Danny Williams is a character on the TV show “Hawaii Five-O”, both in the original version that first aired in 1968 and in the remake that was first broadcast in 2010. The original, “Danno” is played by James McArthur. In the remake, Danno is played by Scott Caan, son of Hollywood actor James Caan. Book him, Danno!

27. Spiked yuletide beverage NOG
It’s not really clear where the term “nog” (as in “eggnog”) comes from although it might derive from the word “noggin”, which was originally a small wooden cup that was long associated with alcoholic drinks.

31. Astronomer Sagan CARL
Carl Sagan was a brilliant astrophysicist and a great communicator. Sagan was famous for presenting obscure concepts about the cosmos in such a way that we mere mortals could appreciate. He also wrote the novel “Contact” which was adapted into a fascinating 1997 film of the same name starring Jodie Foster.

47. Skyline haze SMOG
According to the World Health Organization (WHO), the cities with the worst air quality on the planet are, starting with the worst:

48. Big name in spydom HARI
Mata Hari was the stage name used by Margaretha Geertruida Zella, born in the Netherlands in 1876. After an unsuccessful and somewhat tragic marriage, Zella moved to Paris in 1903 where she struggled to make a living. By 1905 she was working as an exotic dancer and using the name Mata Hari. She was a successful courtesan, notably moving in various circles of high-ranking military officers. She apparently worked as a double agent, both for the French and the Germans. When Mata Hari was accused by the French of passing information to the enemy, she was tried, found guilty and executed by firing squad at the height of WW1, in 1917.