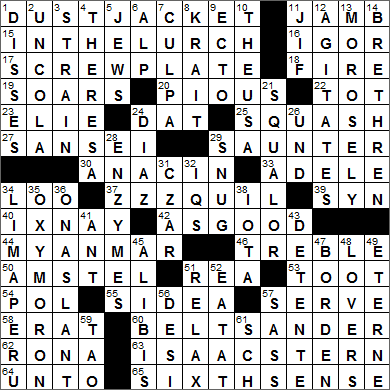 Today’s Wiki-est, Amazonian Googlies
Across
11. Window component JAMB
A door or window jamb is the vertical portion of the frame. The term “jamb” comes from the French word “jambe” meaning “leg”.

15. Bad way to leave someone IN THE LURCH
To leave someone “in the lurch” is to abandon them in a difficult position. The phrase comes from an old French game called “lourche” or “lurch”, which was similar to backgammon. A player left “in the lurch” was in a hopeless position from which he or she could only lose the game.

16. Harpsichordist Kipnis IGOR
Igor Kipnis was a German-born American harpsichord and piano player. As a harpsichordist, Kinis was famous for playing not just the classics from the 16th through 18th centuries, but also contemporary works and jazz pieces.

17. Threading tool SCREWPLATE
A screwplate is a metal plate containing threaded holes of various sizes. The plate is used to cut or repair screw threads by hand.

23. Tahari of fashion ELIE
Elie Tahari is an American fashion designer, although he was born in Jerusalem. Tahari immigrated to the US from Israel in 1971 and started work as an electrician in the the Garment District in New York City. It was there that he became interested in fashion.

24. Slurred pronoun DAT
Dis, dat, dese and dose … this, that, these and those.

25. Game invented at Harrow School around 1830 SQUASH
Squash is a racquet sport that is similar to the more common racquetball (more common here in the US, I think). The game is derived from the older sport of racquets, and was introduced around 1830 by students at Harrow School in London. It was originally called squash racquets as the first ball used was a racquets ball that was punctured. It was very, very squashable and much softer than that used in the parent game.

30. Its website includes a Headache Center ANACIN
Anacin is a pain reliever, with aspirin and caffeine as active ingredients.

34. John of England LOO
When I was growing up in Ireland, a “bathroom” was a room that had a bath and no toilet. The separate room with the commode was called “the toilet” or sometimes the W.C. (the water closet). Apparently the term closet was used because in the 1800s when homeowners started installing toilets indoors they often displaced clothes and linens in a “closet”, as a closet was the right size to take the commode. It has been suggested that the British term “loo” comes from Waterloo (water-closet … water-loo), but no one seems to know for sure. Another suggestion is that the term comes from the card game of “lanterloo” in which the pot was called the loo!

Sir John Harington was an author and a member of the court of Queen Elizabeth I of England. However, Harington is perhaps best remembered as the inventor of the flush toilet. Our slang term “john” meaning “toilet”, is thought to be a reference to John Harington.

37. Aptly named sleep aid ZZZQUIL
ZzzQuil, Benadryl, Unisom and Sominex are all brand names for the antihistamine diphenhydramine, which also has sedative properties.

40. “No way!” IXNAY!
Pig Latin is in effect a game. One takes the first consonant or consonant cluster of an English word and moves it to the end of the word, and then adds the letters “ay”. So the Pig Latin for the word “nix” is “ix-n-ay” … ixnay, and for “scram” is “am-scr-ay”

44. Where the Irrawaddy flows MYANMAR
The Irrawaddy River is the largest waterway in Myanmar. The Irrawaddy has been of great importance to the country since the days when it was the British colony of Burma. The British developed an extensive network of irrigation canals fed by the river, and also used the Irrawaddy to transport goods from the north of the country to the Irrawaddy Delta that leads to the Bay of Bengal and the Indian Ocean. The Irrawaddy is sometimes referred to as “The Road to Mandalay”, after Rudyard Kipling’s poem.

50. Netherlands river AMSTEL
The Amstel is the main river through the Dutch city of Amsterdam. Indeed, the name “Amsterdam” comes from the “dam” on the “Amstel” River.

51. “V for Vendetta” actor REA
“V for Vendetta” is a 2006 movie based on the political thriller graphic novel of the same name by Alan Moore and David Lloyd. The film stars Hugo Weaving, Natalie Portman and Stephen Rea. Two other Moore novels made it to the big screen: “From Hell” and “The League of Extraordinary Gentlemen”.

58. Proof word ERAT
QED is used at the end of a mathematical proof or a philosophical argument. The QED initialism stands for the Latin “quod erat demonstrandum” meaning “that which was to be demonstrated”.

62. First name in gossip RONA
Rona Barrett is a gossip columnist originally from New York City but who plies her trade in Southern California. Barrett started out as with a gossip column that was syndicated in newspapers but then made a successful transition to television. She made regular appearances in news broadcasts and on her entertainment shows in the sixties and seventies.

63. Musician with the autobiography “My First 79 Years” ISAAC STERN
Isaac Stern was Ukrainian-born, but moved with his family to San Francisco at a very young age. He was a wonderful violin virtuoso who passed away in 2001.

64. “Once more __ the breach”: Shak. UNTO
Shakespeare’s play “Henry V” is more correctly called “The Life of Henry the Fifth”. The story mainly focuses on his life before and immediately after his celebrated victory over the French at the Battle of Agincourt. “Henry V” includes one of Shakespeare’s most celebrated speeches, an address by the king to his troops at the siege of Harfleur, with the opening lines:

Down
2. Beverage nickname introduced in 1967 UNCOLA
7UP was introduced to the world as “Bib-Label Lithiated Lemon-Lime Soda”, and was a patent medicine that contained lithium citrate, a mood-stabilizing drug. Paradoxically, it came on the market in 1929 just two weeks before the Wall Street Crash. The 7UP “Uncola” campaign dates back to 1967.

4. Television personality Caputo THERESA
Theresa Caputo is a medium who appears on the reality TV show “Long Island Medium”. That’s a show I haven’t seen, and probably never will …

5. Yeshiva students JEWS
In the Jewish tradition a yeshiva is an educational institution focusing on the study of sacred texts.

6. Sight from the Brenner Pass ALP
The Brenner Pass is one of the main mountain passes through the Alps, and is located along the border between Austria and Italy. The name “Brenner” comes from “Prenner”, the name of a nearby farm and its owner. There is a motorway that goes through the pass today, but it is renowned for the long traffic jams that build up especially when northern Europeans are heading to the Mediterranean for summer vacation.

7. Apology ender CULPA
Many Roman Catholics are very familiar with the Latin phrase “mea culpa” meaning “my fault”, as it is used in the Latin Mass. The additional term “mea maxima culpa” translates as “my most grievous fault”.

8. Venomous Asian snake KRAIT
Kraits are venomous snakes from the Indian Subcontinent and Southeast Asia. Kraits prey mainly on other snakes, including other kraits.

9. Prefix with plasm ECTO-
In the real world, ectoplasm is part of the cytoplasm of a cell. In the paranormal world, ectoplasm is that spiritual energy that some people claim to be able to see, that emanates from ghostly characters. It’s that ethereal shape that is sometimes seen in photographic images, which can be interpreted as the energy of some spirit from “the other side”. Spooky stuff …

10. Springsteen’s birthplace? THE USA
“Born in the USA” is a 1984 song (and album) written and recorded by Bruce Springsteen. The song was written three years earlier as the title song for a movie, but was never used. That film ultimately was released as “Light of Day” starring Michael j. Fox. The original intention was for Springsteen to star in the film himself.

11. Peter Pan rival JIF
Jif is the leading brand of peanut butter in the US, and has been since 1981. Introduced in 1958, it is now produced by Smuckers.

The Peter Pan brand of peanut butter is of course named after the character in the J. M. Barrie play. What we know today as Peter Pan peanut butter was introduced in 1920 as E. K. Pond peanut butter, and renamed in 1928.

24. Seven-term Mexican president Porfirio __ DIAZ
Porfirio Diaz served seven terms as President of Mexico, from 1876 to 1911. Diaz’s thirty-five year reign is referred to as the “Porfiriato”. The Porfiriato came to end with the Mexican Revolution, and Diaz’s escape to France. The former president died there in exile four years later, and was buried in the Montparnasse Cemetery in Paris.

28. Food processors ENZYMES
Enzymes are basically catalysts, chemicals that act to increase the rate of a particular chemical reaction. For example, starches will break down into sugars over time, especially under the right conditions. However, in the presence of the enzyme amylase (found in saliva) this production of sugar happens very, very quickly.

32. Brightness measures IQS
Although it is correct these days to say that the abbreviation IQ stands for “intelligence quotient”, the term was actually coined by German psychologist William Stern, so it actually is an abbreviation for the German “Intelligenz-Quotient”.

34. Planned 2019 Pan American Games host LIMA, PERU
Lima is the capital city of Peru. Lima was founded in 1535 by the Spanish conquistador Francisco Pizarro, who named it “la Ciudad de los Reyes” (the City of Kings). He chose this name because the decision to found the city was made on January 6th, the feast of the Epiphany that commemorates the visit of the three kings to Jesus in Bethlehem.

35. Open secret, e.g. OXYMORON
The word “oxymoron” is in itself an oxymoron, as it is derived from the Greek words “Oxys” and “moros” meaning “sharp” and “stupid”.

38. Shred IOTA
Iota is the ninth letter in the Greek alphabet. We use the word “iota” to portray something very small as it is the smallest of all Greek letters.

43. Thaw DETENTE
“Détente” is a French word meaning “loosening, reduction in tension” and in general it is used to describe the easing of strained relations in a political situation. In particular, the policy of détente came to be associated with the improved relations between the US and the Soviet Union in the seventies.

45. Outs ALIBIS
“Alibi” is the Latin word for “elsewhere” as in, “I claim that I was ‘elsewhere’ when the crime was committed … I have an ‘alibi'”.

47. Dairy giant BORDEN
Borden used to be the country’s biggest producer of dairy and pasta products. The company ran up major losses in the nineties from which it really couldn’t recover and so is no longer operating. Famously, Borden introduced Elsie the cow as a “spokes-animal” and mascot. Elsie is now used by companies other than the defunct Borden.

56. ’50s sitcom name DESI
Desi Arnaz was famous for his turbulent marriage to Lucille Ball. Arnaz was a native of Cuba, and was from a privileged family. His father was Mayor of Santiago and served in the Cuban House of Representatives. However, the family had to flee to Miami after the 1933 revolt led by Batista.

59. Eastern ideal TAO
The Chinese character “tao” translates as “path”, but the concept of Tao signifies the true nature of the world.

61. Auburn, for one: Abbr. SCH
Auburn University in Alabama was chartered in 1856, as the East Alabama Male College. The school was renamed when it was granted university status in 1960.