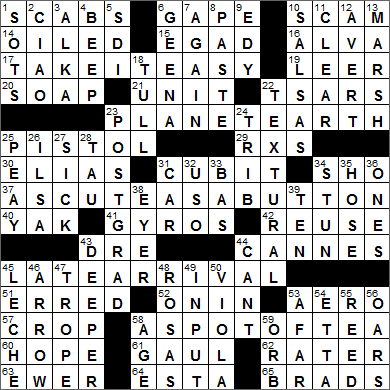 CROSSWORD SETTER: Jerry Edelstein
THEME: A Spot of Tea … each of today’s themed answers has A SPOT for TEA, as TEA is a hidden word:

17A. “Calm down” TAKE IT EASY
23A. BBC nature series with the episodes “Jungles” and “Mountains” PLANET EARTH
37A. Adorable AS CUTE AS A BUTTON
45A. Delayed flight, e.g. LATE ARRIVAL

Today’s Wiki-est, Amazonian Googlies
Across
1. Workers who cross picket lines SCABS
We first started calling strikebreakers “scabs” in the early 1800s, and before that a scab was a person who refused to join a trade union (back as early 1777). The word probably comes from the use of “scab” as a symptom of a skin disease, and so is a term that is meant to insult.

16. Thomas __ Edison ALVA
Thomas Edison was a very successful inventor. He held over a thousand US patents in his name. Included in the list of Edison’s inventions is the phonograph, the movie camera and the long-lasting light bulb. He passed away in 1931. There is a test tube at the Henry Ford Museum that supposedly holds Edison’s last breath. Ford convinced Thomas’s son Charles to seal up a tube of air in the room just after the inventor died, as a memento.

21. Pint or pixel UNIT
A US pint is made from 16 fluid ounces, and an imperial pint is 20 fluid ounces. The term “pint” comes into English via Old French, ultimately from the Latin “picta” meaning “painted”. The name arose from a line painted on the side of a beer glass, marking a full measure of ale.

A pixel is a dot, the base element that goes to make up a digital image. The term “pixel” comes from “pix” (i.e. pics) and the first syllable of “element”.

22. Former Russian rulers TSARS
The last ruler of Imperial Russia was Tsar Nicholas II (of the House of Romanov). Famously, the Tsar and his family were murdered in 1918 in the basement of a house in Yekaterinburg, Russia by members of the Bolshevik secret police. The Tsar’s youngest daughter was 16-year-old Anastasia and rumors of her escape have persisted for years. The rumors grew with the help of numerous women who claimed to be Anastasia. In 2009, DNA testing finally proved that the remains of all of the Tsar’s immediate family, including Anastasia, have been found and identified.

23. BBC nature series with the episodes “Jungles” and “Mountains” PLANET EARTH
“Planet Earth” is a spectacular nature documentary first aired in 2006 by the BBC. It was also shown in the US on the Discovery Channel in 2007. The eleven episodes of “Planet Earth” are not only fascinating because of the content, but are also a visual delight as the marvelous cinematography used high-definition technology. Well worth a rental …

29. CVS pickups RXS
There seems to some uncertainty about the origin of the symbol “Rx” that’s used for a medical prescription. One explanation is that it comes from the astrological sign for Jupiter, a symbol put on prescriptions in days of old to invoke Jupiter’s blessing to help a patient recover.

The name of the drugstore chain CVS once stood for Consumer Value Stores, although these days the company uses the acronym to denote Convenience, Value and Service.

30. Inventor Howe ELIAS
Elias Howe was an American inventor. Howe wasn’t the first to come up with the idea of a sewing machine, but he was the first to develop one that was functional.

31. Ark measurement CUBIT
The ancient unit of length called a cubit was chosen as the length of the forearm. In some cultures a cubit was divided into 7 palms, the width of the hand excluding the thumb.

34. “Dexter” network, briefly SHO
“Dexter” is a crime show that airs on Showtime. The title character works for the Miami Police Department as an expert in blood spatter patterns by day, but is a serial killer by night. The original series was based on the “Dexter” novels written by Jeff Lindsay. I haven’t seen this show myself, but my eldest son really enjoys it …

37. Adorable AS CUTE AS A BUTTON
We use the phrase “cute as a button” over here in North America. When I was growing up on the other side of the Atlantic, we said “bright as a button”. I believe both phrases have the same meaning.

41. Greek sandwiches GYROS
A gyro is a traditional Greek sandwich made with pita bread and containing meat, tomato, onion and tzatziki (a yogurt and cucumber sauce). The meat for gyros is usually roasted on a tall vertical spit and is sliced from the spit as required. The name “gyro” comes from the modern Greek word “gyros” meaning “circle”, a reference to the meat turning as it is grilled in a rotating circular motion.

43. Rapper Dr. __ DRE
Dr. Dre is the stage name of rapper Andre Romelle Young. Dr. Dre is known for his own singing career as well as for producing records and starting the careers of others such Snoop Dogg, Eminem and 50 Cent.

44. Riviera film festival site CANNES
Cannes is a city on the French Riviera, noted as host of the Cannes Film Festival. The idea of the annual film festival was adopted by the city just before WWII. However, the festival had to wait for the end of the war for its launch in 1946.

61. Ancient France GAUL
The Gauls were a Celtic race, with Gaul covering what is now known as France and Belgium. We use the term “Gallic” today, when we refer to something pertaining to France or the French.

65. Thin nails BRADS
A “brad” is a lender wire nail with a relatively small head that is typically used to “tack” pieces of wood together, to fasten either temporarily or with minimal damage to the wood. Nowadays, brads are commonly applied using a nail gun.

Down
1. They’re way more than social drinkers SOTS
Our word “sot” comes from the Old English “sott”, meaning “fool”. The word “sot” started to be associated with alcohol and not just foolery in the late 1500s.

3. __-Seltzer ALKA
Alka-Seltzer is a brand of fizzy antacid that has been marketed since 1931. In terms of ingredients, it is a mix of sodium bicarbonate, aspirin and anhydrous citric acid.

5. 1980s missile prog. SDI
One of the positive outcomes of President Reagan’s Strategic Defense Initiative (SDI, also “Star Wars”) was a change in US defense strategy. The new approach was to use missiles to destroy incoming hostile weapons, rather than using missiles to destroy the nation attacking the country. The former doctrine of Mutually Assured Destruction went by the apt acronym of MAD …

6. Davis of “Commander in Chief” GEENA
As well as being a successful Hollywood actress, Geena Davis is an accomplished archer and came close to qualifying for the US archery team for the 2000 Summer Olympics. Davis is also a member of American Mensa. She is quite the lady …

9. Ice cream maker Joseph EDY
Dreyers’ ice cream sells its products under the name Dreyers in the Western United States, and Edy’s in the Eastern states. The company’s founders were William Dryer and Joseph Edy.

18. Rock’s Jethro __ TULL
Jethro Tull is a rock band from the UK, formed in 1967 and still going strong today. The band uses the name of a 18th-century, English agriculturist.

23. Ph.D. candidate, e.g. POSTGRAD
Ph.D. is an abbreviation for “philosophiae doctor”, Latin for “teacher of philosophy”.

24. Chicago daily, familiarly TRIB
“The Chicago Tribune” was first published in 1847. The most famous edition of “The Trib” was probably in 1948 when the headline was “DEWEY DEFEATS TRUMAN”, on the occasion of that year’s presidential election. When it turned out Truman had actually won, the victor picked up the paper with the erroneous headline and posed for photographs with it … a famous, famous photo, that must have stuck in the craw of the editor at the time.

25. Austin __: Tennessee university PEAY
Austin Peay was the Governor of Tennessee from 1923 until 1927. It was Governor Peay who signed into law the Butler Act, which prevented public schools from teaching the Theory of Evolution. It was the Butler Act that precipitated the Scopes Monkey Trial.

26. Ingrid’s role in “Casablanca” ILSA
The movie “Casablanca” was released in January of 1943, timed to coincide with the Casablanca Conference, the high-level meeting between Roosevelt and Churchill. The film wasn’t a box-office hit, but gained critical acclaim, winning three Oscars including Best Picture. The signature song “As Time Goes By” was written many years earlier for a 1931 Broadway musical called “Everybody’s Welcome”, and was a hit in 1931 for Rudy Vallee. But today we all remember the Casablanca version, sung by Dooley Wilson (who played “Sam” in the film). Poor Dooley didn’t get to record it as a single, due to a musician’s strike in 1943, so the 1931 Rudy Vallee version was re-released that year and became an even bigger hit second time round.

28. Letter after sigma TAU
Tau is the 19th letter of the Greek alphabet, the letter which gave rise to our Roman “T”. Both the letters tau (T) and chi (X) have long been symbolically associated with the cross.

31. Sleeping or slot follower CAR
Slot cars are those motorized toy cars that run around on tracks picking up power from the slot in the racing surface. The first slot cars were made by the Lionel company, the manufacturer of toy trains sets. They first appeared in 1912.

32. GI show sponsor USO
The United Service Organization (USO) was founded in 1941 at the request of FDR “to handle the on-leave recreation of the men in the armed forces”. A USO tour is undertaken by a troupe of entertainers, many of whom are big-name celebrities. A USO tour usually includes troop locations in combat zones.

33. __-relief BAS
In bas-relief, an image projects just a little above the background, as in perhaps a head depicted on a coin.

44. “__ Buy Me Love”: Beatles hit CAN’T
“Can’t Buy Me Love” is a 1964 Beatles song. Paul McCartney composed it on an upright piano in a hotel room in the magnificent George V hotel in Paris.

45. Café lightener LECHE
In Spanish, one might have “café con leche” (coffee with milk).

48. Bouquet for a señorita ROSAS
In Spanish, a “señorita” (miss) might receive a bouquet of “rosas” (roses).

54. “At Last” singer James ETTA
Etta James was best known for her beautiful rendition of the song “At Last”. Sadly, as she disclosed in her autobiography, James lived a life that was ravaged by drug addiction leading to numerous legal and health problems. Ms. James passed away in January 2012 having suffered from leukemia.