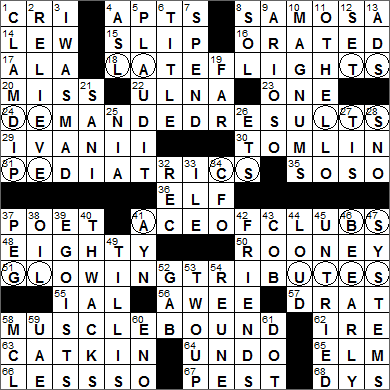 CROSSWORD SETTER: Jeffrey Wechsler
THEME: Musclebound … each of today’s themed answers is BOUNDED by the familiar name for a group of MUSCLES (spelled out in the grid by the circled letters).

58A. Like some weightlifters, and a hint to this puzzle’s circles MUSCLEBOUND

Today’s Wiki-est, Amazonian Googlies
Across
1. Dernier __ CRI
The French phrase “dernier cri” translates literally as “the latest cry or scream”, but is used to denote the latest fashion, something that is “all the rage”.

4. They may have EIKs APTS
Eat-in kitchen (EIK)

8. Savory Asian pastry SAMOSA
A samosa is quite a tasty appetizer, usually a triangular-shaped savory that often has a vegetarian filling. The word “samosa” is primarily used on Indian menus, and the name comes from “sanbosag”, the name for the dish in Persia.

14. Kareem, once LEW
Kareem Abdul-Jabbar’s name at birth was Ferdinand Lewis “Lew” Alcindor. Alcindor changed his name when he converted to Islam.

15. Berth place SLIP
A “slipway” or “slip” is a ramp on the shore in which boats can “slip” into the water. This “slipping” into the water was is literally the case in a shipyard where a vessel’s hull slips off the ramp after it is coated with grease.

16. Took to the stump ORATED
“To stump” can mean to go on a speaking tour during a political campaign. This peculiarly American term dates back to the 19th century. Back then a “stump speech” was an address given by someone standing on a large tree stump that provided a convenient perch to help the speaker get his or her message across to the crowd.

17. Reminiscent of A LA
The phrase “in the style of” can be translated in “alla” in Italian and “à la” in French.

23. Points for a free throw ONE
That would be in basketball …

29. 14th-century Russian prince IVAN II
Ivan II, Grand Prince of Moscow from 1353 to 1359, was also known as Ivanovich the Fair. Ivan succeeded his brother, who was known as Simeon the Proud.

30. “Grandma” co-star TOMLIN
Lily Tomlin is a comedian and actress who got her big break as a regular member of the cast of “Rowan & Martin’s Laugh-In” in the late sixties and early seventies. Tomlin created several great characters on the show. My personal favorite is Ernestine, the condescending telephone operator with the marvelous nasal voice and snorting laugh. Ernestine was fond of saying “One ringy dingy …” I really enjoy Tomlin’s performances as an actress, notably in the movies “9 to 5” and “All of Me”, and on the TV show “The West Wing”. I went to her stage show many years ago in San Francisco, and just did not enjoy it. I was devastated …

48. Number in a Verne title EIGHTY
“Around the World in 80 Days” is just a wonderful adventure story, written by French author Jules Verne and first published in 1873. There have been some great screen adaptations of the story, including the 1956 movie starring David Niven as Phileas Fogg. In almost all adaptations, a balloon is used for part of the journey, perhaps the most memorable means of transportation on Fogg’s trip around the world. However, if you read the book, Fogg never used a balloon at all.

50. “60 Minutes” humorist ROONEY
Andy Rooney began his career in newspapers during WWII working for “Stars and Stripes” in London. He had some memorable experiences during the war, including flying on the first American bombing raid over Germany. He was also one of the first American journalists to visit the German concentration camps as they were liberated. He started his segment called “A Few Minutes with Andy Rooney” on CBS’s “60 Minutes” way back in 1978, and so was on our screens for over 40 years. Rooney passed away in 2011. He was a cool, cool guy …

62. Choler IRE
“Choler” is “anger, irritability”. Choler (also “cholera”) was one of the body’s four basic substances, the so-called four humors. All diseases were caused by these four substances getting out of balance. The four humors were:

63. Willow flower cluster CATKIN
Alder trees are deciduous (i.e. not evergreen), and the fruit of the tree is called a “catkin”. The tree carries both male and female catkins that look very similar to each other, but the male catkin is longer than the female. Alders are pollinated by wind usually, although bees can play a role.

Down
4. Silent comm. method ASL
It’s really quite unfortunate that American Sign Language (ASL) and British Sign Language (BSL) are very different, and someone who has learned to sign in one cannot understand someone signing in the other.

5. Enthusiastic praise PLAUDIT
“Plaudits” are enthusiastic expressions of approval. The term comes from the Latin word “plaudite!”, which was an appeal made by actors for “applause” at the end of a performance.

9. Melodic passage ARIOSO
An arioso (plural “ariosi”) is a solo vocal piece in a classical work such as an opera or an oratorio. An arioso’s structure lies somewhere between that of a full-blown aria and speech-like recitative.

10. Wine buys MAGNUMS
The list of standard sizes for wine bottles is quite long. The main ones encountered would be:

11. “… And when I love thee not / Chaos is come again” speaker OTHELLO
Shakespeare’s “Othello” was first performed in 1604. The main characters in the play are:

13. Much spam ADS
Apparently the term “spam”, used for unwanted email, is taken from a “Monty Python” sketch. In the sketch (which I’ve seen) the dialog is taken over by the word “Spam”, a play on the glut of canned meat in the markets of Britain after WWII. So “spam” is used for the glut of emails that takes over online communication. I can just imagine nerdy Internet types (like me) adopting something from a “Monty Python” sketch to describe an online phenomenon …

21. __-Wipe: cleaning brand SANI
Sani-Wipe is a sanitizing wipe made by Sani Professional.

When Gene Roddenberry first proposed the science fiction series that became “Star Trek”, he marketed it as “Wagon Train to the Stars”, a pioneer-style Western in outer space. In fact his idea was to produce something more like “Gulliver’s Travels”, as he intended to write episodes that were adventure stories on one level, but morality tales on another. Personally I think that he best achieved this model with the spin-off series “Star Trek: The Next Generation”. If you watch individual episodes you will see thinly disguised treatments of moral issues such as racism, homosexuality, genocide etc. For my money, “The Next Generation” is the best of the whole franchise …

28. Nestlé’s __-Caps SNO
Sno-Caps are a brand of candy usually only available in movie theaters. Sno-caps have been around since the 1920s, would you believe?

The island of Martinique in the eastern Caribbean is actually a part of France, and is referred to as an “overseas department”. As such, Martinique is part of the European Union, and even uses the euro as its currency. The island is fully represented in the French National Assembly and Senate, just like any department within France. It’s sort of like the status of Hawaii within the US.

38. Venezuela export OIL
The country name of “Venezuela” originated with the Italian explorer Amerigo Vespucci. Vespucci saw stilt houses around Lake Maracaibo that reminded him of the city of Venice, leading him to call the region “Veneziola” meaning “Little Venice”. Over time, “Veneziola” evolved into “Venezuela” as a result of Spanish influence.

41. Writer Rand AYN
Ayn Rand was the pen name of Russian-American novelist Alisa Rosenbaum. Rand’s two best known works are her novels “The Fountainhead” published in 1943 and “Atlas Shrugged” in 1957. Back in 1951, Rand moved from Los Angeles to New York City. Soon after, she gathered a group of admirers around her with whom she discussed philosophy and shared drafts of her magnum opus, “Atlas Shrugged”. This group called itself “The Collective”, and one of the founding members was none other than future Federal Reserve chairman, Alan Greenspan.

42. ’90s-’00s hit sitcom for 10 seasons FRIENDS
When the incredibly successful sitcom “Friends” was in development it was given a working title “Insomnia Cafe”. This was changed to “Friends Like Us”, before final going to air as “Friends”.

49. “Coca-Cola Cowboy” singer TILLIS
Mel Tillis is a country singer who had most of hits in the seventies. Notably, Tillis has a speech impediment, but this does not affect his singing at all.

52. Chew the fat GAB
Back in the day, a wealthy man would “bring home the bacon” and sit around with guests and “chew the fat”.

58. Commonly injured knee ligament, briefly MCL
The medial collateral ligament (MCL) is a ligament of the knee, on the inside (medial) side of the joint.

59. Federation in OPEC UAE
The United Arab Emirates (UAE) is a federation of seven emirates (states) in the Middle East. Included in the seven are Abu Dhabi and Dubai, with the city of Abu Dhabi being the UAE capital and cultural center.

60. “Small Craft on a Milk Sea” musician ENO
Brian Eno was one of the pioneers of the “ambient” genre of music. Eno composed an album in 1978 called “Ambient 1: Music for Airports”, the first in a series of four albums with an ambient theme. Eno named the tracks somewhat inventively: 1/1, 2/1, 2/1 and 2/2.

61. Semicolon? DOT
The punctuation mark known as a colon consists of two dots, so with a little whimsy, a single dot might be described as a “semicolon”.