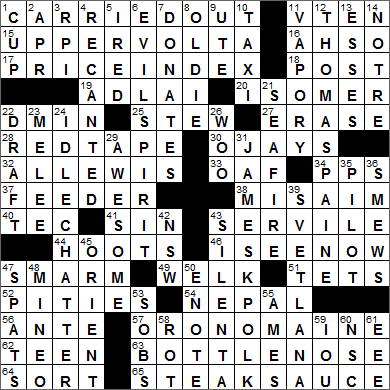 Today’s Wiki-est, Amazonian Googlies
Across
11. Powerful engine V-TEN
The engine known as a V10 is configured with two rows of five cylinders mounted on a crankcase. The rows of cylinders are offset from each other around the crankshaft at right angles, or perhaps a little less. This arrangement of ten cylinders in a V-shape gives rise to the name “V10”.

15. Prior name of Burkina Faso UPPER VOLTA
Burkina Faso is an inland country in western Africa. The country used to be called the Republic of Upper Volta and was renamed in 1984 to Burkina Faso meaning “the land of upright people”.

16. Understanding words AHSO
The slang term “ahso” is used in American English to mean “I see”. The term derives from the Japanese expression “Ah so desu ka” meaning “Oh, that’s how it is”.

19. First name in 1950s politics ADLAI
Adlai Stevenson (AES) ran for president unsuccessfully against Dwight D. Eisenhower in 1952 and in 1956. Some years after his second defeat, Stevenson served under President Kennedy as Ambassador to the United Nations. Stevenson was always noted for his eloquence and he had a famous exchange in a UN Security Council meeting during the Cuban missile crisis. Stevenson bluntly demanded that the Soviet representative on the council tell the world if the USSR was installing nuclear weapons in Cuba. His words were “Don’t wait for the translation, answer ‘yes’ or ‘no’!” followed by “I am prepared to wait for my answer until Hell freezes over!”

20. Chemical relative ISOMER
In the world of chemistry, isomers are two compounds with chemical formula i.e. the same atomic constituents, but with a slightly different arrangement of the atoms relative to each other. The differing arrangement of atoms often leads to different chemical properties.

28. Washington’s forte? RED TAPE
Back in the days of yore in England, official documents were bound in bundles with red ribbon. So, getting through all the paperwork required “cutting through the red tape”.

30. “I Love Music” group, with “The” O’JAYS
The O’Jays are an R&B group from Canton, Ohio. They came together in 1963 as a band of five singers and are still performing today, although now only as a trio. The band took the name of the O’Jays as a tribute to a radio disk jockey called Eddie O’Jay who was big in Cleveland at the time. The biggest hit for the O’Jays is “Love Train”, released in 1972.

The 1975 song “I Love Music” is a disco number recorded by the O’Jays. one of the notable facts about the recording is a bongo-drum solo, performed by comedian Bill Cosby.

32. Grandpa Munster portrayer AL LEWIS
Al Lewis was the actor famous for playing Grandpa Munster on television’s “The Munsters”. Lewis was very active politically and even ran for Governor of New York in 1998 for the Green Party.

34. Ltr. extender PPS
One adds a PS (post scriptum, or simply “postscript”) at the end of a letter (ltr.). A second postscript is a post post scriptum, a PPS.

43. Fawning SERVILE
The verb “to fawn” has a different etymology to the noun “fawn”. The Old English “faegnian” meant “to rejoice, be glad”. In particular, the Old English verb applied to a dog wagging its tail. From there “to fawn” came to mean “to court favor, to grovel”.

47. Gushing flattery SMARM
The term “smarm”, meaning insincere flattery, comes from a colloquial word “smalm” meaning to smear the hair with some sort of styling product.

49. 1994 Polka Music Hall of Fame inductee WELK
The style of music with which bandleader Lawrence Welk was associated became known as “champagne music”. The term was coined by a dancer in the William Penn Hotel in Pittsburgh when Welk was appearing there with his band in the thirties.

51. Eastern holidays TETS
The full name for the New Year holiday in Vietnam is “Tet Nguyen Dan” meaning “Feast of the First Morning”, with the reference being to the arrival of the season of spring. Tet usually falls on the same day as Chinese New Year.

54. Landlocked Asian country NEPAL
Nepal lies to the northeast of India. Today, the state is known as the Federal Democratic Republic of Nepal. In 2008, the Communist Party of Nepal won the country’s general election. Soon after, the Assembly voted to change the form of government, moving away from a monarchy and creating a secular republic.

Over 80% of the land in Maine is forested, explaining perhaps why Maine has the nickname “the Pine Tree State”.

63. Most common dolphin BOTTLENOSE
Bottlenose dolphins have a very large brain to body mass ratio, second only to humans among mammals in general. Along with the brain-size comes high intelligence. Many dolphins have been trained to carry out military tasks, and then there is their acting ability, as exemplified by “Flipper”.

65. A.1., for one STEAK SAUCE
The original A.1. steak sauce comes from a recipe created for King George IV of England by one of his personal chefs in 1824. King George declared it to be “A.1.”, and the rest is history.

Down
2. Patriots’ Day mo. APR
Patriots’ Day is a public holiday observed in the states of Massachusetts, Maine and Wisconsin that commemorates the Battles of Lexington and Concord, the first engagements of the Revolutionary War. The battles took place in 1775, in April, and so the holiday is observed in that same month.

3. Home of the NCAA Engineers RPI
The Rensselaer Polytechnic Institute (RPI) is a private school in Troy, New York. The university is named after its founder Stephen Van Rensselaer who set up the school in 1824. The goal of RPI has always been the “application of science to the common purposes of life”, an objective set by the founder. Given that, the name for the school’s sports teams is quite apt: the Engineers.

9. Off-road traveler, for short UTE
A utility vehicle is often called a “ute” for short. Nowadays one mainly hears about sports utes and crossover utes.

10. Sitcom set in a garage TAXI
“Taxi” is a sitcom that aired in the late seventies and early eighties. “Taxi” was the big break for a host of great comic actors including Judd Hirsch, Jeff Conaway, Danny DeVito, Marilu Henner, Tony Danza, Christopher Lloyd and Andy Kaufman.

13. Assistance trio? ESSES
There are a trio (three) of letters S (ess) in the word “assistance”.

14. Hugo title word NOTRE
The title character in Victor Hugo’s novel “The Hunchback of Notre-Dame” is Quasimodo, the hunchbacked bell-ringer . Quasimodo falls for the beautiful Roma girl Esmeralda, and eventually rescues her just before she is due be hanged. He carries Esmeralda into Notre-Dame crying out “Sanctuary!” There is some recent evidence that a hunchbacked stone carver, working at Notre-Dame at the same time Hugo was alive, may have been the inspiration for the Quasimodo the bell-ringer.

21. Marine bioluminescence SEA FIRE
Some living organisms are able to produce light, a phenomenon known as “bioluminescence”. A famous example on land is the firefly, with its glowing tail. There are many marine animals, such as jellyfish, that emit light. The frequently observed bioluminescence on the surface of the sea is usually caused by plankton. This phenomenon may be referred to as “sea fire”.

23. Free-for-all MELEE
Our word “melee” comes from the French “mêlée”, and in both languages the word means “confused fight”.

31. Oregon Treaty president JAMES K POLK
James Knox Polk was the 11th US President. Polk is known as a president who delivered on promises that he made during his election campaign. He left office after serving only one term, as he had promised the voters, and then contracted cholera on a goodwill tour of the South. Polk died at only 53 years of age, the youngest age for any president to die in retirement. He also enjoyed the shortest retirement of any president, at only 103 days. I guess that’s why no one keeps their campaign promises these days …

The Oregon Treaty of 1846 settled a dispute between the US and the UK over sovereignty of the Oregon Country. “The Oregon Country” was the name given by the Americans to a large swathe of land west of the Rocky Mountains. That same disputed land was known as the Columbia Department by the British.

36. Diving ducks SMEWS
The smew is a beautiful-looking species of duck found right across northern Europe and Asia.

39. Ballerina Zakharova SVETLANA
The Ukrainian ballerina Svetlana Zakharova has been a principal dancer with tBolshoi Ballet since 2003.

Sydney is the most populous city in Australia. People from Sydney are known as “Sydneysiders”.

43. Team characteristic? SILENT A
There is a silent letter A in the word “team”.

47. Fancy footwear SPATS
Spats are footwear accessories that cover the ankle and instep. Spats were primarily worn by men, and originally had the purpose of protecting shoes and socks from mud or rain. Eventually, spats became a feature in stylish dress. The term “spats” is a contraction of “spatterdashes”.

48. “Exodus” actor MINEO
The actor Sal Mineo’s most famous role was John “Plato” Crawford, the kid who was in awe of the James Dean character in “Rebel Without a Cause”. Sadly, Mineo was murdered in 1976 when he was just 37 years old. He was attacked in the alley behind his Los Angeles apartment and stabbed through the heart. When an arrest was made it was discovered that the murderer had no idea that his victim was a celebrity, and that his plan was just to rob anyone who came along.

“Exodus” is a wonderful novel written by American writer Leon Uris, first published in 1947. The hero of the piece is Ari Ben Canaan, played by Paul Newman in the 1960 film adaptation directed by Otto Preminger.

55. Skunk River city AMES
The Skunk River in Iowa is a tributary of the Mississippi. The etymology of the river’s name is a little unclear, and is probably a mistranslation of the Sauk and Meskwaki name “Shecaqua”, which means “strong and obnoxious smell”. The headwaters of the Skunk River was known for its wild onions along the banks, hence the “odoriferous” reference. A better translation might have been “Onion River”.

60. White House advisory gp. NSC
The National Security Council (NSC) was created by President Harry S. Truman in 1947. The NSC is chaired by the sitting president and meets in the White House Situation Room.