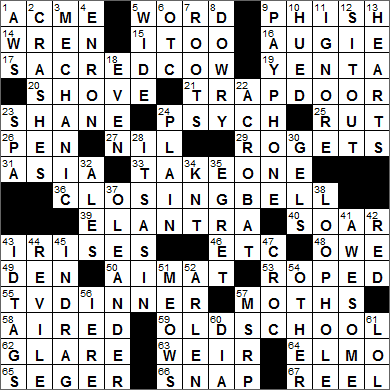 36A. Day ender on Wall Street … and, literally, what each answer to a starred clue has CLOSING BELL

Today’s Wiki-est, Amazonian Googlies
Across
1. Supplier of fake tunnels to Wile E. Coyote ACME
The Acme Corporation is a fictional company used mainly by Looney Tunes, and within the Looney Tunes empire it was used mostly in the “Road Runner” cartoons. Wile E. Coyote was always receiving a new piece of gear from Acme designed to finally capture the Road Runner, but the equipment always led to his downfall instead.

9. Attempt to scam using email PHISH
Phishing is the name given to the online practice of stealing usernames, passwords and credit card details by creating a site that deceptively looks reliable and trustworthy. Phishers often send out safe-looking emails or instant messages that direct someone to an equally safe-looking website where the person might inadvertently enter sensitive information. “Phishing” is a play on the word “fishing”, as in “fishing for passwords, PIN numbers etc.”

Saul Bellow was the only writer to have won the National Book Award three times, and won the Nobel Prize for Literature in 1976. Bellow was a Canadian-born American writer, and among his most famous works were “Herzog” and “Humboldt’s Gift”.

17. *One held above criticism SACRED COW (giving “cowbell”)
A “sacred cow” is something that is immune from criticism or questioning. The phrase alludes to the reverence for cows in the Hindu tradition. The use of figurative idiom seems to have originated in the late 1800s in the US.

23. 1953 Alan Ladd Western SHANE
The classic 1953 western movie called “Shane” was based on the novel of the same name by Jack Schaefer published in 1949. Alan Ladd had a rough end to his life. In 1962 he was found unconscious in a pool of blood with a bullet wound in his chest, an abortive suicide attempt. Two years later he was found dead, apparently having died from an accidental overdose of drugs and sedatives. He was 50 years old.

24. Subject in which Freud is studied, briefly PSYCH
Sigmund Freud was an Austrian neurologist, and founder of the psychoanalytic school of psychiatry. One of Freud’s tenets was that our dreams are a necessary part of sleep as they prevent the dreamer from awakening due to desire for unfulfilled wishes. The dream’s content represents those unfulfilled wishes and satisfies the desire.

26. Ballpoint, for one PEN
The ballpoint pen was invented by László Bíró in the late thirties, a Hungarian newspaper editor. Over in Ireland we use the term “biro” as a generic word for “ballpoint pen”.

29. Popular thesaurus ROGET’S
Peter Mark Roget was an English lexicographer. Roget was an avid maker of lists, apparently using the routine of list-making to combat depression, a condition he endured for most of his life. He published his famous thesaurus in 1852, with revisions and expansions being made years later by his son, and then in turn by his grandson.

36. Day ender on Wall Street … and, literally, what each answer to a starred clue has CLOSING BELL
The signal for the opening and closing of a trading session on the New York Stock Exchange (NYSE) is a bell. The original signal was a gavel, and then a gong. The gavel is still used, as well as the bell.

39. Hyundai sedan ELANTRA
The Elantra is a compact car made by Hyundai of South Korea. There was a long-standing dispute between Hyundai and manufacturers Lotus and Mitsubishi. Lotus contended that the Elantra name was too close the Lotus Elan, and Mitsubishi didn’t like the similarity to the Mitsubishi Elante.

43. Bearded spring blooms IRISES
Iris is a genus of flowering plants that come in a wide variety of flower colors. The term “iris” is a Greek word meaning “rainbow”. Many species of irises are called “flags”. One suggestion is that the alternate name comes from the Middle English “flagge” meaning “reed”. This term was used because iris leaves look like reeds.

53. Caught with a lasso ROPED
Our English word “lasso” comes from the Spanish “lazo”, and ultimately from the Latin “laqueum” meaning “noose, snare”.

55. *Swanson frozen meal TV DINNER (giving “dinner bell”)
The term “TV dinner”, which describes a prepackaged frozen meal, was actually a trademark for C. A. Swanson & Sons back in 1953. Swanson’s original prepackaged meal was sold as “TV Brand Frozen Dinner” and came in an aluminum tray so that it could be heated in an oven. Swanson stopped using the name in 1962 and now “TV dinner” is a generic term.

57. Closet pests MOTHS
The larvae of several types of moth are noted for eating fabrics made from natural fibers such as wool or cotton. Many people store woolens in cedar chests believing that the scent of the wood prevents a moth infestation. In fact, the only known effective repellent is the naphthalene found in mothballs, which might be a health concern for humans. One way to kill moth larvae in fabric is to freeze the garment for several days at a temperature below 8 degrees centigrade.

64. Giggly Muppet ELMO
The man behind/under the character Elmo on “Sesame Street” is Kevin Clash. If you want to learn more about Elmo and Clash, you can watch the 2011 documentary “Being Elmo: A Puppeteer’s Journey”.

65. “Night Moves” singer Bob SEGER
Bob Seger struggled as a performing artist right through the sixties and early seventies before becoming a commercial success in 1976 with the release of his album “Night Moves”. Since then, Seger has recorded songs that have become classics like, “We’ve Got Tonight” and “Old Time Rock & Roll”.

66. Ginger cookie SNAP
“Ginger snap cookies” are known as “ginger nut biscuits” back in Ireland where I come from …

Down
4. Scandal-plagued energy company ENRON
After all the trials following the exposure of fraud at Enron, several of the key players ended up in jail. Andrew Fastow was the Chief Financial Officer. He plea-bargained and received ten years without parole, and became the key witness in the trials of others. Even Fastow’s wife was involved and she was sentenced to one year for helping her husband hide money. Jeffrey Skilling (ex-CEO) was sentenced to 24 years and 4 months. Kenneth Lay (CEO) died in 2006 after he had been found guilty but before he could be sentenced. The accounting firm Arthur Andersen was found guilty of obstruction of justice for shredding thousands of pertinent documents and deleting emails and files (a decision that the Supreme Court later overturned on a technicality). But still, Arthur Andersen collapsed under the weight of the scandal and 85,000 people lost their jobs (despite only a handful being directly involved with Enron).

8. Bridal estate DOWRY
Originally, a dowry was money that was set aside by a man for his wife and children, to be used in the event that he passed away. A widow who receives said money was known as a “dowager”. Over time, “dowry” became a term used for the money, goods or estate that a woman brought into a marriage, and “dowager” came to mean an elderly woman with an elevated social position.

13. Valentine symbols HEARTS
Saint Valentine’s Day (February 14th) was chosen by Pope Gelasius I in 496 AD to honor various martyrs with the name Valentine. However, the saint’s day was dropped by the Roman Catholic church in 1969 by Pope Paul VI. Try telling that to Hallmark though …

35. “Snowy” bird EGRET
At one time the egret species of bird was in danger of extinction due to excessive hunting driven by the demand for plumes for women’s hats.

37. Poisonous ornamental OLEANDER
The oleander shrub or tree is extremely toxic, especially to humans and dogs. That said, rodents and birds seem to be relatively insensitive to the toxic compounds found in the plant.

45. Wearing opposite-sex clothing IN DRAG
The etymology of the term “drag”, as used in the transvestite world, seems to be unclear. It perhaps relates to the tendency of a transvestite’s skirts to drag along the ground in days of old (although why they just didn’t hitch up their skirts is beyond me!).

47. Gator cousin CROC
Crocodiles and alligators do indeed bear a resemblance to each other, although they belong to distinct biological families. One of the main ways used to distinguish them is by their teeth and jaws. Both the upper and lower sets of teeth of a crocodile are visible when its mouth is closed, whereas only the upper teeth of an alligator are visible with the mouth shut.

52. “Over the Rainbow” composer Harold ARLEN
Harold Arlen is a composer of popular music who will forever be associated with his composition “Over the Rainbow” from the movie “The Wizard of Oz”. Arlen also composed the music to “Come Rain or Come Shine”, “It’s Only a Paper Moon”, “Lydia the Tattooed Lady” and the wonderful “Stormy Weather”.

There is also a second chorus that was intended to be in the movie, but it ended up on the cutting room floor:

Someday I’ll wake and rub my eyes
And in that land beyond the skies,
You’ll find me
I’ll be a laughing daffodil
And leave the silly cares that fill
My mind behind me.

56. “Able was __ …”: palindrome start I ERE
The three most famous palindromes in English have to be: