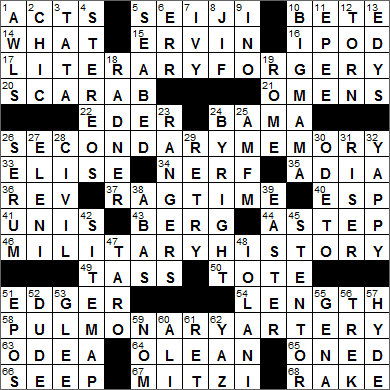 Today’s Wiki-est, Amazonian Googlies
Across
1. It precedes Romans ACTS
The Acts of the Apostles is the fifth book of the New Testament. It is believed that the author of the Gospel of Luke was the same person who wrote “Acts”.

5. Maestro Ozawa SEIJI
Seiji Ozawa is most famous for his work as music director of the Boston Symphony Orchestra, although he is also the principal conductor of the Vienna State Opera. Ozawa is renowned for wearing a white turtleneck under his dress suit when he conducts, rather than the traditional starched shirt and white tie.

15. ’50s-’70s senator who wrote “Humor of a Country Lawyer” ERVIN
Sam Ervin was a Democratic Senator from North Carolina, serving from 1954 until 1974. Senator Ervin worked on two notable committees during his term. On one he helped bring down Senator Joseph McCarthy in 1954, and on the other he helped investigate the Watergate scandal that brought down President Richard Nixon.

16. Shuffle, for one IPOD
The iPod Shuffle was introduced in 2005 and is the smallest of Apple’s line of audio players. The Shuffle was the first iPod to use flash memory.

20. Ancient amulet SCARAB
Scarabs were amulets in ancient Egypt. Scarabs were modelled on the dung beetle, as it was viewed as a symbol of the cycle of life.

24. Bear’s team BAMA
Bear Bryant was head coach for the University of Alabama (“Bama”) for almost 25 years, from 1958 to 1983. Sadly, Bryant passed away unexpectedly just a few weeks after he retired as Alabama coach.

33. Dedicatee of an 1810 piano manuscript ELISE
“Fur Elise” is a beautiful piece of music written by Beethoven, and is also known as “Bagatelle in A Minor”. “Fur Elise” means simply “For Elise”, but sadly no one knows for sure the identity of the mysterious dedicatee. The score was first published in 1867, four decades after Beethoven’s death in 1827. The original manuscript was dated 1810.

34. Brand that includes N-Strike blasters NERF
Nerf is the name given to the soft material used in a whole series of toys designed for “safe” play indoors. The Nerf product is used to make darts, balls and ammunition for toy guns. “NERF” is an acronym, standing for Non-Expanding Recreational Foam.

35. Sarah McLachlan song ADIA
Sarah McLachlan is singer/songwriter from Halifax, Nova Scotia who lives in Vancouver. In 1997, McLachlan married Ashwin Sood, the drummer in her band. Apparently the 1998 hit song “Adia”, that she co-wrote and recorded, was intended as an apology to her best friend … for stealing her ex-boyfriend and then marrying him!

37. Genre descended from the cakewalk RAGTIME
Ragtime music was at the height of it popularity in the early 1900s. It takes its name from its characteristic “ragged” rhythms. The most famous ragtime composer was Scott Joplin, who had a big hit with his “Maple Leaf Rag” when it was published in 1899. He followed that up with a string of hits, including the “Pine Apple Rag” (sic). Ragtime fell out of favor about 1917 when the public turned to jazz. It had a resurgence in the forties when jazz musicians started to include ragtime tunes in their repertoires. But it was the 1973 movie “The Sting” that brought the true revival, as the hit soundtrack included numerous ragtime tunes by Scott Joplin, including the celebrated “The Entertainer” originally published in 1902.

The Cakewalk is a dance that originated in the African American community from the “Prize Walk”, in the days of slavery. The Prize Walk was a procession in which couples “walked” with as much style as possible, with the intent of winning the big prize, a large cake. Our term “cakewalk”, meaning something easily accomplished, derives from this tradition. The expression “take the cake” has the same etymology.

41. Aussie colleges UNIS
In Australia (Down Under) and in the British Isles the term “uni” is routinely used for “university”.

43. “Lulu” composer BERG
Alban Berg was a composer from Austria. He was one of the members of what is called the Second Viennese School, along with Arnold Schoenberg and Anton Weber. This group embraced the concept of atonality, something which frankly is beyond me …

46. Part of West Point’s curriculum MILITARY HISTORY
West Point is a military reservation in New York State, located north of New York City. West Point was first occupied by the Continental Army way back in 1778, making it the longest, continually-occupied military post in the country. Cadet training has taken place at the garrison since 1794, although Congress funding for a US Military Academy (USMA) didn’t start until 1802. The first female cadets were admitted to West Point in 1976, and today about 15% of all new cadets are women.

49. Merged news agency TASS
“TASS” is the abbreviation used for the former news agency that had the full name Telegraph Association of the Soviet Union (Telegrafnoe Agentstvo Sovetskogo Soyuza). When the Soviet Union dissolved in 1992, the Moscow-based agency’s scope changed along with its name. It is now known as the Information Telegraph Agency of Russia (ITAR-TASS).

63. Classical theaters ODEA
In Ancient Greece an odeon (also “odeum”) was like a small theater, with “odeon” literally meaning a “building for musical competition”. Odea were used in both Greece and Rome for entertainments such as musical shows and poetry readings.

64. Southwestern New York city OLEAN
Olean is a city in New York State located on the Allegheny River. Louie Zamperini, the subject of the book and film called “Unbroken”, was born in Olean.

67. “South Pacific” co-star Gaynor MITZI
Mitzi Gaynor’s most famous role has to be Ensign Nellie Forbush in the movie adaptation of the musical “South Pacific”. It is Gaynor who sings the song “I’m Gonna Wash That Man Right Outa My Hair”.

68. Bunker tool RAKE
Sand traps on a golf course are referred to as “bunkers” on the other side of the Atlantic.

Down
2. Smart CHIC
“Chic” is a French word meaning “stylish”.

4. Man cave features STEREOS
“Man cave” is a slang term for a male sanctuary within a home, often a spare bedroom (as it is in our house) or a converted garage.

8. Smucker’s spread JIF
Jif is the leading brand of peanut butter in the US, and has been since 1981. Introduced in 1958, it is now produced by Smuckers.

9. Suffix with neutr- -INO
Neutrinos are small subatomic particles that do not carry an electric charge. The term “neutrino” is Italian for “small neutral one”, and was coined by physicist Enrico Fermi in 1932. There are three types of neutrino: electron neutrinos, muon neutrinos and tau neutrinos.

11. One-on-one sport EPEE
The sword known as an épée has a three-sided blade. The épée is similar to a foil and sabre, both of which are also thrusting weapons. However, the foil and saber have rectangular cross-sections.

13. Slow Churned ice cream EDY’S
Dreyers’ ice cream sells its products under the name Dreyers in the Western United States, and Edy’s in the Eastern states. The company’s founders were William Dreyer and Joseph Edy.

18. 1978 “SNL” Emmy winner RADNER
Gilda Radner was a comedian and actress, one of the original cast members of the hit television show “Saturday Night Live”. Radner left her first husband to marry comedic actor Gene Wilder, whom she met while they were both filming the Sidney Poitier movie “Hanky Panky”.

19. European capital ROME
The Italian capital of Rome is known as “The Eternal City”, a name given by ancient Roman poets and writers.

23. 1994 Stanley Cup winners RANGERS
The New York Rangers is an NHL team, one of the oldest in the league, having joined in 1926. When the Rangers won the Stanley Cup in 1928, they became the first American team to do so.

26. Hospital supply SERUM
Blood serum is the clear, yellowish part of blood i.e. that part which is neither a blood cell or a clotting factor. Included in blood serum are antibodies, the proteins that are central to our immune system. Blood serum from animals that have immunity to some disease can be transferred to another individual, hence providing that second individual with some level of immunity. Blood serum used to pass on immunity can be called “antiserum”.

27. Nicholas Gage memoir ELENI
Nicholas Gage is a Greek-American author and investigative journalist. Gage wrote two memoirs, “Eleni” and “A Place for Us”. “Eleni” tells of his life in Greece during WWII and the Greek Civil War. The title is a tribute to his mother Eleni who was executed by Communists who occupied her village, simply because she helped her children escape from the ravages of a war of occupation. “Eleni” was adapted into a movie in 1985, with John Malkovich playing Gage.

31. Flight segment RISER
The “riser” is the vertical part of a step in a flight of stairs.

45. Loud speaker STENTOR
Stentor was a figure in Greek mythology, a Greek herald during the Trojan War. He was noted for having a powerful voice, so today we describe someone with such a characteristic as “stentorian”. The original Stentor supposedly died after being defeated by Hermes in a shouting contest.

47. Poi source TARO
The corm of some taro plants is used to make poi, the traditional Hawaiian dish (that I think tastes horrible). When a taro plant is grown as an ornamental, it is often called Elephant Ears due to the shape of its large leaves.

48. Honolulu’s __ Palace ‘IOLANI
The ‘Iolani Palace in downtown Honolulu is unique within this country. It is the only royal palace in the US that was used as an official residence by a reigning monarch. The Kingdom of Hawaii was overthrown in 1893 so the palace was used by successive governments even after Hawaii was awarded statehood in 1959. The palace has been a public museum since 1978.

51. Long narrative poem EPOS
“Epos” is the Greek word for a story or a poem. We have absorbed it into English as “epic”, a long narrative poetic work describing heroic deeds and ventures.

55. Rowlands of “The Notebook” GENA
Gena Rowlands is an actress best known for the films made with her husband, actor and director John Cassavetes. More recently, Rowlands played a lead role opposite James Garner in the weepy, weepy 2004 film “The Notebook”. “The Notebook” was directed by her son, Nick Cassavetes. Rowlands was nominated for Oscars for her performances in two films: “Gloria” (1980) and “A Woman Under the Influence” (1974).

56. 94-day undertaking in the Cheryl Strayed memoir “Wild” TREK
The author Cheryl Strayed has written several successful books, most notably her 2012 memoir “Wild: From Lost to Found on the Pacific Crest Trail”. “Wild” was adapted into a 2014 film starring Reese Witherspoon as Strayed. I haven’t seen the film yet, but my wife had and really enjoyed it …

57. Classic fictional villain HYDE
Robert Louis Stevenson’s novella “The Strange Case of Dr. Jekyll and Mr. Hyde” was first published in 1886. There are many tales surrounding the writing of the story including one that the author wrote the basic tale in just three to six days, and spent a few weeks simply refining it. Allegedly, Stevenson’s use of cocaine stimulated his creative juices during those few days of writing.

60. “Prince __”: “Aladdin” song ALI
The Disney animated feature “Aladdin” was released in 1992 and is one of the best features to come out of the studio, in my opinion, largely due to the great performance by Robin Williams who voiced the Genie. “Aladdin” was the most successful film of 1992, earning over $500 million worldwide, an unusual feat for an animated movie.

62. Bosox legend YAZ
Yaz is the nickname for Carl Yastrzemski, who played his whole career with the Boston Red Sox.