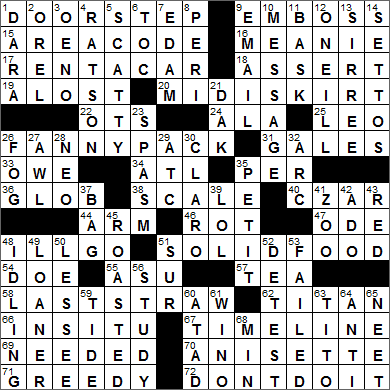 CROSSWORD SETTER: C.W. Stewart
THEME: Scale … the first letters of our themed answers today give us the solfa SCALE:

38A. Musical sequence found at the starts of the answers to the starred clues SCALE

1A. *Where deliveries may be left DOORSTEP
17A. *Airport pickup RENT-A-CAR
20A. *Modest garment MIDI SKIRT
26A. *Hiker’s pouch FANNY PACK
51A. *Infant’s dietary prohibition SOLID FOOD
58A. *Breaking point LAST STRAW
67A. *History book chart TIMELINE
72A. *Words of admonishment DON’T DO IT!

Today’s Wiki-est, Amazonian Googlies
Across
15. First three of ten digits AREA CODE
Area codes were introduced in the 1940s. Back then the “clicks” one heard when dialling a number led to mechanical wear on various pieces of equipment. In order to minimize overall mechanical wear, areas with high call volumes were given the most efficient area codes (lowest number of clicks). That led to New York getting the area code 212, Los Angeles 213 and Chicago 313.

17. *Airport pickup RENT-A-CAR
Avis was the first car rental company to locate a branch at an airport.

24. Influenced by, in recipes A LA
The phrase “in the style of” can be translated in “alla” in Italian and “à la” in French.

25. July baby, maybe LEO
Leo is the fifth astrological sign of the Zodiac. People born from July 23 to August 22 are Leos.

26. *Hiker’s pouch FANNY PACK
In the British Isles, a “fanny pack” is called a “bum bag”. The use of the word “bum” is considered more polite than the word “fanny”, which has a very rude meaning in that part of the world.

34. NFC South team ATL
The Atlanta Falcons joined the NFL in 1965. The team name was suggest by a school teacher called Miss Julia Elliott. Elliot suggested that “the Falcon is proud and dignified, with great courage and fight. It never drops its prey. It is deadly and has a great sporting tradition.”

35. Part of rpm PER
Revolutions per minute (rpm)

38. Musical sequence found at the starts of the answers to the starred clues SCALE
The solfa syllables are: do, re, mi, fa, sol, la & ti. The solfa scale was developed from a six-note ascending scale created by Guido of Arezzo in the 11th century. He used the first verse of a Latin hymn to name the syllables of the scale:

The “ut” in this scale was changed to “do”, as it was a more “open ended” sound, and “si” was added (the initials of “Sancte Iohannes”) to complete the seven-note scale. Later again, “si” was changed to “ti” so that each syllable began with a unique letter.

40. Authoritarian figure CZAR
The term czar (also tsar) is a Slavic word that was first used as a title by Simeon I of Bulgaria in 913 AD. “Czar” is derived from the word “Caesar”, which was synonymous with “emperor” at that time.

46. Balderdash ROT
“Balderdash” means “senseless jumble of words”. The original balderdash (back before the late 1600s) was a jumbled mix of liquids, like maybe beer and wine, or even beer and milk!

55. Sun Devils of the Pac-12 ASU
Arizona State University (ASU) has a long history, founded as the Tempe Normal School for the Arizona Territory in 1885. The athletic teams of ASU used to be known as the Normals, then the Bulldogs, and since 1946 they’ve been called the Sun Devils.

62. Giant TITAN
The Titans were a group of twelve older deities in Greek mythology. In the celebrated Battle of the Titans, they were overthrown by the Olympians, who were twelve younger gods. We use the term “titan” figuratively to describe a powerful person, someone with great influence.

66. Where it originally was IN SITU
“In situ” is a Latin phrase meaning “in the place”, and we use the term to mean “in the original position”.

70. Cordial with a licorice-like flavor ANISETTE
Anisette is a French liqueur that is flavored with anise. Anisette is different than the popular drink called Pastis as it is produced using a different process and anisette does not contain any licorice. The equivalent drink to anisette in Italy is called Sambuca.

2. Pitcher Hershiser OREL
Orel Hershiser is big into poker now that he has retired from Major League Baseball. Hershiser lives in Las Vegas and when he isn’t working for ESPN, apparently he is at the poker tables, playing professionally. When Hershiser is eliminated in a poker tournament, he is in the habit of presenting the person who ousts him with an autographed baseball.

3. Wine lover’s prefix OENO-
In Greek mythology, Oeno was the goddess of wine, giving us “oen-” as a prefix meaning “wine”. For example, oenology is the study of wine and an oenophile is a wine-lover.

5. Absent-minded, to a Brit SCATTY
“Scatty” is an adjective used in Britain to mean “scatterbrained”.

7. Red-coated cheese EDAM
Edam cheese takes its name from the Dutch town of Edam in North Holland. The cheese is famous for its coating of red paraffin wax, a layer of protection that helps Edam travel well and prevents spoiling. You might occasionally come across an Edam cheese that is coated in black wax. The black color indicates that the underlying cheese has been aged for a minimum of 17 weeks.

8. Prefix with scope PERI-
The prefix “peri-” is Greek in origin and means “around”. An example of its use is “periscope”, a device on a submarine for looking “around”.

11. Get some rays BASK
Our verb “to bask”, meaning “to expose one to pleasant warmth”, is derived from the gruesome 14th-century term “basken”, meaning “to wallow in blood”. The contemporary usage apparently originated with Shakespeare, who employed “bask” with reference to sunshine in “As You Like It”.

12. “The Hairy Ape” playwright O’NEILL
“The Hairy Ape” is a play by Eugene O’Neill, and tells of a laborer on an ocean liner who leaves the ship and tries to make his way in Manhattan. He finds it hard to fit in, and finds most empathy with a gorilla in the zoo who he regards as a kindred spirit. At the end of the play, the hero dies in the arms of the gorilla.

21. Divided terr. DAK
The Dakota Territory was formed in 1861 and ceased to exist with the admission to the Union of the states of North Dakota and South Dakota. The territory was split into two states in 1889 largely due to lobbying by the Republican Party, which enjoyed a lot of support in the Dakota Territory. The admission of two states added to the political power of the party in the US Senate, by adding four safe Republican seats.

26. Weather condition in the final scene of “Casablanca” FOG
The movie “Casablanca” was released in January of 1943, timed to coincide with the Casablanca Conference, the high-level meeting between Roosevelt and Churchill. The film wasn’t a box-office hit, but gained critical acclaim, winning three Oscars including Best Picture. The signature song “As Time Goes By” was written many years earlier for a 1931 Broadway musical called “Everybody’s Welcome”, and was a hit in 1931 for Rudy Vallee. But today we all remember the Casablanca version, sung by Dooley Wilson (who played “Sam” in the film). Poor Dooley didn’t get to record it as a single, due to a musician’s strike in 1943, so the 1931 Rudy Vallee version was re-released that year and became an even bigger hit second time round.

28. Opposite of paleo- NEO-
The prefix “paleo-” means “prehistoric, primitive”. It comes from the Greek word “palaios” which means “old, ancient”. The prefix “neo-” would be the opposite, meaning “new, recent”.

30. Light cigar wrapper CLARO
A claro is mild cigar made with light-colored tobacco. The name “claro” comes from the Spanish for “clear”. The term “claro” is also used for a light tan tobacco leaf used as a cigar wrapper.

41. Menagerie ZOO
A “menagerie” is a varied group, and particularly refers to a collection of wild or unusual animals. The term comes from the French “ménagerie”, which described housing for domestic animals.

51. California’s Big __ SUR
Big Sur is a lovely part of the California Coast, south of Monterey and Carmel. The name “Big Sur” comes from the original Spanish description of the area as “el sur grande” meaning “the big south”.

60. Minimally A TAD
Back in the 1800s “tad” was used to describe a young child, and this morphed into our usage of “small amount” in the early 1900s. The original use of “tad” for a child is very likely a shortened version of “tadpole”.

61. Skid row regular WINO
The term “skid row” is used to describe a run-down urban neighborhood. “Skid row” appears to have originated in the Pacific Northwest where a “skid road” was a wooden pathway used for “skidding” logs through forests and over bogs. The terms “skid road” and “skid row” came to be used for logging camps and mills, and then somehow was applied to run-down areas in cities up and down the west coast of North America.

63. Jackson 5 brother TITO
Tito Jackson was the third oldest of the Jackson children, and was known in Motown as the “quiet Jackson”.

65. Discontinued depilatory NEET
The hair removal product “Neet” was launched in Canada in 1901, and was also sold as “Immac”. Today it is sold under the name “Veet”.