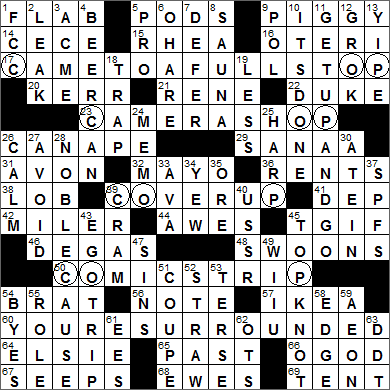 60A. Warning about sealed-off escape routes from the police, four of whom are aptly positioned in this puzzle’s circles YOU’RE SURROUNDED!

17A. Obeyed the corner traffic sign CAME TO A FULL STOP
23A. Place to buy a Nikon CAMERA SHOP
39A. Conceal, as misdeeds COVER UP
50A. “For Better or for Worse,” e.g. COMIC STRIP

The Pampas are fertile lowlands covering a large part of Argentina, Uruguay and some of Brazil. “Pampa” is a Quechua word meaning “plain”.

16. Cheri of “SNL” OTERI
Cheri Oteri was the “Saturday Night Live” (SNL) cast member who regularly appeared with Will Ferrell in the skit featuring a pair of Spartan cheerleaders.

20. Coach Steve of the NBA champion Golden State Warriors KERR
Steve Kerr is a retired NBA basketball player who moved into team management. Kerr was born in Beirut, Lebanon, the son of an American academic who specialized in Middle East studies. Kerr’s father was assassinated by militant nationalists in Beirut when Steve was 19 years old.

21. Philosopher Descartes RENE
The great French philosopher Rene Descartes made the famous statement in Latin, “Cogito ergo sum”. This translates into French as “Je pense, donc je suis” and into English as “I think, therefore I am”.

22. North Carolina university DUKE
Duke University was founded in 1838 as Brown’s Schoolhouse. The school was renamed to Trinity College in 1859, and to this day the town where the college was located back then is known as Trinity, in honor of the school. The school was moved in 1892 to Durham, North Carolina in part due to generous donations from the wealthy tobacco industrialist Washington Duke. Duke’s donation required that the school open its doors to women, placing them on an equal footing with men. Trinity’s name was changed to Duke in 1924 in recognition of the generosity of the Duke family. Duke’s athletic teams are known as the Blue Devils.

23. Place to buy a Nikon CAMERA SHOP
Nikon was founded in 1917 with the merger of three companies making various optical devices. After the merger, the company’s main output was lenses (including the first lenses for Canon cameras, before Canon made its own). During the war, Nikon sales grew rapidly as the company focused on (pun!) equipment for the military including periscopes and bomb sights.

26. Hors d’oeuvres bit CANAPE
A canapé is a finger food, usually small enough to eat in just one bite. In French, “canapé” is actually the word for a couch or a sofa. The name was given to the snack as the original “canapés” were savories served on toasted or stale bread that supposedly resembled a tiny “couch”.

29. Capital of Yemen SANAA
Sana (also Sanaa) is the capital city of Yemen. Within the bounds of today’s metropolis is the old fortified city of Sana, where people have lived for over 2,500 years. The Old City is now a World Heritage Site.

31. Cosmetics giant AVON
In 1886, a young man called David McConnell was selling books door-to-door. To enhance his sales numbers he was giving out free perfume to the ladies of the houses that he visited. Seeing as his perfume was more popular than his books, he founded the California Perfume Company in New York City and started manufacturing and selling across the country. The company name was changed to Avon in 1939, and the famous “Avon Calling” marketing campaign was launched in 1954.

32. Turkey club spread MAYO
Mayonnaise originated in the town of Mahon in Menorca, a Mediterranean island belonging to Spain. The Spanish called the sauce “salsa mahonesa” after the town, and this morphed into the French word “mayonnaise” that we use in English today.

45. “I’m ready for the weekend!” TGIF!
“Thank God It’s Friday” (TGIF) is a relatively new expression that apparently originated in Akron, Ohio. It was a catchphrase used first by disk jockey Jerry Healy of WAKR in the early seventies. That said, one blog reader wrote me to say that he had been using the phrase in the fifties.

46. Ballerina artist Edgar DEGAS
Edgar Degas was a French artist, famous for his paintings and sculptures. Some of Degas’ most beautiful works feature female ballet dancers, and others depict women bathing.

64. Cow on a dairy container ELSIE
Elsie the Cow is the mascot of the Borden Company. Elsie first appeared at the New York World’s Fair in 1939, introduced to symbolize the perfect dairy product. Elsie was also given a husband named Elmer the Bull. Elmer eventually moved over to the chemical division of Borden where he gave his name to Elmer’s Glue.

Down
1. TV/radio-regulating agcy. FCC
The Federal Communications Commission (FCC) has been around since 1934, when it replaced the Federal Radio Commission.

6. Windy City hub O’HARE
Chicago’s O’Hare International is the busiest airport in the world in terms of takeoffs and landings. The original airport was constructed on the site between 1942 and 1943, and was used by the Douglas Aircraft Company for the manufacture of planes during WWII. Before the factory and airport were built, there was a community in the area called Orchard Place, so the airport was called Orchard Place Airport/Douglas Field. This name is the derivation of the airport’s current location identifier: ORD (OR-chard D-ouglas). Orchard Place Airport was renamed to O’Hare International in 1949 in honor of Lieutenant Commander Butch O’Hare who grew up in Chicago. O’Hare was the US Navy’s first flying ace and a Medal of Honor recipient in WWII.

8. Steamy room SAUNA
As my Finnish-American wife will tell you, “sauna” is a Finnish word, and is correctly pronounced “sow-nah” (with “sow” as in the female pig).

12. Grasp intuitively, in slang GROK
“To grok” is to understand, a slang word that’s really only used in “techie” circles. “Grok” is the creation of science fiction author Robert Heinlein, who coined the term in his 1961 novel “Stranger in a Strange Land”.

24. Message to employees MEMO
“Memorandum” means “thing to be remembered” in Latin, from the verb “memorare” meaning “to call to mind”.

33. Actress Gardner AVA
Ava Gardner is noted for her association with some big movies, but also for her association with some big names when it came to the men in her life. In the world of film, she appeared in the likes of “Mogambo” (1953), “On the Beach” (1959), “The Night of the Iguana” (1964) and “Earthquake” (1974). The men in her life included husbands Mickey Rooney, Artie Shaw and Frank Sinatra. After her marriages had failed (and perhaps before!) she had long-term relationships with Howard Hughes and bullfighter Luis Miguel Dominguin whom she met through her friend Ernest Hemingway.

34. Fine-grained wood YEW
The family of trees known as yews propagate by producing a seed surrounded by soft, sweet and brightly colored aril. Birds eat the fruit and then disperse the seed in their droppings. The birds leave the seed undamaged, and so are unharmed by the potent poisons taxine and taxol that are found within the seed. The seeds are highly toxic to humans.

37. Sunscreen nos. SPFS
In theory, the sun protection factor (SPF) is a calibrated measure of the effectiveness of a sunscreen in protecting the skin from harmful UV rays. The idea is that if you wear a lotion with say SPF 20, then it takes 20 times as much UV radiation to cause the skin to burn than it would take without protection. I say just stay out of the sun …

40. Amer. ally in WWII USSR
At the outset of WWII in 1939, the Soviet Union and Nazi Germany signed a nonaggression treaty. When the Germans invaded Poland, the Russians did the same thing a few weeks later, helping to complete the defeat of the Polish military. Soon after, the Soviets invaded Finland, a move that angered France and the UK who deemed that the USSR was entering the war on the side of the Nazis. There followed a trade pact between Germany and the Soviet Union. When the Japan, Italy and Germany formally established the Axis Powers, they declared that an attack on any of the three members by any country other than the USSR would be an act of war against all three. In 1940, Hitler made perhaps the worst decision of the war for Nazi Germany, by ordering German military forces to invade Russia. The resulting Eastern Front of WWII saw the 30 million deaths, out of a total of 70 million for the whole conflict.

51. Sporty wheels COUPE
The type of car known as a “coupe” or “coupé” is a closed automobile with two doors. The name comes from the French word “couper” meaning “to cut”. In most parts of the English-speaking world the pronunciation adheres to the original French, but here in most of North America we go with “coop”. The original coupé was a horse-drawn carriage that was cut (coupé) to eliminate the rear-facing passenger seats. That left just a driver and two front-facing passengers. If the driver was left without a roof and out in the open, then the carriage was known as a “coupé de-ville”.

54. What top seeds may get in tournaments BYES
A team or player can get a bye into the next round of a tournament, meaning there’s no need to play in the current round. This can perhaps happen because an opposing player/team fails to turn up, or maybe because there aren’t enough teams to make the first round. Sometimes seeded players are awarded a bye and are automatically in a tournament.

63. Banned pesticide DDT
DDT is dichlorodiphenyltrichloroethane (don’t forget now!). DDT was used with great success to control disease-carrying insects during WWII, and when made available for use after the war it became by far the most popular pesticide. And then Rachel Carson published her famous book “Silent Spring”, suggesting there was a link between DDT and diminishing populations of certain wildlife. It was the public outcry sparked by the book, and reports of links between DDT and cancer, that led to the ban on the use of the chemical in 1972. That ban is touted as the main reason that the bald eagle was rescued from near extinction.