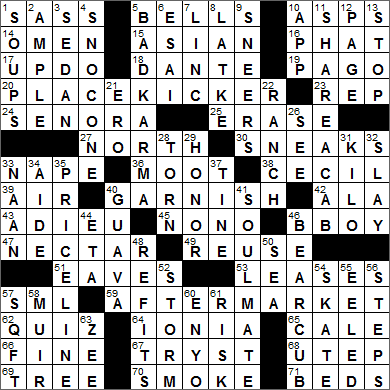 CROSSWORD SETTER: Janice Luttrell
THEME: Aftermarket … each of today’s themed answers starts with a word that is often seen AFTER MARKET:

59A. Secondary business venue, as for auto accessories … and, literally, where the starts of the answers to starred clues can go AFTERMARKET

Today’s Wiki-est, Amazonian Googlies
Across
10. Vile Nile snakes ASPS
The asp is a venomous snake found in the Nile region of Africa. It is so venomous that the asp was used in ancient Egypt and Greece as a means of execution. Cleopatra observed such executions noting that the venom brought on sleepiness without any painful spasms. When the great queen opted to commit suicide, the asp was therefore her chosen method.

14. Harbinger OMEN
A harbinger is a person or a thing that indicates what is to come. The word comes from the Middle English “herbenger”, a person sent ahead to arrange lodgings.

18. “Abandon all hope, ye who enter here!” poet DANTE
Dante Alighieri’s “Divine Comedy” is an epic poem dating back to the 14th century. The first part of that epic is “Inferno”, which is the Italian word for “Hell”. In the poem, Dante is led on a journey by the poet Virgil, starting at the gates of Hell on which are written the famous words “Abandon all hope, ye who enter here”.

19. When doubled, American Samoa’s capital PAGO
Pago Pago is the capital of American Samoa in the South Pacific. The island was used by the US Navy during WWII and it managed to escape most of the conflict. The only military incident of consequence was the shelling of the city’s harbor by a Japanese submarine. A more devastating event was the tsunami that hit Pago Pago and surrounding areas in 2009, causing widespread damage and numerous deaths.

23. GOP member REP
The Republican Party has had the nickname Grand Old Party (GOP) since 1875. That said, the phrase was coined in the “Congressional Record” as “this gallant old party”. The moniker was changed to “grand old party” in 1876 in an article in the “Cincinnati Commercial”. The Republican Party’s elephant mascot dates back to an 1874 cartoon drawn by Thomas Nast for “Harper’s Weekly”. The Democrat’s donkey was already an established symbol. Nast drew a donkey clothed in a lion’s skin scaring away the other animals. One of the scared animals was an elephant, which Nast labeled “The Republican Vote”.

24. Woman of la casa SENORA
In Spanish, the lady of “la casa” (the house) might be referred to as “Señora”.

27. __ Dakota NORTH
North Dakota’s state capital is Bismarck, and the largest city is Fargo. The list of state nicknames includes the Peace Garden State, the Roughrider State and the Flickertail State.

38. Director DeMille CECIL
Cecil B. Demille was a movie director and producer who started his professional career in the silent era. DeMille’s movies were often epic works, such “Cleopatra” (1936), “Samson and Delilah” (1949), “The Greatest Show on Earth” (1952) and “The Ten Commandments” (1956). The Golden Globe Cecil B. DeMille Award is named in his honor, and indeed he was its first recipient.

42. In the style of A LA
The phrase “in the style of” can be translated in “alla” in Italian and “à la” in French.

46. Rap fan B-BOY
A b-boy is a male fan of rap-music and breakdancing. Apparently the term comes from either “Bronx boy” or “break boy”.

47. Hummingbird’s diet NECTAR
Hummingbirds are the smallest of all the birds. The species known as the Bee Hummingbird is native to Cuba and weighs less than a tenth of an ounce and is about two inches in length!

51. House overhangs EAVES
The eaves are the overhanging edges of a roof that project beyond the supporting wall. The term “eaves” evolved from the Old English “efes” meaning “edge.

64. Ancient region of present-day Turkey IONIA
The geographic region called Ionia is located in present day Turkey. Ionia was prominent in the days of Ancient Greece although it wasn’t a unified state, but rather a collection of tribes. The tribal confederacy was more based on religious and cultural similarities than a political or military alliance. Nowadays we often refer to this arrangement as the Ionian League.

67. Lovers’ meeting TRYST
In its most general sense, a tryst is a meeting at an agreed time and place. More usually we consider a tryst to be a prearranged meeting between lovers. The term comes from the Old French “triste”, a waiting place designated when hunting.

68. Sch. near the Rio Grande UTEP
The University of Texas at El Paso (UTEP) was founded in 1914, originally as the Texas State School of Mines and Metallurgy. To this day there is a mine shaft on the campus, and the mascot of the school’s sports teams is Paydirt Pete, a prospector from the mining industry. The teams are also known as the UTEP Miners and Lady Miners.

Down
3. Family car SEDAN
The American “sedan” car is the equivalent of the British “saloon” car. By definition, a sedan car has two rows of seating and a separate trunk (boot in the UK), although in some models the engine can be at the rear of the car.

4. Ice-cream truck treat SNO-CONE
A sno-cone (also “snow cone”) is just a paper cone filled with crushed ice and topped with flavored water. Italian ice is similar, but different. Whereas the flavoring is added on top of the ice to make a sno-cone, Italian ice is made with water that is flavored before it is frozen.

5. Consequence of selfish acts, some say BAD KARMA
Karma is religious concept with its basis in Indian faiths. Karma embraces the notion of cause and effect. Good deeds have good consequences at some later point in one’s life, future life, or afterlife and vice versa.

6. Actor Morales ESAI
The actor Esai Morales is best known for his role in the 1987 movie “La Bamba”, which depicted the life of Ritchie Valens and his half-brother Bob Morales (played by Esai).

7. “The Mod Squad” role LINC
The 1999 movie “The Mod Squad” was an adaptation of the seventies television show of the same name. The part of Lincoln “Linc” Hayes was played by Omar Epps, Claire Danes played Julie Barnes and Giovanni Ribisi played Peter Cochran.

8. Hanukkah pancake LATKE
A latke is a delicious potato pancake (I’m Irish … so anything made with potato is delicious!).

The term “Hanukkah” derives from the Hebrew for “to dedicate”. Hanukkah is a holiday lasting eight days that commemorates the rededication of the Holy Temple of Jerusalem after successful Jewish revolt against the Seleucids in the 2nd-century BCE. The story of Hanukkah includes the miracle of the one-day supply of oil actually kept the menorah alight for eight days.

21. Suffix with 22-Down -ERO
22. Cowboy’s home RANCH
A ranchero is someone employed on a ranch, and is a word with Spanish roots.

31. Narc’s discovery KILO
“Narc” (from “narcotics”) is a slang term for a law enforcement officer who tracks down criminals associated with illegal drugs.

33. Tandoori flatbread NAAN
Naan (also “nan”) bread is very popular in Indian restaurants, as well as in other West, Central and South Asian cuisines. Indian Naan is traditionally baked in a clay oven known as a tandoor.

William Shatner is a Canadian actor, famous for playing Captain James T. Kirk in the original “Star Trek” television series. Shatner was trained as a classical Shakespearean actor, and appeared on stage in many of the Bard’s works early in his career. While playing the Kirk character, he developed a reputation for over-acting, really emphasizing some words in a speech and using an excessive number of pauses. He gave his name to the word “shatneresque”, which describes such a style.

55. Sought morays EELED
Morays are a large group of about 200 species of eels found across the world’s oceans. They are carnivorous and look pretty scary but they’re quite shy when confronted and present no threat to humans. One interesting thing about morays is that they will sometimes work in cooperation with the grouper fish found in reefs, the two helping each other hunt for food.

58. Sierra Club founder John MUIR
John Muir was a famous American naturalist, although he was born in Scotland. He published “My First Summer in the Sierra” in 1911, describing one of his favorite places in the country, the Sierra Nevada range in California. Muir was a co-founder of the Sierra Club.

60. Greek war goddess ENYO
Enyo was a Greek goddess of war, a companion to the war god Ares. Enyo was also the sister of Ares, and the daughter of Zeus and Hera.

63. New York’s Tappan __ Bridge ZEE
The Tappan Zee is a 10-mile stretch of the Hudson River in New York, a place where there is a widening of the waterway. The name comes from the Tappan Native American people and the Dutch word “zee” meaning “sea” or “wide expanse of water”. The Tappan Zee Bridge is more correctly called the Governor Malcolm Wilson Tappan Zee Bridge which crosses the Hudson River in New York. The bridge opened in 1955 and is showing its age. There are plans to replace it with a new bridge due to open in 2017.