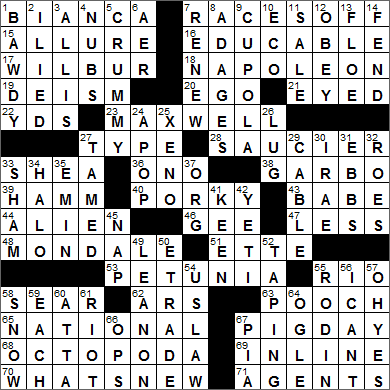 CROSSWORD SETTER: Jeffrey Wechsler
THEME: Pigs … today is NATIONAL PIG DAY, and so our grid is replete with famous PIGS:

65A. With 67-Across, annual March 1 event celebrated in the answers to starred clues NATIONAL
67A. See 65-Across PIG DAY

17. *Whom Charlotte saved, in an E.B. White classic WILBUR
“Charlotte’s Web” is a children’s novel by author E. B. White. Charlotte is a barn spider, who manages to save the life of a pig named Wilbur. Wilbur is a pet pig, owned by the farmer’s daughter, Fern Arable. The story also includes a gluttonous rat named Templeton who provides some light and comical moments.

“Animal Farm” is the 1945 novella written by George Orwell, a satire of life in the Soviet Union under Joseph Stalin. Orwell had trouble getting his novel published in his homeland of the UK during WWII, as anti-Soviet literature wasn’t a good thing to publish while the UK and USSR were on the same side of a World War. In fact, one publisher who was willing to distribute the book changed his mind after being warned off by the British Ministry of Information. Given his experiences, I find it interesting that Orwell should write “Nineteen Eighty-Four” a few years later, and introduce the world to Big Brother.

21. One-__ jack EYED
In a deck of cards, both the jack of spades and the jack of hearts are “one-eyed jacks”.

GEICO was founded in 1936 with a very specific mission, to provide auto insurance for employees of the federal government and their families, hence the name Government Employees Insurance Company (GEICO). GEICO is a private company, despite the word “government” in its name. The founders’ idea was focus on government employees as they believed such a group represented a lower risk profile than the rest of the population. Nowadays anyone can go with GEICO, which is 100% owned by Berkshire Hathaway, Warren Buffett’s investment firm.

33. Mets’ former stadium SHEA
Shea Stadium in Flushing Meadows, New York was named after William A. Shea, the man credited with bringing National League baseball back to the city in the form of the New York Mets. Shea Stadium was dismantled in 2008-2009, and the site now provides additional parking for the new stadium nearby called Citi Field.

36. Singer Yoko ONO
Yoko Ono is an avant-garde artist. Ono actually met her future husband John Lennon for the first time while she was preparing her conceptual art exhibit called “Hammer a Nail”. Visitors were encouraged to hammer in a nail into a wooden board, creating the artwork. Lennon wanted to hammer in the first nail, but Ono stopped him as the exhibition had not yet opened. Apparently Ono relented when Lennon paid her an imaginary five shillings to hammer an imaginary nail into the wood.

38. “Ninotchka” star Greta GARBO
“Ninotchka” is a 1939 movie starring Greta Garbo in the title role. The film is a comedy, and was the second-to-last film in which Garbo appeared. “Ninotchka” was the only full comedy that Garbo made in her career, and was marketed with the line “Garbo Laughs!”

40. *Stutterer in Looney Tunes sign-offs PORKY
Porky Pig was the first of the characters created by Warner Bros. to become a hit with audiences. Porky Pig is the guy with the line at the end of each cartoon, “Th-th-th-that’s all folks!” If you don’t mind a little adult language, there’s a very funny 11-second Porky Pig clip that the studio released on a blooper reel in 1938. Porky Pig stutters out “Son of g-g-gun”, only he doesn’t say “gun” …

43. *Unlikely title shepherd in a 1995 film BABE
The hit 1995 film “Babe” was produced and filmed in Australia. The movie is an adaptation of a 1983 novel called “The Sheep-Pig” written by Dick King-Smith. “Babe” was a smash hit at the box office and was extremely well received by the critics. The film was nominated for the Best Picture Oscar, but lost out to “Braveheart”. However, it did win the Oscar for Best Visual Effects by beating out “Apollo 13”, which was an amazing feat, I’d say…

44. Reputed UFO pilot ALIEN
In 1952, the USAF revived its studies of reported sightings of unidentified flying objects (UFOs) in a program called Project Blue Book. Project Blue Book ran from 1952 until it was shut down in 1969 with the conclusion that there was no threat to national security and that there were no sightings that could not be explained within the bounds of modern scientific knowledge.

The first light beer was produced by Chicago’s Meister Brau brewery in the sixties. Miller took over Meister Brau, reformulated the light beer using the same process and became the first of the big breweries to come out with a light beer, “Lite Beer from Miller” introduced in 1973. There really wasn’t a serious competitor to Miller Lite until Anheuser-Busch finally came up with a process and a product in 1982 that they called Bud Light.

48. Carter’s vice president MONDALE
Walter Mondale served as US Vice president under President Jimmy Carter. Mondale was also the Democratic candidate who lost to President Ronald Reagan in 1984, losing in the biggest landslide in the country’s history. Mondale only won electoral votes in his home state of Minnesota and the District of Columbia.

53. *40-Across’ gal PETUNIA
Petunia Pig is a cartoon character in the “Looney Tunes” and “Merrie Melodies” universes. Petunia is the girlfriend of Porky Pig and has been around since 1937.

65. With 67-Across, annual March 1 event celebrated in the answers to starred clues NATIONAL
67. See 65-Across PIG DAY
We’ve been celebrating National Pig Day since 1972. The pig doesn’t do too well out of the celebration though, as there is a lot of pork served at “pig parties”.

68. Biological order including eight-armed creatures OCTOPODA
The most famous octopod (“eight-footed” mollusc) is the octopus.

71. FBI operatives AGENTS
What we know today as the FBI was set up in 1908 as the BOI, the Bureau of Investigation. The name was changed to the Federal Bureau of Investigation in 1935. The Bureau was set up at the behest of President Theodore Roosevelt. President Roosevelt was largely moved to do so after the 1901 assassination of President McKinley, as there was a perception that anarchists were threatening law and order. The FBI’s motto uses the organization’s initialism, and is “Fidelity, Bravery, Integrity”.

Down
3. “Silent Night” words before calm and bright ALL IS
The beautiful Christmas Carol “Silent Night” was first performed in Austria in 1818, with words by a priest, Father Joseph Mohr, and melody by an Austrian headmaster, Franz Xaver Gruber. The carol was in German and called “Stille Nacht”. The English translation that we use today was provided to us by an American bishop in 1859, John Freeman Young from Florida.

4. Used-up pencils NUBS
A much-used pencil might be worn down to a nub.

6. __ Lingus AER
Aer Lingus is my favorite airline! Well, the service isn’t that great, but when I get on board an Aer Lingus plane I feel like I am back in Ireland. Aer Lingus is the national airline of Ireland, with “Aer Lingus” being a phonetic spelling of the Irish “aer-loingeas” meaning “air fleet”. These days Aer Lingus can only lay claim to the title of Ireland’s oldest airline as it is no longer the biggest. That honor goes to the controversial budget airline called Ryanair.

7. Take more Time? RENEW
“Time” magazine has a readership of about 25 million, making it the largest circulation weekly news magazine in the world.

8. Maxims ADAGES
Our word “maxim” meaning “precept, principle” has been around since the early 1600s. It ultimately derives from the Latin phrase “maxima propositio”, which translates as “greatest premise”.

9. Domelike building top CUPOLA
A cupola is a small domelike structure on the top of a building. “Cupola” comes from the Latin “cupula” meaning “small cup”.

11. Mall event SALE
Surprisingly, our word “mall”, meaning “shady walk” or “enclosed shopping space”, comes from the Italian for “mallet”. All of our shopping-style malls are named for “The Mall” in St. James’s Park in London. This tree-lined promenade was so called as it used to a famous spot to play the croquet-like game called “pall-mall”. The game derived its name from the Italian for ball (palla) and mallet “maglio”. The London thoroughfare called the Mall still exists, at one end of which is Buckingham Palace. Indeed, parallel to the Mall is a street called Pall Mall.

13. Arctic chunk FLOE
An ice floe is a sheet of ice that has separated from an ice field and is floating freely on the ocean.

30. “Dies __”: Latin hymn IRAE
“Dies Irae” is Latin for “Day of Wrath”. It is the name of a famous melody in Gregorian Chant, one that is often used as part of the Roman Catholic Requiem Mass.

32. Some reddish deer ROES
Roe deer are found mainly in Europe. They would be the deer shown on television and in movies when Robin Hood was out hunting in Sherwood Forest.

33. Bedding accessory SHAM
A “sham” is something that is imitation, fake. In the world of bed linens a sham is also imitation and fake, in the sense that it is a decorative cover designed to cover up a regular pillow used for sleeping.

42. Bigfoot kin YETI
A yeti is a beast of legend, also called an abominable snowman. “Yeti” is a Tibetan term, and the beast is fabled to live in the Himalayan regions of Nepal and Tibet. Our equivalent legend in North America is that of Bigfoot, also known as Sasquatch. The study of animals whose existence have not yet been substantiated is called cryptozoology.

50. Online investment service E*TRADE
E*Trade is mainly an online discount brokerage. It was founded in 1982 in Palo Alto, California, and I used to drive by its headquarters almost every day. The company is now run out of New York City. E*Trade produces those famous Super Bowl ads with the talking babies staring into a webcam.

67. Actress Zadora PIA
Pia Zadora is an American actress and singer. Zadora’s most famous role was in the 1982 film “Butterfly” in which she worked with Orson Welles and Stacey Keach. The film was based on the novel “The Butterfly” by James M. Cain and deals with the difficult subject of father-daughter incest.