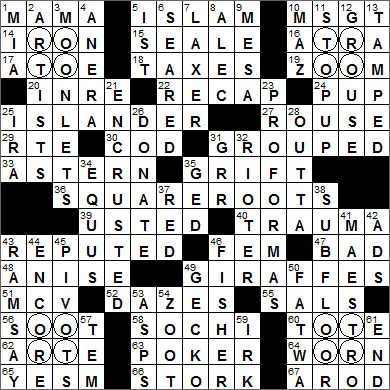 36A. Patrick Creadon documentary about SpongeBob … and what’s found in this puzzle’s circles SQUARE ROOTS

Today’s Wiki-est, Amazonian Googlies
Across
5. Religion with Five Pillars ISLAM
Followers of the Muslim tradition believe in the Five Pillars of Islam, five obligatory acts that underpin Muslim life. The Five Pillars are:

14. Word with man or horse IRON
Iron Man is another one of those comic book superheroes, created by Stan Lee for Marvel Comics. The character has become very famous in recent years since the appearance of the 2008 action movie “Iron Man” starring Robert Downey, Jr. in the title role.

The term “iron horse” starting appearing in Victorian times, describing those new-fangled steam-driven trains and trams that left horse-drawn vehicles in their dust. The term was especially popular in North America where it described steam locomotives.

16. Gillette product ATRA
Fortunately for crossword setters, the Atra razor was introduced by Gillette in 1977. The Atra was sold as the Contour in some markets and its derivative products are still around today.

25. Oahu resident, for example ISLANDER
O’ahu has been called “The Gathering Place”, although the word “O’ahu” has no translation in Hawaiian. It seems that O’ahu is simply the name of the island. One story is that it is named after the son of the Polynesian navigator who first found the islands. The island is made up of two volcanoes, Wai’anae and Ko’olau, joined together by a broad valley, the O’ahu Plain.

30. Source of a nutritious oil COD
Cod liver oil is a nutritional supplement that is rich in omega-3 fatty acids, as well as vitamins A and D. I remember being dosed with the stuff as a kid. Ugh …

35. Dirty money GRIFT
“Grift” is money made dishonestly, especially as the result of a swindle. The term perhaps is an alteration of the the word “graft”, which can have a similar meaning.

48. Licorice-flavored seed ANISE
The essential oil in the anise plant is anethole. Anethole has a licorice-like flavor, and is used extensively in cooking.

55. Mineo and Maglie SALS
The actor Sal Mineo’s most famous role was John “Plato” Crawford, the kid who was in awe of the James Dean character in “Rebel Without a Cause”. Sadly, Mineo was murdered in 1976 when he was just 37 years old. He was attacked in the alley behind his Los Angeles apartment and stabbed through the heart. When an arrest was made it was discovered that the murderer had no idea that his victim was a celebrity, and that his plan was just to rob anyone who came along.

Sal Maglie was a professional baseball pitcher, one of just a few players who played for all three New York teams of his day, namely the New York Giants, Brooklyn Dodgers and the New York Yankees. Maglie was known as Sal the Barber because he was said to give “close shaves” to hitters, frequently pitching on the inside.

56. It may be caught in the flue SOOT
The flue in a chimney is a duct that conveys exhaust gases from a fire to the outdoors. An important feature of a flue is that it is adjustable. When starting a fire, the flue should be wide open, maximizing airflow to get help ignition. When the fire is burning, flow through the flue should be more restricted. The flue needs to be open sufficiently to allow smoke and exhaust gases exit, but not too wide so that too much hot air escapes, dragging cold air into the house from elsewhere.

58. 2014 Olympics city SOCHI
Sochi is a city in the west of Russian on the Black Sea coast. It is the largest resort city in the whole country. Sochi is going through a busy phase in its life. It hosted the 2014 Winter Olympic Games and the Russian Formula 1 Grand Prix from 2014, and is scheduled to host some games for the 2018 World Cup in soccer.

62. Uffizi hangings ARTE
The Uffizi Gallery is one of the oldest art museums in the western world and is housed in the Palazzo degli Uffizi in Florence, Italy. The Palazzo was built in 1560, intended to house the offices of the Florentine magistrates. This original usage gave the gallery its name, as “uffizi” is Italian for “offices”.

67. Yank who missed the 2014 season A-ROD
Professional baseball player Alex Rodriguez earned more nicknames than just A-Rod. He has been called “the Cooler” by some players as there is a perception that teams go cold when he joins them and hot when he leaves. He has also been called “A-Fraud” by teammates because of another perception, that he is over-demanding. On top of all that, Rodriguez was suspended by Major League Baseball for the entire 2014 season, after he admitted to using performance enhancing drugs.

Down
1. Hamm with a kick MIA
Mia Hamm is a retired American soccer player, a forward who played on the US national team that won the FIFA women’s World Cup in 1991. Hamm has scored 158 international goals, more than other player in the world, male or female. Amazingly, Hamm was born with a clubfoot, and so had to wear corrective shoes when she was growing up.

3. Saturn ring components MOONLETS
According to the latest count, Saturn has at least 62 moons, and over 150 moonlets. Moonlets are particularly small satellites, usually less than 1 km in diameter.

8. Knighted Guinness ALEC
Sir Alec Guinness played many great roles over a long and distinguished career, but nowadays is best remembered (sadly, I say) for playing the original Obi-Wan Kenobi in “Star Wars”.

9. Plateau cousin MESA
“Mesa” is the Spanish for “table”, which gives rise to our English usage of “mesa” to describe a geographic feature.

12. Complain GROUSE
It isn’t really clear where we get our verb “to grouse” from (meaning “to complain”). The term was first used as slang in the British Army in the 1880s.

13. Packed tightly TAMPED
“Tamp” means to pack down tightly by tapping. “Tamp” was originally used to specifically describe the action of packing down sand or dirt around an explosive prior to detonation.

23. Projected financial statements PRO FORMAS
The Latin term “pro forma” translates as “as a matter of form”, and is used in English to describe actions or documents that are considered merely a formality. In the world of accounting, a pro forma financial statement indicates hypothetical figures based on previous operations, and are as estimates before actual results become available.

25. Author Levin IRA
As well as writing novels, Ira Levin was a dramatist and a songwriter. Levin’s first novel was “A Kiss Before Dying”, and his most famous work was “Rosemary’s Baby” which became a Hollywood hit. His best known play is “Deathtrap”, a production that is often seen in local theater (I’ve seen it a couple of times around here). “Deathtrap” was also was a successful movie, starring Michael Caine and Christopher Reeve. My favorite of Levin’s novels though are “The Boys from Brazil” and “The Stepford Wives”.

34. Top-of-the-line Hyundai whose name means “horse” in Latin EQUUS
The Hyundai Equus is the largest and most expensive sedan made by the Korean manufacturer. The Equus is often used by limousine services.

35. H.S. equivalency test GED
The General Educational Development (GED) tests are a battery of five tests designed to demonstrate that a student has the academic skills of someone who has graduated from an American or Canadian high school.

41. Baton user MAESTRO
“Maestro” is often used to address a musical conductor. “Maestro” (plural “maestri”) is the Italian word for “master, teacher”. The plural in English is usually “maestros”.

44. “Play it again, Sam!” ENCORE!
There is a famous exchange in the movie “Casablanca” that results in the piano player Sam singing “As Time Goes By”.

49. Insurance spokeslizard GECKO
The Gecko is the “spokes-lizard” for GEICO. When the Gecko was introduced in 1999, he was voiced by actor Kelsey Grammer of “Cheers” and “Frasier” fame. Since then, the Gecko has been voiced by British radio presenter Dave Kelly and most recently by actor Jake Wood, who plays Max Branning on the British soap opera “EastEnders”.

50. Islamic ruling FATWA
In the Muslim tradition, a fatwā is a religious opinion issued by an Islamic scholar (a “mufti”) on a matter of Islamic law. There is a common misconception that a fatwā is a death sentence imposed on a person, and although such a drastic directive is a possible component of the opinion, it is a very rare occurrence.

54. Type of baggy ’40s suit ZOOT
A zoot suit has pants that are fairly loose fitting, except around the cuff at the bottom of the leg. The pants also have a high waist. The jacket of the suit has wide lapels and wide padded shoulders. Zoot suits were popular in the US in the thirties and forties, and were often associated with the African American, Latino American and Italian American ethnic groups. Over in the UK, the zoot suit was worn by the “Teddy boys” of the fifties and sixties. “Zoot” is probably just a slang iteration of the word “suit”.